Knick: The Complete First Season, The 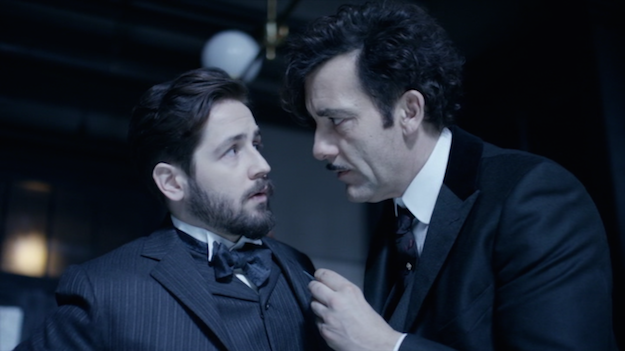 The Cinemax drama series The Knick immediately announces -- with an aggressive blast of synthesizer-heavy music seemingly left over from the It Follows soundtrack (it's actually by Cliff Martinez, a longtime collaborator of series director Steven Soderbergh) and with loose, handheld, wide-angle camerawork (not unlike Soderbergh's first attempt at TV directing, the less polished -- and less satisfying -- K Street) -- that it's not your typical stuffy period piece.

Set in 1900, at a fictional downtown New York hospital called the Knickerbocker*, the show looks to dramatize a time when surgery was moving away from barbershop butchery into a more perfected science done by skilled and knowledgeable physicians. The surgical field was still the Wild West, with many procedures unproven and patients facing a greater likelihood of fatality than would ever be acceptable today. Episodes feature more than a few Mad Men-style moments, in which old medical practices (manually cranked suction machines; X-rays that take an hour) and old attitudes (blatant, unrepentant racism and sexism, of course) are held up for the audience to witness and go, "Wasn't the past weird and unenlightened?," but like Soderbergh's choice in music and shooting style, the main idea is to strip away the years and make the drama immediate to the modern viewer.

Clive Owen stars as esteemed surgeon John Thackery, whose unfettered ambitions fortunately intersect most of the time with his instincts to help the sick. Thackery is also a hopeless drug addict, who needs to shoot cocaine to make it through the day, then winds down most nights in an opium den. He picked up the habit from his mentor, Jules Christensen (Matt Frewer), whose death in the series premiere leads to Thackery becoming the chief of surgery at the Knick.

Rather than accepting Thackery's choice of a second in command, the proper Everett Gallinger (Eric Johnson), the hospital board picks a brilliant candidate from outside to fill the role -- a black doctor named Algernon Edwards (André Holland). If any viewers had a notion that old-timey racism only occurred in the southern United States, the series quickly disabuses them of this notion. Edwards is cursed at, ignored, and slighted by his would-be colleagues and is given an "office" in the basement, near the coal furnace -- where the other black men in the hospital work. In addition to being brilliant, Edwards is also bold and ambitious, so he turns his corner of the basement into a makeshift infirmary and begins secretly taking care of black patients.

The Robertson family are the wealthy benefactors of the Knick, and Cornelia Robertson (Juliet Rylance) is not only the main supporter of Edwards in his position as second-in-command of surgery, but she is also his childhood playmate. (Edwards's parents were, and continue to be, servants in the Robertson household.) Cornelia is proud to work as a social worker in the hospital, and she quietly bristles against the idea of becoming a society wife. Both Cornelia and Edwards are hemmed in by their place in society, and it's unsurprising that they turn to each other for support and succor.

Elsewhere in the hospital, young Dr. Bertie Chickering (Michael Angarano) pines after the new nurse from West Virginia, Lucy Elkins (Eve Hewson). (It's a shame, because Lucy is more fascinated by their boss Thackery's prickly genius than Bertie's genial sweetness.) The hospital administrator, Herman Barrow (Jeremy Bobb), is a spineless sneak who spends more time in a cathouse than with his wife and owes more money to gangster Bunky Collier (Danny Hoch) than is healthy. The tender but tough Sister Harriet (Cara Seymour), who works at the orphanage connected to the Knick, is found out by the hospital ambulance driver Cleary (Chris Sullivan) to be a secret abortionist. Never one to pass up a hustle, Cleary blackmails "Harry" for a prime cut of the action, and the two become unlikely partners.

That's an awful lot of set-up (and I'm positive I must have missed some stuff), but The Knick manages to serve its vast ensemble of characters well, allowing pretty much every one of them to follow interesting and oft-times unexpected arcs over the course of the first season's ten episodes. Many characters, including our main focus Dr. Thackery, cross back and forth between likability and unlikability, succumbing to bad instincts and failing to see reason. But there's a feeling of full-blooded humanity emanating from all of these performances, and the cast is consistently brilliant.

Just as it proves to be different from your average nostalgic period drama, The Knick is also not your average hospital show. Show creators Jack Amiel and Michael Begler (whose resume consists mostly of sitcoms and rom-coms) and director-cinematographer-editor Soderbergh effectively evoke a world in which even the most trusted, knowledgeable men of medicine were still fumbling around in the dark, where innovation often resulted from a mixture of arrogance and accident. As such, though the show has a natural stylish look, it lacks the idealized gloss of something like Boardwalk Empire. Surgeries are performed for bleachers full of curious medical spectators and take on the air of a sideshow; like any good showman, Soderbergh does not skimp on the blood and guts. As we see realistic-looking flesh split open by scalpels, it's impossible to not feel anxious for doctor and patient alike.

Maybe leaving behind feature films has focused Soderbergh, because, for the first time in many years, he seems to have struck a perfect balance between his tendencies toward stylized visuals and editing and his knack for cleaner, more straightforward storytelling. Like the best modern TV shows, The Knick feels like a serialized feature film -- and it's well worth the price of admission.

*There was a real Knickerbocker Hospital in New York, but it was up in Harlem and it didn't get its name until 1913. 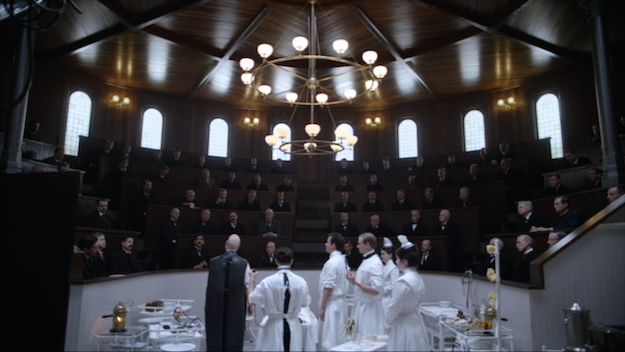 The DVD
The Knick is presented on 4 DVDs, packaged in a standard keepcase. Included inside is a URL for an Apple iBook called The Knick: Anatomy of a Series, which includes script excerpts and a production notes section where Soderbergh replies to Cinemax's suggestions.

The Video:
There are thankfully few compression issues visible during this widescreen 1.78:1 presentation, apart from some occasional noise and a moment or two of banding. Colors are vibrant and saturated. Even though Soderbergh (using his DP alias Peter Andrews) a cooler palette overall, there are many scenes with rich browns and reds. Soderbergh also seems to use a lot of practical light, which means some shots are quite dark (sometimes verging on muddy) but typically the video offers surprising latitude in the shadows, with strong shadow detail.

- All three of these tracks are group commentaries with creator-writers Jack Amiel and Michael Begler, plus actors Michael Angarano, Jeremy Bobb, Eve Hewson, Cara Seymour, Eric Johnson, and Chris Sullivan. No Soderbergh or Clive Owen, but it's a pleasant full house with these folks anyway. Lots of laughter and silliness -- even during some patently depressing bits -- and plenty of good production anecdotes too.

Final Thoughts:
Steven Soderbergh brings his experimental sensibility to episodic television again, and this time it works like a charm. The Knick is stylish, smart, and superbly acted. Clive Owen may be the only name you recognize going in, but you will soon be the biggest fan of the entire cast. Highly Recommended. 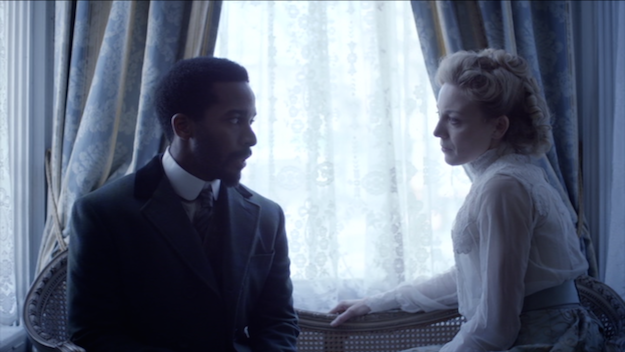