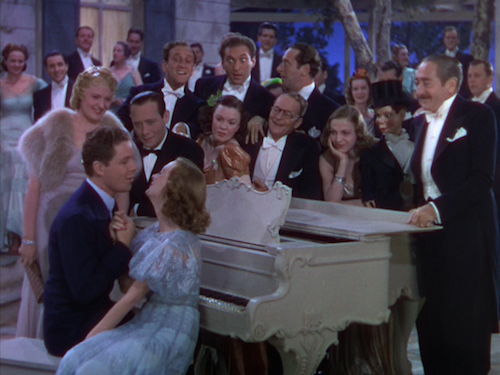 In the late '70s, Harry Medved and Randy Dreyfuss dubbed 1938's The Goldwyn Follies one of the "Fifty Worst Films of All Time" in their book of the same name, but that claim certainly does not hold up. Sure, this mishmash of musical numbers and comedy routines is held together by a limp, ridiculous story, but I'm pretty sure I've seen fifty films far worse than these Follies in the past few years, not to mention the whole of time. And more to the point, those musical numbers and comedy scenes are a lot of fun.

This whole shebang is based around the picture business and specifically the travails of a beleaguered Hollywood executive, Oliver Merlin (Adolphe Menjou), who seems to have lost touch with what audiences want. His last drama was such a stinker that the crowd laughed their way out of the theater. As his new tone-deaf production is being filmed on location, Merlin overhears the critical grumbling of onlooker Hazel Dawes (Andrea Leeds) and, since Goldwyn Follies was made decades before the invention of internet comment sections and Twitter, he figures that Hazel must be on to something because she's a regular person. Merlin hires Hazel on as his taste barometer -- "Miss Humanity," he calls the position -- and turns to her to decide whether an idea will work with normal people or not.

I'm sure that even in 1938 this seemed like a bad idea for the Merlin character, but the movie proceeds right along like Hazel is a creative breath of fresh air. Merlin has her watch a dance number inspired by Romeo and Juliet, in which the star-crossed lovers' families are conflicted over whether ballet or jazz dancing is best. Hazel's main note to Merlin is that she doesn't want them to die at the end, and because he has obviously lost his damn mind, Merlin has them re-do the end of Romeo and Juliet to make it a happy one.

Elsewhere, Hazel's input has significant rippling effects on the casting of the film. In a quite funny running gag, Phil Baker plays an accordion player whose role is constantly being re-written out of the script and replaced with a new and different costume-and-makeup-intensive part, including a gigolo with excessively pointy sideburns and a Lionel Barrymore-esque old man with a bushy beard and a hump on his back. Hazel also comes across a hamburger-flipper named Danny (Kenny Baker; no, not the guy who played R2-D2), belting out tunes in a sweet tenor as he forms his little ground beef patties. She falls for the guy and contrives a way for Merlin to hear Danny sing, so he can land the lead in the movie. However, despite incorporating the first appearances of two of Ira and George Gershwin's best known love songs, "Love Walked In" and "Love Is Here to Stay," the romance plot lacks spark and probably should have been trimmed a bit.

Much more satisfying is the shtick-ery of the Ritz Brothers, as a trio of animal trainers run riot on the studio lot. There are particularly good, performing a comic song called "Here, Pussy Pussy," in a room overflowing with kittens, and later taking turns posing as a Russian alpha male, in an attempt to seduce the leading lady Olga (ballerina and then-wife of George Balanchine, Vera Zorina). Ventriloquist Edgar Bergen and his wooden buddy Charlie McCarthy pop up around the lot as well, wise-cracking about the idiocy around them -- and also trying to seduce Olga.

And speaking of Olga, Vera Zorina is so good in this movie that I'm surprised Zorina didn't have a bigger career in film. She's breathtaking when she dances in the late-film "Water Nymph Ballet" and she's a delight in her comic acting scenes, brilliantly portraying a narcissistic star with no self-awareness. A skillful ballerina-comedienne is not the kind of hyphenate you come across every day.

The film also features an operatic excerpt of La Traviata, but honestly the only tunes that will have any lasting impact on viewers are those Gershwin numbers, including an Ira lyric on "Spring Again," which was composed by Vernon Duke after George died mid-production. Oh, and that "Pussy" song, of course. 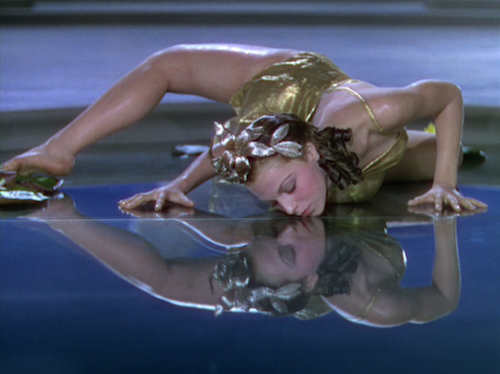 The DVD
This reissue of The Goldwyn Follies comes to us from Warner Archive Collection on a manufactured-on-demand DVD-R.

The Video:
This movie has been released on Region 1 DVD twice before, more recently by MGM in 2009. I do not have either of the old discs to compare, but based on dated-looking 4:3 menus, I am guessing that this is actually just a straight-up dupe of the 1998 HBO release. DVD Talk gave the MGM video transfer four stars out of five, and I wouldn't be surprised if it was the same or similar to the strong standard 1.33:1 transfer presented here. Gregg Toland's Technicolor cinematography looks vibrant and clean, with only occasional color instability. The detail is pretty good, although sometimes the image shows signs of digital compression, particularly in the shadow areas.

The Audio:
The Dolby 2.0 mono audio is clearly dated, but mostly problem-free. I certainly had no problem understanding the dialogue, and the music sounded good. I noticed a little bit of surface noise and hiss in the middle of the film, but nothing dramatic. The disc has both English subtitles and closed captioning.

Final Thoughts:
This film is really just a compilation of moments, but quite a few of those moments are plenty entertaining. The dialogue is often smarter than the plot it serves, but should this flick really make the "Bottom 50"? No way. Recommended. 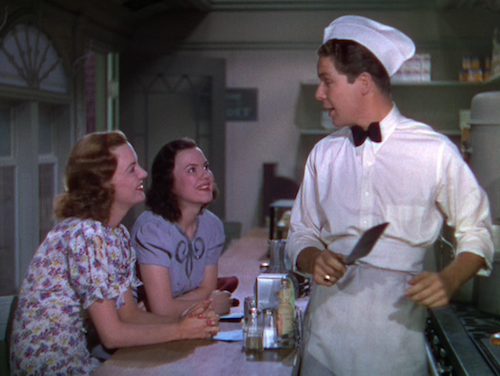