Telling the same story from different points of view has been a popular narrative device since Akira Kurosawa's jidaigeki masterpiece Rashomon ushered in the possibility that the way a story can come across in a movie might differ depending on who's telling said story in the first place. This approach goes hand-in-hand with the most superficial conceit of cinema, since every story we witness in film history is told from the perspective of at least one character. And since people are notoriously unreliable when it comes to telling their stories with direct honesty, some embellishments are bound to be present in every narrative film. The "same story via multiple characters" approach blasts open the illusion that every story is essentially the unbiased truth and isn't tainted by the teller's specific point of view. 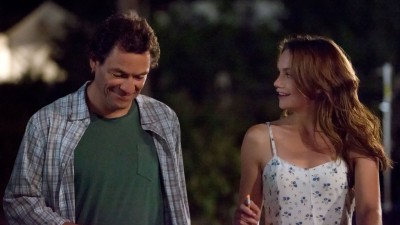 In Western cinema, this approach is usually utilized in action movies and thrillers like Courage Under Fire and Vantage Point, focusing mostly on plot details and twists that might have been concealed or twisted by a character, only to be revealed to be entirely different by another one. Using such tricks in genre efforts makes sense, since having the audience question whose side of the story they can trust efficiently promotes tension. Showtime's excellent new show The Affair, takes a similar approach to drama, and tells the progression of an affair between two married people from through own distinct perspectives. Each episode is split into two parts, one told from the point of view of the male side of the affair, and the other from the female side's perspective.

As the season begins, struggling writer Noah (Dominic West) goes to his rich in-laws' mansion in The Hamptons with his family for the summer. Frustrated by his writer's block and his ego crushed by the giant shadow of his best selling novelist father-in-law (John Doman), Noah is already open for a distraction from his failed existence and his seemingly perfect but unfulfilling married life. The show does a great job setting his inner conflict right off the bat, with a brilliant visual scene that shows Noah see an alternate romance blossoming at a swimming pool, only to be destroyed when the woman who's clearly interested in him notices his wedding ring.

At first, a free-spirited waitress named Alison (Ruth Wilson) appears to be the perfect distraction for Noah. Their meet cute is playful, and offers just the right kind of seduction, at least from Noah's perspective, but as the two inevitably pull themselves into a deeper and more personal relationship, the pain that was hidden underneath both characters begin to emerge. As far as Alison is concerned, a tragedy in her past reveals the kind of grief that Noah or anyone else might not be equipped to deal with. As the season continues, a mystery surrounding a missing person begins to unravel, and depressing truths behind a town that looks like paradise on the surface begin to bubble up.

The creators of The Affair, Hagai Levi and Sarah Treem, were two of the creators of HBO's In Treatment, about a therapist who sought the help of another therapist when he lost faith in his abilities. Levi and Treem bring that show's delicate yet brutally honest approach to human psychology to The Affair, creating a world where the tiniest nuance in what all of us perceive to be our reality is our only link to tangible truth. The first couple of episodes focus on small differences between Noah and Alison's perspectives. Scenes take plane at the same time and in the same location, but the dynamic between the characters are always different.

As the episodes progress and a mystery begins to form, entirely different stories start to emerge from both Alison and Noah, until each section of each episode begin espousing separate narratives. The use of a detective's interrogation as not only the framing device for each episode, but also as a practical reason for why we're watching two different versions of the same story is also very clever. 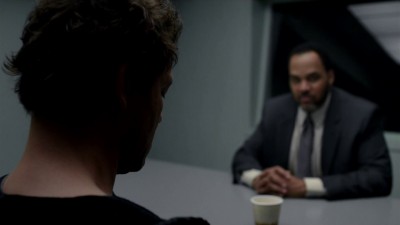 As HD streaming and Blu-ray becomes more and more the norm in home video, we're completely ignoring the recent advancements in DVD transfers. Yes, that makes sense since DVD is an SD format, but I have to admit that it would have taken me a minute to figure out that I wasn't watching The Affair from an HD source even on my fairly large 55-inch screen. And considering four hours worth of episodes are crammed into each disc, the clarity and depth in the picture is revolutionary.

The Affair comes to DVD in a lossy Dolby Digital 5.1 track, and does a decent job for a premium cable drama. The dialogue is clear, there isn't a lot of surround presence, and the subtle score showcases a lot of depth. Unfortunately, there aren't any subtitles in this release, but you can turn on closed captioning if your player supports it.

Character Profiles: Five 2-3 minute featurettes focusing on each character on the show via clips and interviews. This isn't necessary if you've seen the show, since they appear to be promotional teasers to get you to watch it in the first place.

Tale of Two Costumes: A 3-minute featurette on the importance of costumes in the show, since they change depending on each character's perspective. If you weren't paying attention, you might have missed some of those differences. This is interesting, I wish it was longer.

The 4th disc is more like a demo for Showtime's other shows, containing the first two episodes of Happyish, and the pilot episodes of Ray Donovan and Madam Secretary.

The Affair is an intelligent and thoroughly thought-provoking show that turns a cheap trashy romance novel-like premise into one of the most fascinating shows on contemporary TV. It cleverly expands on its affair premise in order to deal with more universal themes like grief, personal identity, greed etc… until the location and the characters all breathe with life.