Flicker Alley // Unrated // March 18, 2015 // Region 0
List Price: $19.95 [Buy now and save at Createspace]
Review by Stuart Galbraith IV | posted June 2, 2015 | E-mail the Author
Part of Flicker Alley's welcome new line of manufactured-on-demand silent classics, The Lost World (1925) is a shrewd early title to lead off with. The still-entertaining fantasy adventure is famous for its stop-motion dinosaurs and other special visual effects by pioneering animator Willis O'Brien, eight years before O'Brien did even better work for the classic King Kong.

Adapted from Arthur Conan Doyle's 1912 same-named novel (Doyle briefly appears as himself in the film's prologue), the movie served as the template for innumerable imitators and remakes, including producer-director Irwin Allen's gaudy, ludicrous 1960 film of the same name, and the vaguely related The Lost World: Jurassic Park (1997), from director Steven Spielberg.

Flicker Alley's release, produced for DVD by Serge Bromberg and David Shepard, is at 93 minutes a good half-hour longer than most previously available versions. Additionally, this Blackhawk Films presentation sources far better film elements than the myriad public domain releases out there. The Flicker Alley version has been appropriately tinted throughout, and accompanied by a musical score by Robert Israel and performed by the Alloy Orchestra. 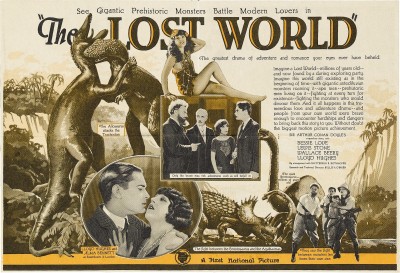 Combative Professor Challenger (Wallace Beery) is a British scientist ridiculed, mostly by ribald university students, at an academic meeting where he proclaims long-thought-extinct dinosaurs and other prehistoric creatures live and breathe atop an isolated plateau deep in an unexplored region of the Amazon.

Though he violently hates reporters, Challenger accepts the advice of young reporter Edward Malone (Lloyd Hughes), friend of great white hunter Sir John Roxton (Lewis Stone), to have his newspaper finance a new expedition. Challenger agrees to have Malone and Roxton accompany him, along with Paula White (Bessie Love), whose father's journal provides sketches made before he mysteriously disappeared on the plateau; skeptic Professor Summerlee (Arthur Hoyt); Austin (Francis Smith-Smiles), Challenger's manservant; Zambo (Jules Cowes), a dark-skinned Indian guide; and Jocko, a monkey Challenger regards as a valued member of the team. The monkey proves his mettle later in the story.

Reaching their destination, the party finds plenty of dinosaurs practically swarming the plateau: an allosaurus, a triceratops, stegosauruses, etc. Other than the addition of Paula White, the movie follows Arthur Conan Doyle's novel quite closely until the halfway point. In the novel the explorers are besieged by ape-men, while the movie offers but a single ape-man, actor Bull Montana wearing impressive makeup, whose character is accompanied by a chimpanzee. (A relative, perhaps?)

The novel climaxes with Challenger returning to London armed with a captured pterodactyl to prove his claim, but the movie has bigger dinosaurs to fry. In the movie, Challenger manages to bring back a full-grown brontosaurus, which like the pterodactyl in the novel escapes, making The Lost World literally the first giant-monster-on-the-loose picture. (It was also, tangentially, the first movie ever shown on a commercial airline flight.)

If The Lost World's narrative comes off as a little rudimentary that's only because so many movies since, mostly low-budget (e.g., Unknown Island, The Lost Continent, etc.), have stolen much of its plot. As noted in similar remarks for my review of 42nd Street: they weren't clichés back then.

The use of stop-motion animation dates back to the earliest days of film; The Humpty Dumpty Circus (1897) is sometimes cited as the first known example. Willis O'Brien began experimenting with the form around 1915, and three years later did his first major work, the partly-lost The Ghost of Slumber Mountain (1918), featuring screendom's first iconic battle between a big, bad tyrannosaurus and a plucky, heroic triceratops. That film was a big success, but the producer proved a credit hog and possibly a crook; O'Brien got very little credit or money for his labors, the first of a mostly lifelong series of disappointments.

Later wizards such as Ray Harryhausen (Obie's protégé), Jim Danforth, and Dave Allen refined the art and technology of stop-motion animation, and compared to their films, most of the The Lost World is crudely animated. There's much more jerkiness, as there would later be in O'Brien's King Kong as well. The dynamism of that later film's cutting, Max Steiner musical score, and composition more than compensated for technical shortcomings (which one hardly notices at all). Nevertheless, the stop-motion of The Lost World is still pretty dazzling, especially about two-thirds of the way through the picture when there's a volcanic eruption, and in some shots seven, eight, or more dinosaurs of different species are all fleeing at once. Further, the blending of the live actors with the animation is startlingly good for the time. A famous story has Conan Doyle showing test footage to the Society of American Magicians, including Harry Houdini, who reportedly were all baffled and amazed by the trick.

Flicker Alley/Blackhawk Films' presentation of The Lost World is generally excellent. The film is presented at the correct viewing speed, and the tinting adds enormously to the presentation, which sources surprisingly good-looking film elements for almost all of its running time. The audio on this region-free disc is fine, and the intertitles (English only, with no other subtitle options) are also good.

Insert the disc and the movie starts up right away. There don't appear to be any menu screens at all, with the lone extra feature, more than 13 minutes of fascinating outtakes (sometimes crew people are visible moving about the stop-motion sets), stuck after the movie, so the only way to access that is to skip ahead to the last chapter.

Though one wishes Flicker Alley could make these releases available in 1080p high-def Blu-ray format as well as standard-def DVD, this Lost World is still the best version available to date and Highly Recommended.