He Ran All the Way

The tense 1951 noir He Ran All the Way served as actor John Garfield's final onscreen bow, playing a feisty small-time hood on the lam. Co-starring Shelley Winters in one of her earlier, vulnerable-girl roles, this lean, mean little crime drama is finally getting a proper U.S. release on DVD and Blu Ray via Kino Lorber's Studio Classics line.

A competently made, middle-of-the-road thriller, He Ran All the Way pretty much plays to Garfield's strengths without straying from his established screen persona as an outcast from society. Garfield himself is great, however, as a weathered yet magnetic loser named Nick Robey - forever on the make for easy cash while living in a downtown L.A. hovel with his boozy mother (Gladys George). On a tip from his weasely pal, Al Molin (Norman Lloyd), Nick goes along on a plan to rob a company payroll in the city's warehouse district. When the heist goes horribly wrong, leaving Molin and a police officer dead, Robey escapes into a public pool with the briefcase full of stolen cash. Aware that cops are swarming the pool looking for him, Molin takes cover by pretending to flirt with a bathing girl, Peg (Shelley Winters). While the shy Peg ends up getting rejected and hurt, she nevertheless agrees to let Robey take her home to her apartment. After arriving and meeting Peg's parents, Mr. and Mrs. Dobbs (Wallace Ford and Selena Royle) and her cheeky kid brother Tommy (Bobby Hyatt), the increasingly paranoid Robey decides to reveal his true identity. The Dobbs family is eventually taken hostage in their own home, while the gun-toting Robey threatens to kill them unless they can help arrange his escape. While the parents and son desperately try to figure a way out that ensures the family's safety, Peg becomes conflicted by her own romantic feelings toward the paranoid fugitive.

While the passive, spineless character thrust into a desperate situation remains a common noir story device, He Ran All the Way is notable for having both lead characters fit that type. Despite his bluster, Garfield is essentially a big pussy - and he meets his match in Winters, a meek bakery employee who prefers quiet nights at home to double-dating. Like Garfield, Winters does a decent job in a role that adhered too safely to the passive, wounded-lady roles she was already known for.

Aside from the weaknesses of the lead characters, He Ran All the Way satisfies as solid if unspectacular crime drama. Director John Berry creates a good sense of slowly building tension as the hostage situation becomes more urgent (Berry had also directed the overlooked MGM noir drama called, unsurprisingly, Tension). There's also a lot of interesting stuff going on with the cinematography, with creative uses of deep focus and dynamic compositions. While the acting overall tends to be too histrionic, Garfield himself remains a fascinating screen presence. Knowing the strain he was going through in his personal life at the time (being hounded by anti-Communist zealots) makes his haunted performance all the more tragic. 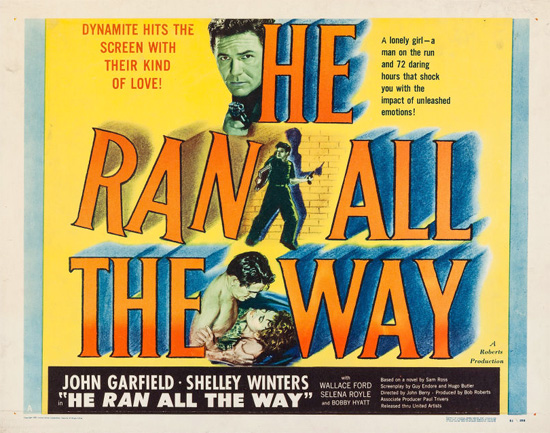 Kino Lorber's Studio Classics edition of He Ran All the Way presents the film pillarboxed in its original 1.33:1 aspect ratio. The black and white image appears slightly over sharpened. It was mastered from a print in relatively decent shape, however, with only a few isolated white specks and artifacts. The image avoids looking too contrasty, with a pleasant range of grays even in the nighttime exterior scenes.

The mono soundtrack is dynamically limited yet well-mixed, with relatively clear dialogue and not too much hiss during the louder portions such as the opening credits scoring. No subtitle options are provided.

The movie's spoiler-happy original Theatrical Trailer is included, along with trailers for similar Kino Studio Classics releases A Bullet for Joey and Witness to Murder.

Solidly done if unspectacular hostage picture He Ran All the Way is worth a look for fans of John Garfield, in his final film. Docked a few points for passive, wimpier-than-wimpy characters, it's otherwise a nifty little crime drama whose arrival on Blu Ray is long overdue. Recommended.