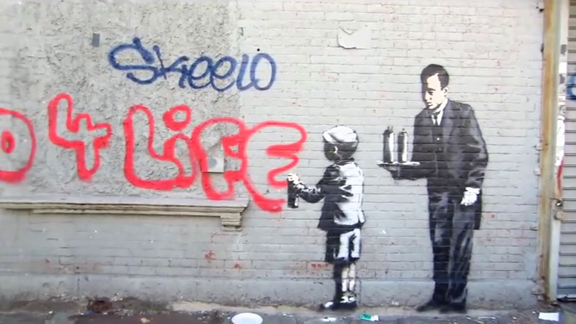 Through a collage of interviews, tweets, Instagram pictures and YouTube videos, the HBO documentary Banksy Does New York entertainingly covers the secretive London-based street artist's October 2013 daily assault on Manhattan and its boroughs. If 2010's Exit Through the Gift Shop was the comprehensive A-to-Z encyclopedia on the elusive man (or woman?), consider Banksy Does New York the supplement, 2013 Edition, or Banksy 2.0.

Given the subject, there's a lot about Banksy Does New York that's ridiculous, cringe-worthy, provocative and just plain surreal. On the one hand, the documentary is a straightforward run-through showing the results of the provocateur's one-a-day month-long residency in New York - one piece a day, mostly public murals in and around Manhattan executed in the dark of night under complete secrecy. On the other hand, it delves into questions about art, its legitimacy in a post-internet landscape, and the idiocy of a scene that places such a high value on famous names (like Banksy) that carry a disproportionate amount of weight in the cloistered art gallery world (unlike Banksy).

Banksy Does New York documents each of these pieces as they were done, scavenger hunt-style, once a day in chronological order, with a handy animated map showing where the work was shown. Some go along with the same stencil-based trenchant commentary he's known for, such as the image of a robot spray-painting a UPC code from October 28th, or the beaver positioned next to an overturned lamppost unveiled on October 10th. Others are much more elaborate installation works, like October 5th's ornate landscape diorama inside a truck - a wry comment on the irony of providing a peaceful oasis for the hoards of cellphone-toting fans clamoring around the piece to get a photo (which undoubtedly looked a whole lot similar to the 1,000 other photos taken that day). There were also a few online-only pieces, but most of them had Bansky (or his assistants) putting them out in the neighborhoods to be consumed in whatever way they ended up. Once the crowds of Bansky hunters started showing up, we witness how the art ends up getting photographed, painted over (one in a matter of hours), defaced by local taggers, covered in plexiglass, cut out, removed, or even stolen by greedy strangers.

Banksy's works have always thrived within the context of them being public pieces, done in outdoor spaces without the property owner's consent. While it's a common enough occurrence with ordinary street artists, Banksy Does New York illustrates the higher stakes involved with an artist of his stature. Director Chris Moukabbel documents how the reactions to each day's piece is as much a part of the art as the piece itself - not just with sit-down interviews, but with superimposed tweets, videos and other online reactions from his fans. He also points out the differences between someone like Banksy who engages with an audience who ordinarily wouldn't set foot in an art gallery or museum, and the very art establishment which turned up their collective noses at an outsider who prioritizes expression over making money. Further opposition is documented from New York's then-mayor, Michael Bloomberg, and local street artists who view the British interloper as a sellout. Like Exit Through the Gift Shop, this effort shows the strange spot Banksy occupies as a three-pronged -ist - artist, populist, and activist.

By far, the most fascinating parts of Banksy Does New York delve into the value of art and exposure, questioning the motives of people who behave like rapturous leeches just because a piece has a well-known name attached to it. This is shown in segments with a sleazy European art dealer negotiating with some modest-living auto mechanics for a sphinx sculpture erected near (not on) the mechanics' property. That in itself is pretty absorbing, yet it pales next to Banksy's own October 13th exercise. On that day, he set up a sales booth at an art fair in Central Park, with an unassuming old man offering up original spray-painted canvases for sixty dollars apiece. The documentary shows what transpired, with only a few sales to passers-by looking for interesting stuff to hang on their walls. It's astonishing enough to contemplate that he was able to pull this off while hundreds of Banksy fans were searching everywhere for his work. The final kicker is the fact that those simple $60 canvases were later valued at a quarter of a million dollars apiece. This is the kind of documentary that makes you feel queasy that anyone would place that high a value on a stenciled shape spray-painted on canvas, then be in awe that Banksy himself was able to stay one step ahead of all that ridiculousness. 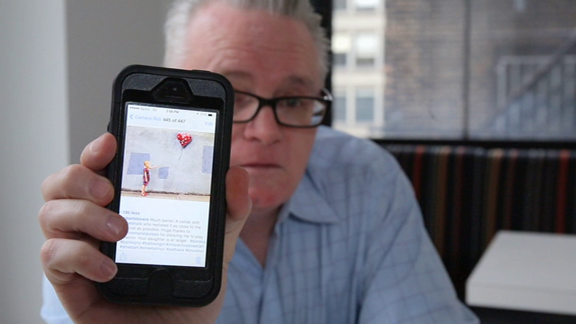 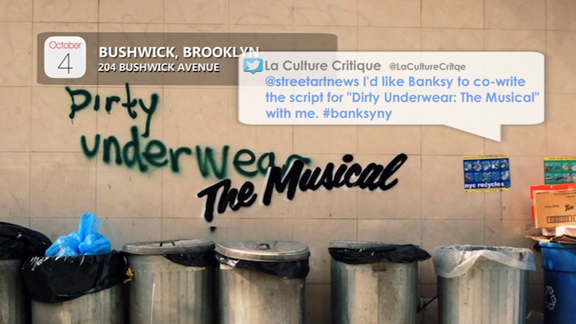 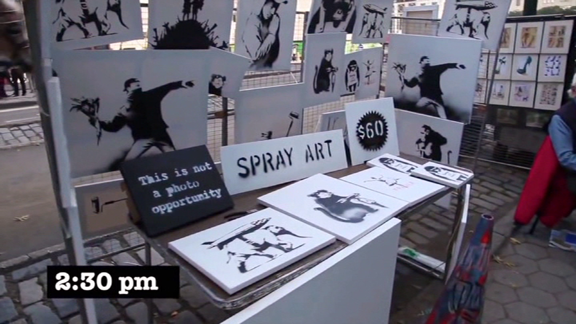 The disc comes with the 2.0 Stereo mix from its original HBO broadcast, a good mix with pristine, artifact-free dialogue and music. The volume balance is pleasantly even throughout. Again, the sounds from the second-hand sources are less dynamically pleasant, but they don't occur often enough to detract from this otherwise nice-sounding track. An optional English closed captioning track is also provided.

Although I wish this disc had bonus interviews with the filmmakers - or something - the DVD only comes with a 2-minute trailer.

Blimey - Banksy Does New York documents the elusive British street artist's month-long residency in New York, secretly executing an artwork around the city on each day of October 2013 (how could anyone forget those crying stuffed animals in the truck, shuttling through the meat-packing district?). Kino Lorber's DVD edition is a disappointingly plain package, but those who missed it on HBO will discover a fascinating statement on art and the value we place on it. Recommended. 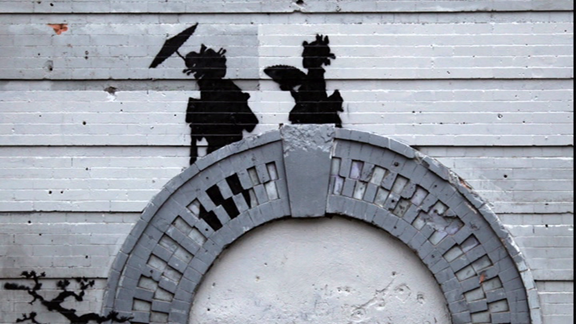 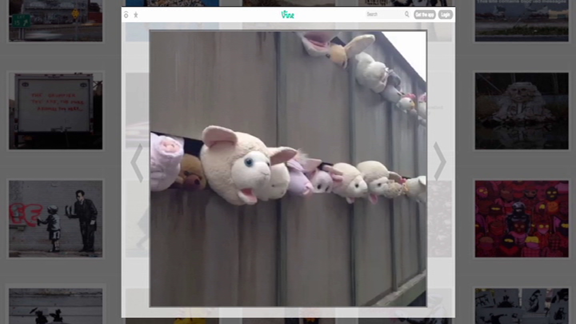 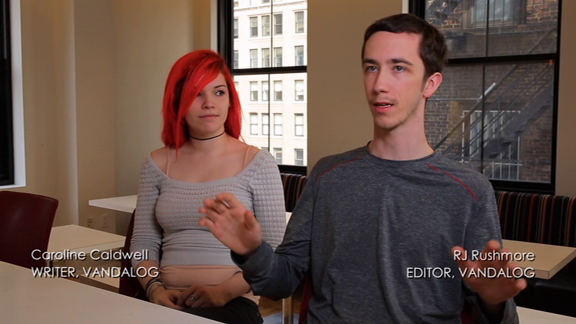