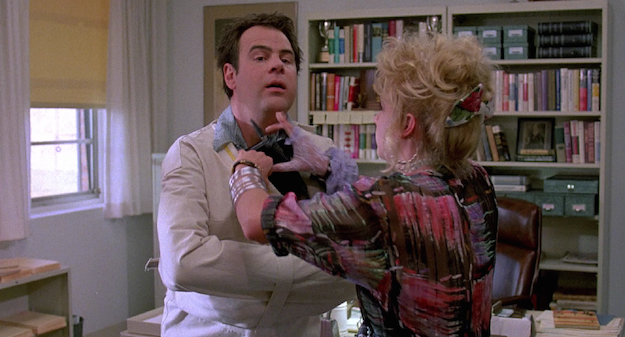 The 1988 comedy The Couch Trip is utterly preposterous, but it is also oddly winning and definitely funny. It stars Dan Aykroyd, arguably in top form, as fast-talking con man John Burns, who starts out the film in a mental institution after worming his way out of a prison stretch. A goofball variation of J.P. McMurphy from Cuckoo's Nest, Burns is a master manipulator well-liked by his fellow patients and despised by the doctor who heads up his ward, Lawrence Baird (David Clennon).

When a bizarre, high-paying con job falls into his lap, Burns escapes from his institution (thanks in part to Baird's secretary, played by Victoria Jackson in her Saturday Night Live heyday) and poses as Dr. Baird. Beverly Hills shrink George Maitlin (an unrepentantly unhinged Charles Grodin) attempts suicide during a slow crack-up, so his neurotic wife (Mary Gross) and double-dealing lawyer (Mean Streets' Richard Romanus) figure he should take a break while someone else takes over both his practice and his popular call-in radio show. Burns, assuming the role of Baird, takes the gig and immediately starts to shake things up. He says shocking, FCC-unfriendly things on the radio. He tells a patient to cope with the frustrations in her daily life by barking at them like a dog. He immediately becomes a big hit, which allows him to extort a $200,000 cash advance out of the lawyer.

Of course, in the time during which he must wait out his cash delivery, Burns grows some unfortunate attachments. Walter Matthau plays a kleptomaniac who becomes Burns's sidekick by virtue of the fact that he recognizes the clothes Burns wears as state facility-issued and blackmails him into a vague partnership. Though Matthau's unkempt hair and tattered priest outfit do more to underline the character's potential insanity than anything in his performance, it is immediately apparent that these two societal outsiders are simpatico. Burns also manages to charm a fellow (make that, a real) psychiatrist, played by Donna Dixon (Aykroyd's real-life wife; they met on Doctor Detroit).

The fact that Burns has a conscience is key not only to the later turns of the plot, but also to Dan Aykroyd's performance here. Aykroyd taps into a similar smartass attitude as his former SNL buddies, Bill Murray and Chevy Chase (the latter of whom has a ridiculous and fun cameo in this film), but he replaces their aloofness with a foundation of concern for people who are getting the short end of the stick. The reason that his blunt responses to the folks coming to his character for help work beyond simple shock value is that Burns doesn't care about the job, but he seems to genuinely care for human beings.

That good-natured core extends to the film as well, which gives viewers a reason to forgive the many flaws in the plotting. The script is reportedly based on a novel by Ken Kolb (whose work was also the basis of the Elliott Gould movie Getting Straight) but feels like it could have just as easily resulted from director Michael Ritchie (The Bad News Bears, Fletch) going around to the trailers of his cast members on each shooting day and asking, "So, whatcha wanna do today?" If the cast wasn't so disarming and complimentary to each other -- watching Matthau's cynical, wordless reactions to Aykroyd's blustery monologues is truly wonderful -- it would be more tempting to point out that most of this film makes no damn sense, except maybe on a scene-by-scene basis.

In a nutshell, The Couch Trip is a film that shouldn't work (and, at the time of the film's release, many critics didn't think it did work). But director Ritchie and his great cast take this sketchy story and make it quite satisfying. 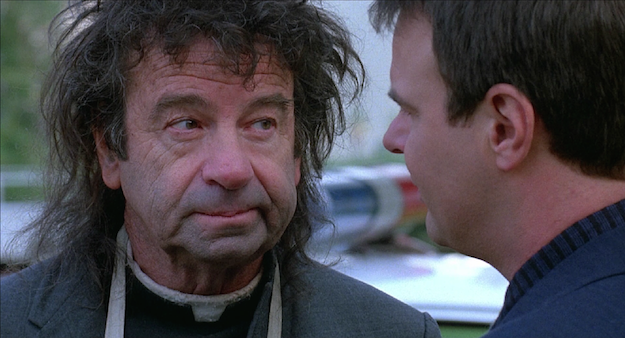 The Video:
There's some inconsistency in the AVC-encoded 1080p 1.85:1 presentation of The Couch Trip, but these issues seem to be present in Donald E. Thorin's original cinematography rather than an issue with the encoding of the film. Bright outdoor scenes look great, with vivid colors and crisp detail. Night scenes, however, tend to look like they were pushed during processing and are surprisingly grainy. I kind of like that and don't really see it as a flaw, because it gives me a nostalgic pang for films of this era. In other words, this seems like an accurate transfer, but not necessarily one that will satisfy viewers who want their video mastered from 4K with pristine results.

The Audio:
The DTS-HD MA 2.0 stereo audio mix is problem-free but unremarkable. The disc offers an English subtitles option.

(7:13) - A vintage EPK that is a little heavy on clips from the movie, but has some interesting on-set footage and some fun soundbites from the actors and director Michael Ritchie.

Final Thoughts:
The Couch Trip is one of the most poorly thought-out comedies of the '80s that is also still really funny and fun to watch. The unbeatable cast and ingratiating atmosphere created by director Michael Ritchie make the improbable plot easy to ignore. This new Blu-ray gives the film a solid A/V upgrade and dredges up some vintage bonus material previously unavailable on the old DVD. Recommended. 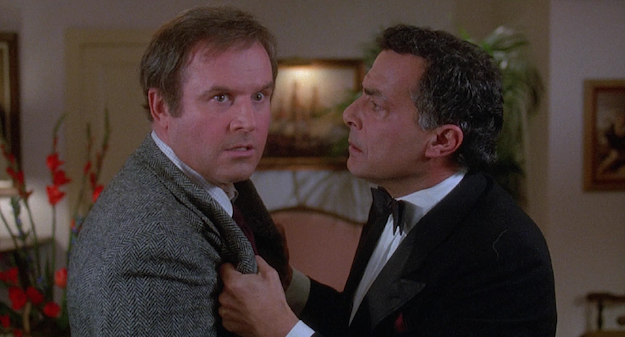