Still of the Night

Ah, Still of the Night - so much potential, so little gain. If this 1982 Hitchcock-light thriller is remembered at all, it's for serving as a pit stop in Meryl Streep's ascent toward being cinema's most skilled chameleon. To her credit, Streep performs adequately enough as an enigmatic New York sophisticate who might be a serial killer, pursued by a solid, grim Roy Scheider as the psychiatrist who's fallen hard for the femme fatale. Those in the market for a low-grade '80s homage to classic suspense thrillers would likely do all right with Kino Lorber's Studio Classics Blu Ray, which presents the film looking great but with only a few trailers as extras.

In the right hands, Still of the Night could have been a bracing, stylish little throwback. Director/screenwriter Robert Benton (Kramer Vs. Kramer; Places in the Heart) dutifully visualizes the material with little to no feel for the genre, handling an implausibility-stuffed story with the same icy, emotionless demeanor as Streep's cool antiquities appraiser, Brooke Reynolds. Filmed throughout Manhattan, the movie wasn't short on atmosphere, and it was well-cast with the supporting talents of Jessica Tandy, Joe Grifasi, Sara Botsford and Josef Sommer. When released in 1982, however, Brian de Palma had upped the Hitchcock-homage game with the violent, vivid Dressed to Kill. The relative mildness of its story must have been a factor in the movie's lackluster reception (I remember so much on a Sneak Previews installment with Gene Siskel and Roger Ebert), while the ensuing years have only increased its obscurity.

Still of the Night's plot takes a lot of stock suspense/mystery tropes and shuffles them around in intriguing ways. There's a distance to the whole enterprise that makes it hard to get into, however. This could be due to the script's lack of lightness and humor, or the unexplained motivations of the characters, or the lead actors' lack of chemistry - or all of the above? Whatever the reason, it starts off decently enough with Scheider's Sam Rice, a competent yet emotionally distant psychiatrist going through a divorce, discovering that one of his patients has been brutally murdered. Soon he is visited by an alluring blonde, Streep's Brooke Reynolds. Brooke reveals to Sam that she was the dead man's mistress, fearful that she's considered the prime suspect in his murder. Brooke entrusts Sam to return the watch belonging to his patient to the dead man's widow. Before Sam can contest the idea, however, she takes off.

While a hardened New York City police detective, Joseph Vitucci (Joe Grifasi), queries Sam and Brooke about the dead man, Sam pores through his files on victim George Bynum (played in flashbacks by Josef Sommer) hoping to find clues. In the process, he finds excuses to visit the mysterious Brooke and falls in love with her. The details of George's past and his relationship with Brooke are revealed in a clunky way, via Sam's flashbacks to his sessions. The script also supplies a convenient excuse for Sam to air his thoughts through visits from his mother, Grace (Jessica Tandy), a retired psychiatrist. Although these scenes essentially function as an excuse to load more exposition onto the plot, Tandy's spark make them, surprisingly, the movie's most Hitchock-like segments.

For the most part, Benton evokes 1940s crime melodramas here with the same finesse he applied to 1977's The Late Show. Unfortunately, Still of the Night has a lot of logical inconsistencies that are glossed-over, while Scheider and Streep have a crucial lack of spark. Streep gives her character a vulnerable, wounded-bird quality which is fascinating to watch, yet completely at odds with how Brooke was written. Streep's approach makes the story ridiculous when Brooke is pegged as being a serial killer, and predictable when the outcome unfolds. When the film positions Brooke as a cavalier seductress, it comes off not so much alluring as awkward. The final results end up fairly intriguing, yet frustrating for all its wasted potential. 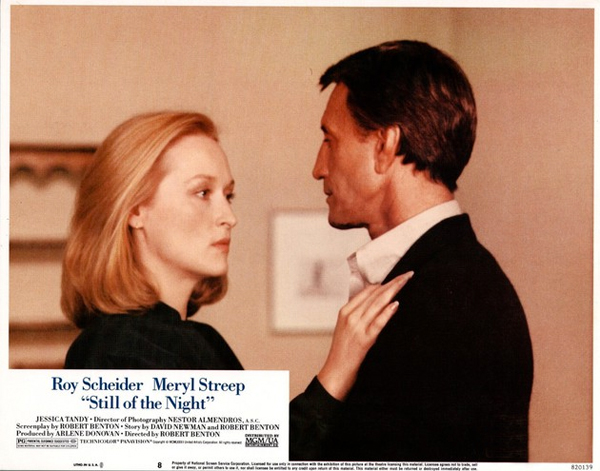 The well-mastered 1.85:1 widescreen image on Still of the Night ends up looking warm and beautifully detailed on this Blu Ray edition. There are a few bits of dust here and there, while film grain appears intensified on a few scenes. The color is somewhat faded yet richly balanced and lifelike. Overall, I was impressed by how nice this transfer turned out.

The film's original mono track is the sole audio option on this disc, a good, atmospheric mix that only gets a little distorted during louder passages. Considering the movie's age, dialogue track is surprisingly clean and pleasant. An optional English-language subtitle track is also provided.

The movie's original Theatrical Trailer is included, along with trailers for other Kino Studio Classics releases starring Roy Scheider - Last Embrace (1979) and 52 Pick-Up (1986).

Meryl Streep recently singled out 1982's Still of the Night as the one film she wished she'd never done, a damning assessment for this flawed, entertaining Hitchcock homage co-starring Roy Scheider. While Kino Lorber's Blu Ray edition is the best this Robert Benton thriller has ever looked, it remains what it's always been - a curiosity. Worth a single watch, but a keeper? Nah. Rent It.