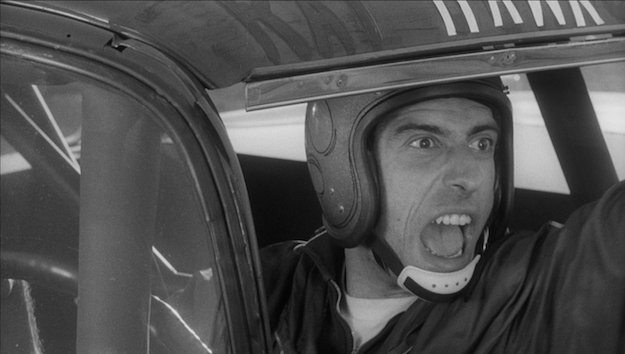 The origin story behind the 1969 film Pit Stop -- which is oft repeated by different participants in the bonus features of Arrow Video's new, remastered Blu-ray of the film -- is that producer Roger Corman wanted director Jack Hill to make a stock car racing movie for something like $35,000 as a quick cash-grab since the sport was so popular with the kind of folks who go to drive-in movies. Hill didn't want to make it, and wanted to make an art film instead. Corman didn't think these ideas had to be mutually exclusive; as long as there were some exciting racing scenes, Corman figured Hill could do pretty much what he wanted with the story. Hill agreed. The finished product ended up being just as idiosyncratic as Hill's horror comedy Spider Baby (which also just got the cleaned-up reissue treatment from Arrow), but in a way that is far more downbeat and nihilistic.

Dick Davalos stars as Rick Bowman, a racer with ambition. When we first see Rick, he's drag racing for ownership of his competitor's car. Unfortunately, his competitor spins out and crashes into a nearby house, and the cops nab Rick when he tries to flee the scene. Brian Donlevy (The Great McGinty) appears as Grant Willard, a mildly unscrupulous racing sponsor who bails Rick out of jail because he likes the young racer's moxie and thinks he might be bold and crazy enough to compete in Figure 8 racing. The Figure 8 track is exactly what it sounds like, with an intersection in the middle to create additional opportunities for crowd-pleasing collisions. At first, Rick is turned off to the idea, because it just looks like suicidal insanity. But then he meets the current king of the Figure 8, Hawk Sidney (Hill regular Sid Haig), a self-satisfied boor that Rick figures could use a good comeuppance.

The film then appears to follow a typical sports movie formula for a stretch. Rick makes multiple attempts to take Hawk down, but he's got more chutzpah than skill, so he trains to understand the art of Figure 8 racing. Soon, Rick gets good. He beats Hawk and he even starts going out with the girl that Hawk was hanging around, Jolene (Spider Baby's Beverly Washburn, appropriately adorable).

But this is also the moment when something starts to change narratively.

After perpetuating a beatdown on Rick and his car that is both violent and unsettling enough to be a scene in a horror film, Hawk begins to become a chastened, more understanding, and more likable guy. Sid Haig is best known for playing outlandish and grotesque characters, but Hill gives him a chance to not only ham it up or show Hawk's dark side but to expose the insecure, even sensitive core of the character. Haig's performance here shows that he's not just some journeyman hack but an incredibly talented and nuanced actor. He made me both hate and later respect his character with equal conviction.

Rick meanwhile turns into a single-minded sociopath who seeks greater glory. Rick appears to team up to help one of Willard's other sponsored drivers, Modified racer Ed McLeod (George Washburn), but he secretly plots to take over McLeod's coveted standing. He also sets his sights on McLeod's wife, Ellen (an already great Ellen Burstyn, credited as Ellen McRae). After all, if he's gonna take the big man's place, he might as well get all the perks. Dick Davalos effortlessly makes Rick's amorality bone-chilling by refusing to make a clear transition toward darkness. Rick is an ambitious outsider throughout, and success doesn't allow him to let go of the chip on his shoulder, it just gives him the leeway to indulge his own worst instincts.

Hill mentions in his interview on the Blu-ray that he initially wanted to make a racing movie in which the hero didn't win the big race. Corman put his foot down, and said that that couldn't happen. So instead, Hill decided to make a movie in which the hero wins the big race but loses his soul in the process. It's a heck of a conceit, especially for what would normally just be a movie where the story is filler the audience must tolerate until the next scene of cars crashing. Pit Stop (or The Winner, which is the bleakly ironic title that appears on the print from which this Blu-ray was made) is almost precisely the opposite of that. Hill brilliantly realizes the dramatic scenes, while the races get to be a bit repetitive and overlong. Custom car enthusiasts might disagree with me -- and I must admit, I loved a long, fairly unmotivated sequence involving a bunch of dune buggies cutting loose over a series of sand dunes -- but the film's strength is in its actors and not so much in its subject matter. For that reason alone, viewers who wouldn't go near a racetrack should give this odd little film a chance. 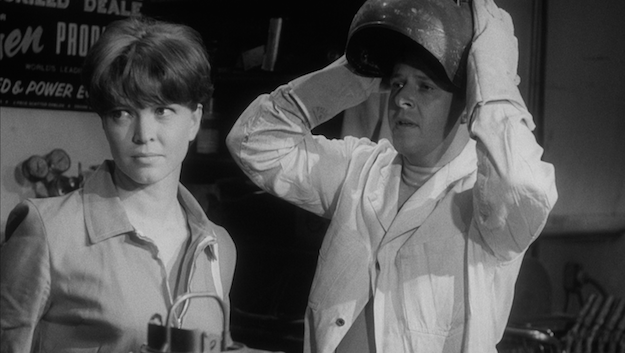 The Blu-ray
Pit Stop comes in a 2-disc Blu-ray/DVD combo. Both discs contain the same bonus material. The Blu-ray can be played in Regions A & B, the DVD will work in Regions 1 & 2. It comes packaged with an attractive booklet that includes an essay on the film by critic Glenn Kenny and a short history of the blues rock band The Daily Flash, which provides the film's memorable score. Reversible cover artwork that highlights the original poster design is also included.

The Video:
According to the restoration featurette on this disc (see below), the AVC-encoded 1080p 1.78:1 presentation was created from a combination of the film negative and Jack Hill's personal answer print. Most of the video rivals the excellent restoration that Arrow did for Spider Baby, with excellent detail, expressive contrast, and nuanced grayscale. However, the film materials for Pit Stop appear to have more innate flaws than the prior film. Certain shots are out-of-focus. Certain shots are over- or under-exposed. There are scratches and small bits of dirt and damage that Arrow have not completely eliminated, to avoid giving the film a plastic, overscrubbed look. It's less of an overall stunner than Spider Baby, but it's still a beautiful upgrade.

The Audio:
One of the most striking elements of Pit Stop is its blues rock score, and the LPCM mono audio handles the music beautifully. It's loud and driving and powerful, with a particularly strong bass response. The race sequences, with their vrooming engines, squealing tires, and crunching metal, all sound good too. The dialogue also fares better here than in Spider Baby, with no notable muffling or distortion. There is one subtitle option: English (British) SDH.

- A new commentary track, in which Waddell basically interviews Hill, both about this film and about his entire career. Hill often seems a bit baffled by Waddell's intense analysis of his work, but Hill manages to get beyond his own humbleness to offer some good tidbits about the productions and his more general thoughts on filmmaking.

Final Thoughts:
Director Jack Hill may be best known for his popular exploitation films with Pam Grier, but this lesser-known movie from earlier in his career shows that Hill is more than just a skilled low-budget craftsman. He's also an offbeat artist with a personality steeped in both sensitivity and cynicism. Arrow's Blu-ray isn't able to smooth all of Pit Stop's rough edges, but it's a great restoration nonetheless. Highly Recommended. 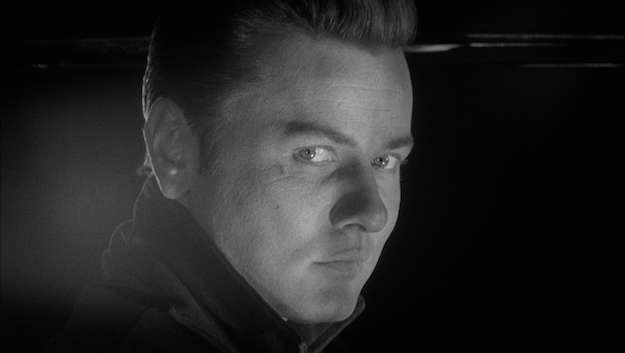