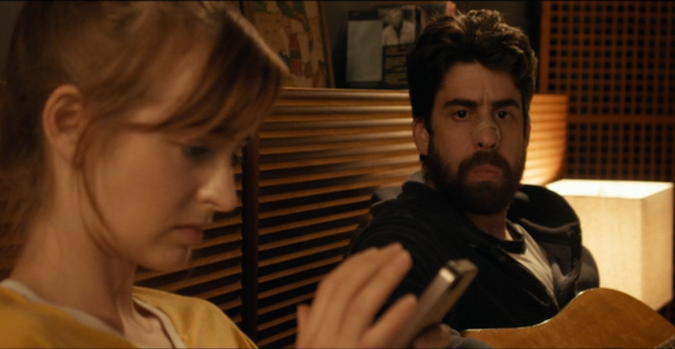 No Way Jose is a narratively aimless but consistently funny midlife crisis comedy from actor, director, co-writer, co-producer, editor, and songwriter Adam Goldberg (the dude from Dazed and Confused, not the creator of TV's The Goldbergs). It concerns emotionally arrested Jose Stern, lead singer of a band called Jose and the Borges (you know, like the author?), which is a pun (kinda, not really) that certainly goes over the heads of the band's new audience: kids at birthday parties. The nearly 40-year-old Jose does not tailor his material for the kids, but it doesn't matter because no one's really listening anyway. Meanwhile, Jose has a supportive fiancee named Dusty (Ahna O'Reilly, As I Lay Dying) who indulges his clearly moribund music career.

Everything seems to be puttering along just fine until Dusty receives an email offering her the ability to download an app that will show her registered sex offenders in their area. From the way Jose's eyes widen and he tries to stop her from completing the download, it becomes apparent that there's a story there. In the end, it turns out there was a youthful indiscretion that put a giant black mark on Jose's legal record, or rather Joseph Stern's legal record. Needless to say, Jose never mentioned this to Dusty before, and he claimed that he changed his name to Jose at a time when he discovered that he was one-eighth Mexican. This betrayal of trust forces Dusty to kick Jose out.

The rest of the film enters pretty typical breakup comedy territory, with Jose re-connecting with old friends (played by Dummy auteur Greg Pritikin and Cheap Thrills' Pat Healy), who have their own hang-ups and emotional blind spots, and also re-connecting with an old girlfriend (Community's Gillian Jacobs) who is having trouble keeping her life together. He sleeps on a couch belonging to Gabe and Kate (real-life couple Eric Siegel and Anna Belknap), who are married with children. Jose can stay for only two weeks, because after that point, he would have to register their address as his residence. Gabe and Kate clearly love each other, but they also chafe at their responsibilities (like taking care of two relatively insane children), thus illustrating the bad news/good news aspects of Jose's newly single status.

Rather than send Jose on a concrete quest to put his life together, Goldberg and his co-writer Sarah Kate Levy construct a number of small episodes frequently based around awkward situations, like when Jose has to ask his Youtube-famous half-sister (Emily Osment) for a loan to fix his car or when he takes Ambien and calls an escort service in search of a black Swedish prostitute. The film is not always as shticky as that; it mostly gives off a Woody Allen-meets-mumblecore vibe, as its humorously neurotic characters hang out and talk about... whatever.

The film's slack structure will no doubt be a turn-off for certain viewers immediately, but there's a warmth and believability to the characters and situations that Goldberg and Co. have created that makes No Way Jose's meanderings more interesting than tedious. The film's soundtrack, which includes Harry Nilsson's best song (can you guess which one I mean?), Three Dog Night, MC5, Claudine Longet, and a deep cut Beach Boys tune, also offers plenty of reasons to smile.

The Video:
Lots of rich, saturated colors in this widescreen 2.40:1 presentation, with strong blacks and pretty good shadow detail. Fine detail is a little soft, even for SD, and some of the wide shots get a bit noisy and artifact-y, but it's an above average transfer overall.

Special Features:
All of the bonus features, including the commentary, come with optional English, Spanish, Korean, Traditional Chinese, and Thai subtitles.

Final Thoughts:
Midlife crises and bad breakups have both been covered pretty thoroughly in the movies at this point, but No Way Jose tackles these topics in a way that is fresh, funny, and more than a little odd. Recommended.