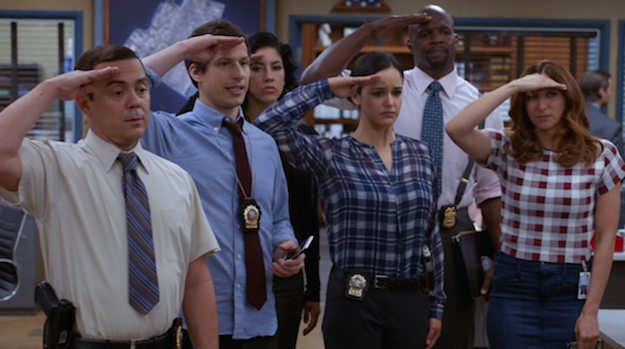 Brooklyn Nine-Nine was already a great sitcom when it debuted in 2013. It garnered tons of praise and even won a Golden Globe for Best TV Comedy before the season was even halfway complete. Coming from creators Michael Schur and Dan Goor, who worked on The Office and Parks and Recreation, Brooklyn Nine-Nine build from the workplace comedy template these guys have utilized so well for the past decade or so. Except now with cops.

The second season, now available on DVD, upholds this standard of excellence and -- though all fans might not agree -- the show has arguably improved this year. This is thanks to the seemingly effortless chemistry of the cast and the deepening emotional connections between characters.

Andy Samberg continues to shine as cocky goofball Jake Peralta, whose immaturity is offset by the fact that he is an effective and dedicated detective. Andre Braugher is a sustained revelation as Peralta's boss, the stoic-verging-on-robotic Captain Holt, who acts as a comic prime mover as often as he is the straight man/sounding board for the more outrageous antics in the office. Melissa Fumero becomes more crush-worthy by the minute, as the overgrown teacher's pet Amy Santiago who is more straitlaced than Peralta but isn't so square that she's oblivious, constantly matching him joke for joke.

The continued romantic attraction between Peralta and Santiago (i.e., the will they?/won't they? Jim and Pam relationship for this series) ebbs and flows, in turns that are appropriately frustrating and satisfying, but theirs isn't the only romance that touches the squad this season. A misbegotten series of sexual encounters between overenthusiastic foodie Boyle (Joe Lo Truglio) and self-involved wannabe dancer Gina (Chelsea Peretti) accidentally leads to a serious courtship between their single parents (played by welcome guest stars Sandra Bernhard and Stephen Root). Stone-faced tough chick Diaz (Stephanie Beatriz) starts dating Holt's hot nephew Marcus (Nick Cannon), and is then faced with the twin difficulties of having her personal life intertwined with her boss's and of admitting that she has the capacity to possess mushy feelings for a dude. There are even a few satisfying grace notes sprinkled throughout about Holt's loving relationship with his husband Kevin (Marc Evan Jackson).

The show is not strictly serialized, but it offers a few interesting ongoing story threads in this season. Holt frequently finds his mettle tested by a new superior, Madeline Wuntch (a perfectly witchy Kyra Sedgwick), who is a former colleague turned bitter nemesis. Sergeant Terry Jeffords (Terry Crews) wrestles with the responsibilities of fatherhood, including deciding whether or not he should get his tube tied. Eva Longoria appears in several episodes as a solid romantic partner for Peralta, whose only major flaw (besides not being Amy Santiago) is that she is... well... a defense attorney (gasp!). And, as for those simple-minded old-timers Scully and Hitchcock (Joel McKinnon Miller and Dirk Blocker)... um... I think they actually solve a case at one point.

An impressive array of guest stars from all corners of the comedy world also pop up this season. Craig Robinson returns as the elusive bandit/snitch Doug Judy, while fellow Office alum Ed Helms shows up as a self-important postal service investigator. New Year's Eve auteur Garry Marshall appears as an octogenarian bank robber who cons most of the squad into thinking he's just a sweet senile old man. Comedy Bang Bang favorites Nick Kroll and Seth Morris show up as jerky federal agents whose simulated hostage situation is derailed by the gung ho 99th precinct cops. Chris Parnell plays a coked-up attorney who less than fortuitously becomes the bane of Peralta's existence. Bradley Whitford shows up as Peralta's deadbeat dad. There are even cameos from Reno 911's Cedric Yarbrough and new Ghostbusters screenwriter Katie Dippold.

Brooklyn Nine-Nine has the relentless pacing of a screwball comedy on speed, complimented by a Family Guy-style penchant for cutaway gags. As such, its first season felt slightly unfocused and, let's admit it, excessively silly. This second season does a better job of striking the balance between keeping the gags coming at breakneck speed and not losing track of the characters who are delivering those jokes. Some late-season story developments offer promising new wrinkles for the coming year, but the show has already found such a nice sweet spot that one hopes they don't mess too intensely with success. 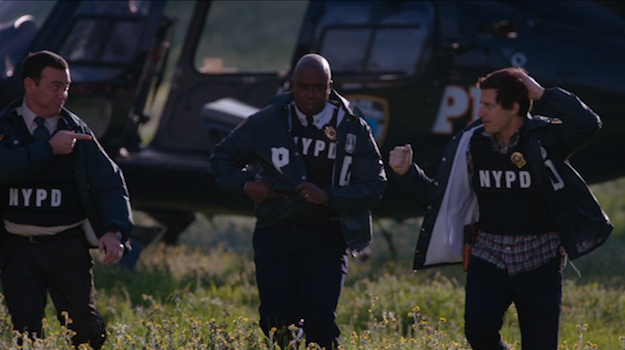 The DVD
The 23 episodes of Brooklyn Nine-Nine: Season Two are presented on 3 DVDs, housed within a standard-sized keepcase.

The Video:
It's hard not to sound like a broken record, but it's a bummer that Universal isn't offering Blu-ray for this title (comedies don't require HD? then why did you release Animal House and The Blues Brothers [among many others] in the format). At least we get pressed discs, unlike what happened to Louie after the first two seasons. The widescreen 1.78:1 image is unsurprisingly solid for a brand-new show. It's a little soft and not as clear as the HD broadcast version (obviously), but it's free from other compression issues.

The Audio:
The Dolby 5.1 surround soundtrack gets the job done. It's a sitcom, so it's mostly talk, but Dan Maracco's music sounds impressive in the surrounds, and there's discernible ambient sound design otherwise. One subtitle option: English SDH.

Special Features:
Just a paltry collection of Deleted Scenes, spread across the 3 discs and totalling... a little more than 90 seconds. REALLY? Boo.

Final Thoughts:
The cast of Brooklyn Nine-Nine is possibly the best comedy ensemble currently assembled on TV. Their unforced chemistry, verbal dexterity, and palpable humanity turns the dicey proposition of a comedy set within a homicide squad into a consistent sure thing. Highly Recommended. 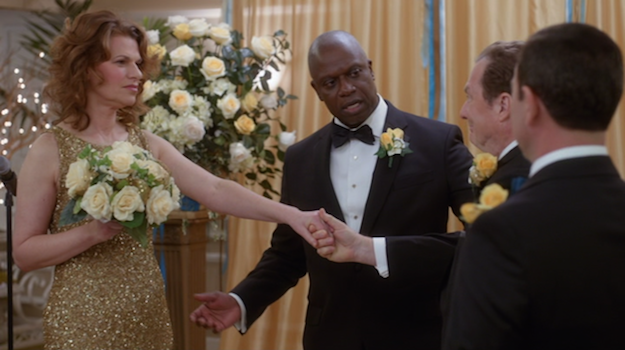