Raro Video // Unrated // June 2, 2015
List Price: $29.95 [Buy now and save at Amazon]
Review by Stuart Galbraith IV | posted June 22, 2015 | E-mail the Author
Killer Cop (1975), an Italian poliziottesco (police thriller, often with a political subtext), is fairly good for its type, despite a meandering script and some sloppily directed action here and there.

The plot is based on the 1969 Piazza Fontana terrorist bombing in Milan, which killed 17 and wounded 88. As in Killer Cop, the attack was initially blamed on anarchists, including one suspect, Giuseppe Pinelli, who died in police custody after jumping, falling or, most likely, being pushed out of a fourth-floor window. Neo-fascists affiliated with the far right Ordine Nuovo, rather than left-wing anarchists, were eventually charged but, incredibly, the case dragged on through three trials lasting until 2005. Key defendants were acquitted for lack of evidence. One now resides in Japan under a Japanese name.

For non-Italians, the movie is still fairly gripping and has many plusses, including a late-career co-lead performance by American actor Arthur Kennedy, and an excellent score by Stelvio Cipriani.

The film was released in Italy as La polizia ha le mani legate ("The Police Have Their Hands Tied"), altered slightly but critically in the wrong direction to The Police Can't Move, suggesting a very dull film indeed. Killer Cop isn't much better, implying as it does an entirely different kind of thriller. 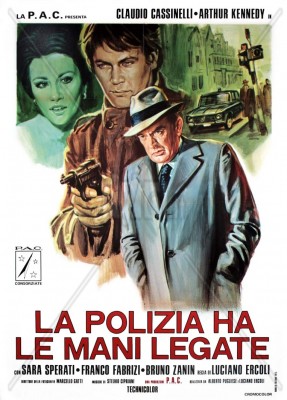 The film's main star is Claudio Cassinelli, who died tragically at 46 in a helicopter crash while filming a Sergio Martino picture in 1985. In Killer Cop Cassinelli plays Police Inspector Matteo Rolandi, who is searching the hotel room of an Algerian drug trafficking suspect when a terrorist's bomb explodes in the lobby below, killing 12 and injuring 27, mostly foreign dignitaries.

Rolandi's ne'er-do-well, older partner, womanizing Det. Luigi (Franco Frabrizi of I vitelloni and Death in Venice), accidentally spots the bomber, drug addict Franco Ludovisi (Bruno Zanin, Amacord), leaving a note in a phone booth claiming it was all an accident. Luigi gives chase, but panicky Franco pulls a gun on the detective, who stupidly left his in Rolandi's glove box. Franco, desperate for a fix, makes his way back to the apartment of co-conspirators Falena (Varleria D'Obici) and Rocco (Paolo Poiret).

Meanwhile, Milano politicians, under international pressure, unsuccessfully try to persuade Attorney General Di Federico (Arthur Kennedy) to wrap things up quickly. But "Minty," as he's called (after his copious consumption of breath mints) will not be rushed, and insists that every aspect of the investigation be above board.

Rolandi, for reasons not entirely clear, secretly works his own, parallel investigation, following leads involving a pair of eyeglasses found at the crime scene, and later he grills girlfriend Papaya Girotti (Sara Sperati), whose work with drug addicts might lead him to Franco. In a clumsy, obvious bit of symbolism, he's always carrying around a copy of Melville's Moby Dick.

For Italian audiences, and despite a big disclaimer at the beginning claiming the story is entirely fictitious (these turn up in lots of ‘70s Italian and Japanese crime films), there's no question Killer Cop is based on the Piazza Fontana bombing. The movie even utilizes news footage of real bombing victims' funerals. Because the case dragged on into the next century, the movie never explicitly identifies the masterminds, though strongly hints at rich Ordine Nuovo-types who have the additional leverage of corrupt government officials in their pockets.

The script, primarily by Violent City's Gianfranco Galligarich, begs numerous questions, such as why Rolandi works his own investigation to the point where the detective nearly becomes a chief suspect himself. His antagonistic relationship with Di Federico, himself beset with bugging devices in his office and other problems undermining the investigation, doesn't make much sense, unless there existed an inherent distrust among Milano detectives toward their high-ranking superiors.

The movie is generally well made, though the bombing itself is sloppily handled. The explosion is little more than a magician's puff of white smoke, and more than one of the lifeless corpses blinks. Conversely, Stelvio Cipriani's score is excellent, to my untrained musical ears resembling some of Ennio Morricone's ‘70s film music to the point where I initially thought it was his work.

Very un-Italian Arthur Kennedy is memorable as the Italian Attorney General, and he dubs his own voice on the English version. Reportedly, Major League Hollywood star Jack Lemmon narrated an English-dubbed version of the film but, if so, this cut wasn't it. This Raro Video release runs 97 minutes and includes a couple of short scenes in Italian presented with English subtitles.

Presented in a new high-def transfer from the original Techniscope camera negative, the 2.35:1 widescreen Killer Cop generally looks strong on Blu-ray. The music for the opening titles seems to be full stereo, though the rest of the Linear PCM 2.0 track sounds monophonic to me. The film is available in both its original Italian with optional English subtitles, or in its English-dubbed version with a couple of short scenes in Italian only with English subtitles.

Supplements include a booklet essay by an unidentified author and a 20-minute interview with production designer Alessandro Calosci.

An intriguing little movie that fans of Italian crime films and political thrillers should find irresistible, Killer Cop is Recommended.