Gett: The Trial of Viviane Amsalem

In our Western society, we'd like to think that the planet as a whole made considerable advancements in gender equality. Unfortunately, in high patriarchal societies governed primarily by religion, women still have next to zero rights when it comes to making decision concerning their own lives as individuals. The immensely captivating and rightfully infuriating courtroom drama Gett: The Trial of Viviane Amsalem depicts such vast inequality and lack of respect for an individual with a unique storytelling approach and brutal honesty. 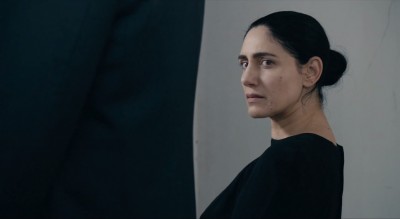 Before we get to the important and always relevant cultural themes of the story, I want to first give praise to brother and sister writing/directing team Ronit and Shlomi Elkabetz for reminding us once again how much strong writing and performances can drive a film. Gett takes place almost entirely in a courtroom with extremely minimal production design that consists of a bunch of cheap tables and chairs, generic white blinds on the windows, and a computer so old that it might have trouble running Netscape.

That's about it as far as the art direction is concerned. Even 12 Angry Men added a fan to the set for some background movement. I wouldn't be surprised if you told me the whole thing was shot in one of the directors' living rooms. To be fair, there are some brief scenes where the production moves all the way out to, gasp, the waiting room. Otherwise we're stuck in a depressive Orthodox Jewish courtroom.

I recently reviewed A Master Builder, Wallace Shawn and Andre Gregory's third foray into minimalist theatrical filmmaking, and that film utilized very meager production design and contemporary casual costumes to bring together a dense 19th century play. In A Master Builder, the visual choice was a stylistic one, trying to get the audience to relate to a period piece through the writing and performances alone.

In Gett, this approach is used to strip the film off of any stylistic approach. The courtroom is depicted in the most realistic fashion possible, where we believe that such a hardened religious organization would put together such a lifeless environment. It also forces the audience to focus entirely on the writing and the performances. That's quite a gamble, which pays off tremendously thanks to the heartfelt and angry writing, perfectly paced editing, as well as the exquisitely layered and passionate performances.

Gett tells the story of Viviane Amsalem (Co-writer/director Ronit Elkabetz), an Orthodox Jewish woman struggling to earn his divorce from Elisha (Simon Abkarian), and the years-long trial overseen by the Orthodox court that turns a simple decision into a logistical nightmare. I use the word "earn" instead of "finalize" because in Orthodox tradition, the woman doesn't have nearly any rights regarding divorce, including whether or not she can choose to get one. It would be a clear cut case if Elisha agreed to the divorce, but through sheer stubbornness that gradually turns into a form of casual sadism, he refuses to grant Viviane her wish, even though pretty much everyone who knows them agrees that the couple is miserable when they're together.

Thus begins a convoluted look into the couple's lives through testimonies from their friends and family. The Elkabetz siblings borrow a lot from Rashomon and The Passion of Joan of Arc in the way they set up their static long shots and close-ups from the points-of-view of the judges in order to let the power of the performances play out uninterrupted. It's during these testimonies where the film veers into absurdist comedy territory, full of humor that emerges organically thanks to the mind-boggling hypocrisy on display. Almost everyone involved with the case admit that Viviane's life will be mental torture as long as she stays married, but thinks she should be forced to remain married because Elisha never beat her or cheated on her and is a good member of the congregation.

As an actress, Ronit Elkabetz puts herself in a very delicate position where she has to carry the emotional weight of the piece through a mostly silent performance. As a smart woman in such a patriarchal society, her character knows that speaking out against the grave injustice will immediately result in the judges throwing the case out. So, apart from an emotionally charged speech during the third act, she bides her time and tries to keep calm and patient while a group of men decide her fate. It's during these scenes, as the pain and suffering becomes clearly visible behind her eyes, where she shines as a performer. 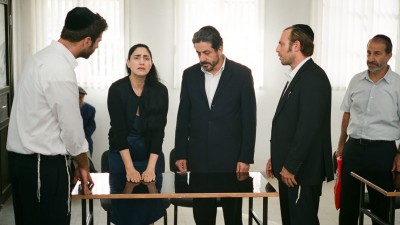 As I mentioned above, Gett rightfully takes place almost entirely in a bland white room with characters predictably dressed in as much of a monochromatic style as possible. That being said, the assured camerawork and lighting of the piece results in a clean and crisp 1080 presentation that's cinematically pleasing to look at. Not since the Blu-ray release of THX 1138 have I seen such a clean use of white space in the frame.

Gett comes with two audio options, DTS-HD 5.1 and 2.0. This is a film that's almost entirely comprised of dialogue, with minimal sound effects and almost no musical score. The opening and end credits, as well as a long take that focuses on the protagonist's weary face, are the only sections that contain some music, which can be briefly heard through the surround speakers. Otherwise, the mix on both options might as well be mono. That being said, the dialogue is mixed and transferred very clearly and has a considerable amount of depth.

The Making of Gett: This is a 30-plus-minute fly on the wall look at the film's production.

The Cinema of Gett: Co-writer/director Shlomi Elkabetz talks about directing the film during this 20-minute interview. This is the most informative extra on the disc.

2015 Golden Globes Symposium: A Q&A that took place in LA in 2014. Interesting, but just like many festival or awards Q&As, it's hard to follow thanks to poor in-camera audio.

PRX Behind The Scenes: This is a 30-minute radio interview with the directors. If you watch the previous two interviews, skip this one.

Even though it takes place in a single, very uninteresting-looking location, Gett is more captivating, engaging and thrilling than most $200 million blockbusters out there. The film's climax, which simply involves a piece of paper changing hands, has more genuine tension than any thriller I've seen in a long time. All of these prove that with an interesting story, as well as considerable passion and talent, filmmakers can still construct a near-masterpiece in such a meager setting.