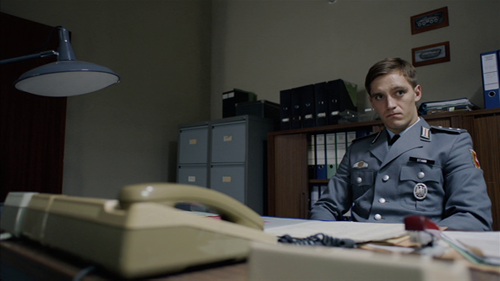 Escalating Cold War-era tensions in Europe play a huge role in Deutschland 83, an acclaimed 8-part television co-production from the Sundance Channel, Freemantle Media, and Germany's RTF (the series is mostly spoken in German). All eight hours of this absorbing, '80s-evocative drama are included on Kino Lorber's three-disc DVD set, along with a few extras to tempt fans who enjoyed the Sundance airings over this past summer.

The grippingly done Deutschland 83 operates on a patently ridiculous premise - that a wet-behind-the-ears boy from East Germany would be drafted to extract sensitive material from West German military officials. The resulting intrigue ends up making a lot of sense, however, given the heightened paranoia of the times (this was when President Reagan was railing against the Communist "evil empire"). The boy in question is Martin Rauch (Jonas Nay), a typical high school grad with a girlfriend. When confronted with the spying idea by his high-ranking GDR espionage agent aunt, Lenora (Maria Schrader), Martin is as resistant as anyone would be. He eventually goes along, however, on the promise that it will help his weakened mother (Lenora's sister) receive a life-saving kidney transplant. Martin's mission: under an assumed name, he must take the place of a fallen West German soldier hired as the new aide-de-camp for General Wolfgang Edel (Ulrich Noethen). Since the General often hosts visiting military officials from the U.S. and elsewhere, Martin's close proximity offers Lenora and her GDR cohorts plenty of opportunities to eavesdrop, bug and abscond with info that potentially could change the Cold War's course.

Deutschland 83 does a fantastic job of recreating the tensed-up atmosphere of Germany in the '80s, when a widespread sense of dread and paranoia manifested itself even in innocuous things like fashion and pop music (Nena's campy German-language World War III hit "99 Luftballons" figures prominently in the first episode). The series starts off with a bang, becoming progressively more absorbing as Martin's charade becomes a complex web of lies-upon-lies. As excellent as the production design and tense moods are, what makes it worth coming back to are the impressively rendered characters and their fraught, ever-shifting relations with each other. The Martin/Lenora dynamic starts off interestingly enough (he's an open book, she's cold and calculating), becoming more twisty as Martin (under the identity of Moritz Stamm) acquaints himself with General Edel and his family in Bonn, Germany. Martin's roommate in the soldiers' barracks is Edel's son, Alex (Ludwig Trepte), a pacifist who despises everything his dad stands for (and he's gay!). He also becomes romantically involved with the Edels' daughter, Yvonne (Lisa Tomaschewsky), who has joined a cult-like peacenik group against the wishes of Dad and Mom (Anna von Berg). Meanwhile, back in Martin's homeland, Lenora has enlisted Martin's lovely girlfriend Annett (Sonja Gerhardt) to care for the mother, Ingrid (Carina N. Wiese), until she can get her kidney transplant. Though the story can get awfully Byzantine at times, each of the eight episodes is done with a spellbinding attention to detail. The plots mostly concentrate on international affairs, although they skillfully incorporate then-current events like the AIDS crisis and the incident where a Korean passenger plane got shot down by Soviet military aircraft.

Actor Jonas Nay's off-kilter, non-symmetrical facial expressions throughout Deutschland 83 pretty much sums up what it's all about - an eight-hour drama that delves into the split-apart Germany's tense, often ridiculous paranoia during the Cold War. My only complaint is that its just eight hours long - I want more! 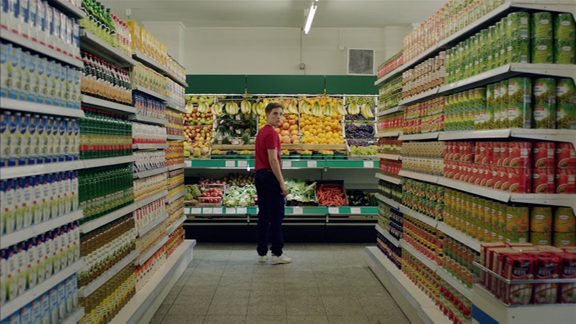 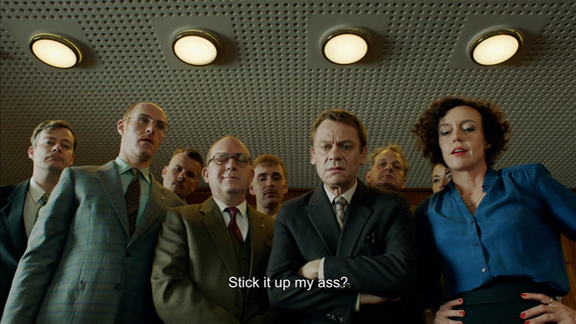 Kino Lorber's Deutschland 83 comes as a standard black single-width keep case package with two of the three discs mounted on a flimsy inside hinge. Aside from the bright exterior graphics, no supplementary printed material is provided.

The DVD edition preserves Deutschland 83's 1.78:1 broadcast image in a satisfactory manner, with good detail, pleasant color and rich textures. If the image sometimes looks bleached-out on the lighter side of the spectrum, it was likely an intentional decision on the producers' part. Although it's a German production, the digitally generated image has a sharp, professional sheen on par with current American TV dramas (actually, the show it most resembles visually is the French series Les Revenants).

The episodes sport a pleasantly clean soundtrack mixed in 5.1 Surround, keeping the dialogue track front and center while just occasionally using the left and right channels for atmosphere. Musical selections sound bright and full, strong on the bottom end without overpowering the dialogue track. The episodes also include the option of a 2.0 Stereo soundtrack. The burned-in English subtitles are nicely done, although the smaller-sized white font often loses its legibility against brighter backgrounds.

A few promotional featurettes, spoken in English, are included on the third disc. The Actors (11:49) and The Creators (13:19) have cast and crew speaking enthusiastically about the '80s, the show's conception and other topics. Things get more in-depth with Q & A with Cast and Creators at Goethe-Institut (21:55), filmed in New York following a screening of the first episode.

With tight editing, natural performances, and mood-setting devices such as vintage TV news broadcasts and MTV-era pop music, the first season of the Sundance drama Deutschland 83 ended up becoming a surprisingly great watch. In shorthand terms, I would describe it as a cross between Mad Men and the 2006 Cold War Paranoia masterpiece The Lives of Others. If that concept holds any appeal, by all means dive in - you'll be glad you did. Highly Recommended. 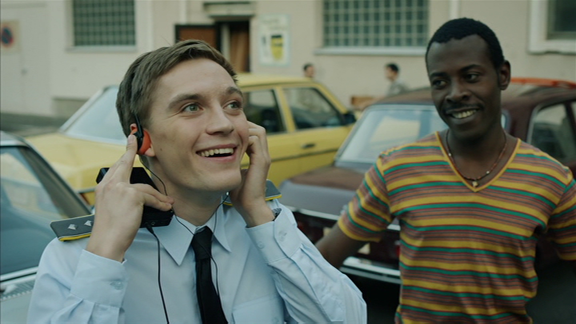 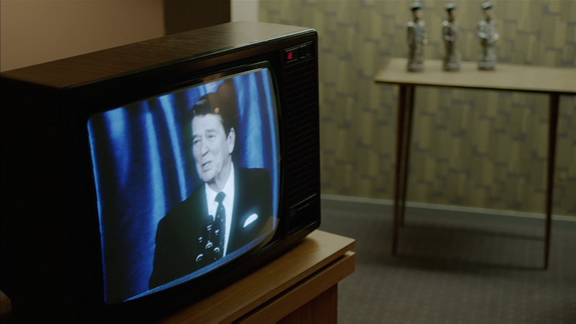