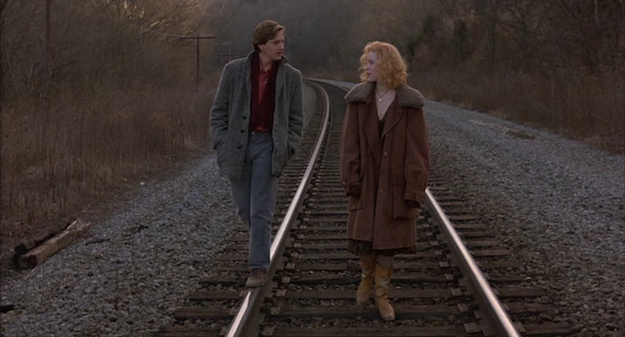 Both oddly old-fashioned and distinctly of its time, the 1988 class-conscious romantic drama Fresh Horses plays like something Tennessee Williams might have written for the Brat Pack had he lived and worked long enough. It's tempting to assume director David Anspaugh (Hoosiers, Rudy) is making a reference to Sydney Pollack's Tennessee Williams adaptation This Property is Condemned when Anspaugh has his film's central couple, a preppy boy who feels out of place and a low-class girl with a questionable reputation, chat and flirt while walking along a set of train tracks. Maybe I'm grasping here and, granted, the railroad business doesn't play a part in Fresh Horses like it does in the other film, but the metaphor about lovers from different "sides of the tracks" coming together is certainly present in both stories.

Bookish Ohio college student Matt Larkin (Andrew McCarthy) is on his way toward a boring, normal, upper middle class life. He's already engaged to marry a pretty but bland rich girl who has their future all mapped out. When Matt's buddy Tipton (Ben Stiller, feebly attempting to be the movie's Robery Downey, Jr. type) tells him about a 24-hour party house across the state line in Kentucky, Matt is resistant. Eventually, because the plot demands something new has to happen, Matt agrees to go with Tipton to visit this house one afternoon. What they find is not so much a party as the sleepy purgatory between parties, with a random redneck playing pool while others sit around sedately. Tipton is a contented tourist in this situation, while Matt remains unimpressed -- until he runs into Jewel (Molly Ringwald), a pretty young thing hanging out in the kitchen who takes his breath away.

As happens so often in the movies, but probably not as much in life, the college student dumps his rich fiancee and stops going to classes so he can hang out with this mysterious, supposedly trashy girl. But, before you can say "Act 2 complications," it turns out that Jewel might not be everything she is cracked up to be. Is it true that she's not twenty-years-old like she claims, but actually much younger? What about the rumor that she's already married to an abusive lout? Much of the second half of the film involves Matt wrestling with what he considers to be Jewel's problems, trying to "fix" her, a tactic which leads exactly where you expect it would.

There are plenty of interesting and engrossing passages in Fresh Horses, but the film never fully delivers on the promise of its script (written by Larry Ketron, adapting his own play). Some of the fault lies with Anspaugh's bland direction, but the miscasting of most of the major roles truly derails the intention of the piece. McCarthy, with his clean-cut boyish looks, sometimes meshes with his character, but he's too perpetually low-key to be convincing as a guy who would wreck his stable world just to pursue an unlikely romance. Ringwald is too glamorous and too nicely styled by the film's hairdresser and costumer to ever be confused for backwoods white trash, not even for a second. Now, I'm not saying she needed to have greasy hair and blackened teeth or something like that, but compare Ringwald's look in this film to Jennifer Lawrence in Winter's Bone and tell me which one looks like she grew up poor. Stiller, meanwhile, seems uncertain whether he's supposed to be playing a funny boor or an unfunny boor, so he usually ends up the latter by default.

Viggo Mortensen is one of the few actors who seems completely at home, in his relatively brief role as the redneck asshole who happens to be the other man in Jewel's life. Molly Hagan, whom viewers of a certain age might remember as one of the emotions inside Herman's Head on the '90s Fox sitcom of that title, is also quite good as a cynical rich girl who wouldn't mind picking Matt up off the rebound.

Clearly, this film got made because it promised a re-teaming of the girl and guy from Pretty in Pink. And probably Molly Ringwald and Andrew McCarthy were glad to have a piece of material that pushed them out of their comfort zones and slightly away from their established personas. Unfortunately, the finished product proves that just because both Ringwald and McCarthy are solid actors does not mean that they can disappear into any story. Fresh Horses is not an outright disaster, but it's hard not to imagine how much more satisfying a properly cast version of this film would have been. 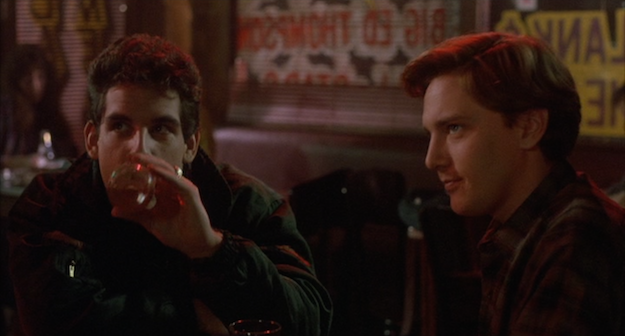 The DVD
Fresh Horses is back in print as a manufactured-on-demand (MOD) DVD-R through the Sony Choice Collection. The packaging does not feature the Sony Choice logo and resembles the original DVD packaging.

The Video:
The good news for any fans of Fresh Horses out there is that this appears to be the film's region 1 debut in its original aspect ratio as a widescreen 1.85:1 transfer. The bad news is that this is a pretty noisy presentation. It looked good on my laptop, but the compression was very apparent on my big screen. Colors are fairly drab, but that seems to be the intention. Black levels are strong, with decent shadow detail.

The Audio:
Nothing fancy, just a Dolby 2.0 stereo mix. Dialogue is clear, so is the frightfully dated music. No subtitles.

Special Features:
Just the signature Sony Choice auto-repeat that starts the film all over again without prompting.

Final Thoughts:
A so-so melodrama hampered by middle-of-the-road direction and unconvincing casting. There are effective moments scattered throughout, but not enough to garner a full recommendation. Rent It. 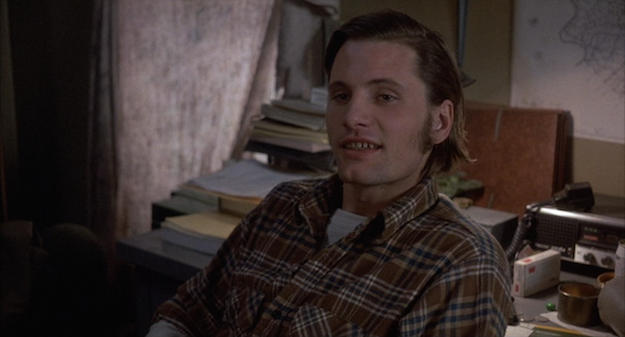