Lull in the Sea: Complete Collection (Premium Edition), A

A Lull in the Sea is a 2013 anime series which was produced by anime studio P.A. Works (Another, Angel Beats!). The series is set in a genre-bending sci-fi world in which people actually live inside of the ocean (as well as on the land above). There are sea-people who can breathe underwater and they live in homes under the sea, go to school, and worship a sea-god.

In the story, people once all lived in the ocean. The sea used to be the main home of everyone. Then humans split up and some went to live on the land while others stayed back underwater. There is an old prophecy that predicts the end of the world sometime in the distant future, so characters must hibernate to survive and pray to the sea god with a festival to try and save the people up above and to change the underwater conditions so that they can prosper once more.

The series is mainly about the family relationships, romances, and drama. Though it has a strong science fiction element, this is what is called a "slice-of-life" show. It basically is just a coming of age story about young people falling in love, some starting families, and their relationships. The show is generally heartwarming and is sweet-natured.

The animation is gorgeous on this series. There was a lot of great effort on the production. The background art is lush and colorful. The animation is sleek and modern looking. It is one of the best looking anime series I have seen all year in terms of artwork. The animators are really good at making this a nicely animated show.

The music on the show is a good match to the anime. The music is really laidback, calming, and is lovely sounding. The music has a lot of solo piano pieces but also uses some cool sounding electronic music in some of the more action-heavy scenes (especially at the conclusion). This music was wonderfully composed.

If the show has drawbacks, it's that the humor is hit-and-miss with some moments disappointing. The comedy was the weakest part. The show was much better when it focused on the characters. The human element was what impressed the most. A few storylines also could have been a little better but the conclusion was emotionally satisfying.

The direction is by Toshiya Shinohara (filmmaker of the entire InuYasha movie series). He makes the series have a high quality stylistic approach and helped the production feel high-quality (this is an example of a show that feels more like a movie). The filmmaking is top quality.

The screenplays for the show were written by Mari Okada (Anohana: The Flower We Saw That Day). While I disliked some of  the series humor, I loved Okada's emotional character-focused storytelling as it made the series have an immensely satisfying emotional core. The characters were at the heart of the story. I appreciate stories that focus more on the characters than on the action scenes.

Overall, while A Lull in the Sea was not a perfect series in every regard, it was still one of the better made ones released recently. The storytelling builds and gets better as it goes along. It creates an interesting world with the underwater sci-fi element. The characters are generally strong. The animation is wonderful. This is a anime that fans of quality slice-of-slice series should definitely see.

A Lull in the Sea arrives on Blu-ray from NIS America with a stunning presentation. The high definition release is remarkable with stellar compression. The encoding quality is excellent on this release. The colors are richly vivid throughout, line detail is superb, and contrast quality is great. The image looks beautiful to behold. Fans will certainly be satisfied with this presentation.

There are only a few fleeting moments of banding present on this HD release (and because these moments are so rare, it seems these may be source related issues). The 1.78:1 widescreen 1080p MPEG-4 AVC encoded release is impressive and marks another quality effort by NIS America.

Please Note: This release is Region A + B compatible and will play in both United States and United Kingdom players.

The lossless uncompressed PCM 2.0 stereo audio presentation provided is lush and crisp. The dialogue is always easy to understand and the subtitles are superb. NIS America provides the series with both the original Japanese audio (with English subtitles) or in English dubbed.

Viewers who select the English dub can watch with either partial subs or no-subs. 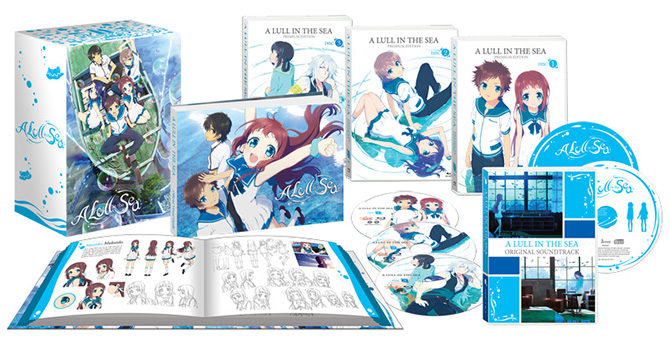 The set is packaged in deluxe collector's packaging with a gorgeously designed art-box housing the entire collection. It even features a well-designed glittery texture on part of the packaging. This release includes three volume releases with all of the episodes across the set.

The release comes with CD's of both of the original soundtracks for the series (with the lush music score and the opening/ending theme music). There is also an included artbook which features a character guide, episode guide, commentary from production staff, sketch artwork, color images, and more.

On disc supplements include clean opening/ending credits (songs) featured throughout the series, original Japanese trailers created for A Lull in the Sea and trailers promoting other NIS America releases.

A Lull in the Sea is a unique anime series which combines an intriguing sci-fi premise with a slice-of-life style of storytelling that explores the character's stories as a coming-of-age tale focused upon family, friendships, romance, and drama. It's more about the characters and relationships than action or adventure. Fans of this type of anime series should definitely consider checking out A Lull in the Sea.

NIS America's Blu-ray release is exceptional with high-quality PQ and AQ and amazing packaging and bonus pack-in items (including the original soundtracks and an art-book).