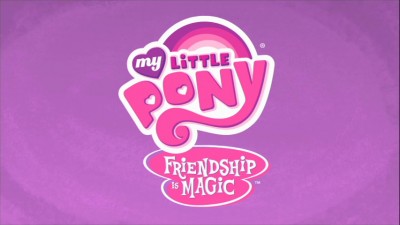 
The Story So Far...
Led by Lauren Faust (The Powerpuff Girls, Foster's Home for Imaginary Friends), Hasbro brought their old girl-toy tie-in cartoon back as a centerpiece of their HUB cable channel. Trying to make a better, more universal product than the original, Faust wound up creating a show that not only appeals to young girls, but to adults who have embraced the series and adopted the labels of "bronies" and "pegasisters." The series is currently in its fifth season, and several home-video collections have been released. DVDTalk has reviews of several of the DVDs.

"The Show Stoppers"
The Cutie Mark Crusaders are trying to get their cutie marks by doing different thing like… Feeding pigs, Making different treats and sweets, Dying hair, Mind reading, Mountain climbing, Scuba diving and even being a librarian! After trying all of that, their teacher Miss Cheerilee gives them a flyer for the school talent show! They get all sorts of props like a fan, fabrics, planks and plywood, paint and brushes too! Things don't always go as planned… Watch the movie to find out what happens next! I thought the episode was okay. It wasn't exciting.

" The Return of Harmony Part 1 and 2"
It all started with a normal field trip. When they stop at the Discord statue, something bad happens… Cotton candy clouds that rains chocolate milk? Flying pigs? Long leged bunnies? What could be worse? Elements go MISSING! Who could have stole them? Where could they be? They find out that Discord stole the Elements Of Harmony! Discord tells the Princess and the Mane 6 a riddle to try to find the Elements Of Harmony. "Twists and turns are my master plan find the Elements back where you began." They go to the maze. Discord took their wings and horns. They get separated and plan to meet in the center of the maze. But when Discord tricks them, they to not be what their Element is. ex. honesty, laughter. Only one is not tricked… When they are tricked they turn gray or light gray. I never knew balloons, apples, butterflies, clouds, and diamonds could be so evil!

They all start fighting and being rude. The last pony finds out where the Elements are… Then a chocolate milk storm comes. It's day one second, then it's night and soap roads another. Ponyville is going to be Chaos Capital of the world. When they get to Twilight's library the ponies become even more gray! Then the play keep away with Twilight's book. They have The Liar, The Brute, The Grump, and The Hoarder. That about covers it. Now Spike has to be the new Rainbow Dash. I forgot about Tom the rock. The ponies leave Twilight. Now Twilight turns gray like the others… It's up to Twilight to save the day... I thought theses episodes were REALLY funny!!! 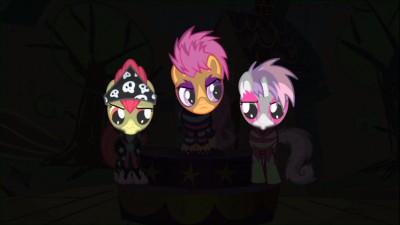 " The Cutie Map Part 1 and 2 "
In Princess Twilight Sparkle's castle something special is about to happen… When they all sit in their chairs a map appears out of nowhere! Their cutie marks all go to a place on the map. So, they go on a field/road trip. When they get there, Pinkie hides under rocks to make sure the coast is clear. All of the ponies' smiles are really weird (according to Pinkie.) Twilight also notices that all the cutie marks are the same. This is the cutie mark: = . Party Favor and Double Diamond greet the ponies. Starlight the founder greets the ponies too. They don't have any special talent. Then they sing a song to the ponies called "In our town"[Part 1 9:00-11:23] It explains how wonderful their town is. They don't want to give up their cutie mark. Double Diamond helps them with their stay. Everyone is staring at them. The waiter over hears them fighting and asks them questions. Then they get muffins and they ask Pinkie to eat the so they could "get" more muffins. 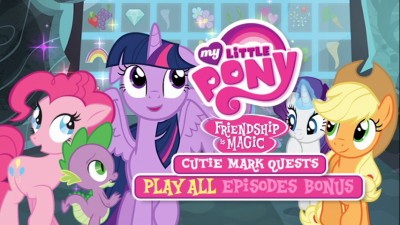 The DVD
Packaged in a white single-width keepcase, which is inside a slipcover that repeats the cover art, this DVD offers up five episodes. The disc has an animated, anamorphic widescreen menu, with options to play all the episodes, select shows and check out the extras. There are no audio options and no subtitles, though closed captioning is included.

The Quality
As with other My Little Pony DVDs, these episodes look fantastic and really do deserve a Blu-ray release to let the gorgeous colors really shine. Everything looks sharp and clean, with no concerns about compression or other problems. This is eye-candy plain and simple, which may result in you focusing on the colored outlines of the ponies since they are just so vivid.

Like other recent MLP DVDs , this one boasts Dolby Digital 5.1 tracks, and they continue to be impressive, particularly during the songs, which feature solid separations in the center and surround channels, which make for a fun listen. Overall, the audio is clean and clear, with strong dialogue and sufficient bass, which sound effects and music cross across quite well.

The Extras
The only bonus content on the disc takes the form of a sing-along of the song "In our Town" [9:00-11:23]. There's karaoke on the screen. I didn't really like the song because it was not that exciting. 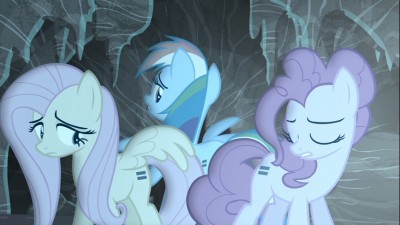 The Bottom Line
I thought the whole disc was amazing. I think 4-10 year olds maybe 9, should watch this. My personal favorite episodes had to be "Cutie Map" and "Return of Harmony" because they were exciting and funny. Hope you like my review on Cutie Mark Quests. Make sure to look for my next review and read my old ones too! Bye! :)