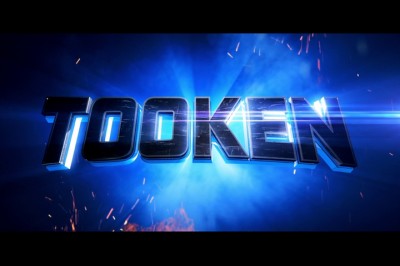 
The Movie
When I first came across Tooken, I made the very acceptable assumption that it was yet another entry in the Jason Friedberg/Aaron Seltzer canon, after a few years of quiet from the spoof-makers, which followed a pair of mostly-ignored efforts in The Starving Games and Vampires Suck. However, they have nothing to do with this one (instead releasing their own version, the terribly-titled Who the F#@K Took My Daughter?, later this year--one of TWO spoofs they are putting out in 2015.) Rather, Tooken is the work of John Asher, who, besides directing several episodes of One Tree Hill, was behind the camera for the star-studded Miramax flop Diamonds, where he worked with his future (and now one-time) wife Jenny McCarthy.

Asher takes the spoof concept more seriously than those other two chuckleheads, taking the general idea of Liam Neeson's Taken franchise, namely a former special agent having to deal with his family getting "taken", and trying to tell a silly story in that world. It hews far closer to the tradition of The Naked Gun than a film like Meet the Spartans, with Lee Tergesen playing the mostly straight-faced Leslie Nielsen part, standing in for Neeson. Bryan is a former special agent now working as a security guard, struggling with his ex-wife's new dating life and his college-aged daughter's blossoming sexuality. His main personality attribute is his extreme intensity, which consistently works against him (to what was supposed to be hilarious effect.) 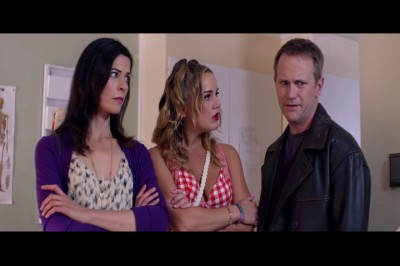 The film sets up a conflict with a gang of Albanians (like Taken) but the big baddie is a scatalogically-monikered Bond knock-off named Brownfinger, played with villainous gusto by Margaret Cho. Despite her presence, the film's real focus is on Bryan's inability to cope with how his ex-wife has hooked up with a former porn star named Big Chocolate (Reno Wilson) and how his hot-to-trot daughter (Laura Leigh) is dying to have sex with her boyfriend (co-writer Cameron Van Hoy.) Wilson is probably the funniest part of the movie, as they play his gangsta character against type, making him a kale-obsessed vegan, while abusing him at every opportunity. The least funny? Bryan's filthy-mouthed mother (Joyce Bulifant) who is simply the dirty grandma, with no real redeeming factors (one of her only moments of involvement with the plot is really rather meaningless and devoid of laughs.) The lack of laughs is universal though, as the general sense of humor is broad and telegraphed from a mile away. A girl is standing in front of a door talking about her new nose job? Whatever could happen next?

After watching this film, whose only real sin is a bevy of lame, utterly-simple jokes, including a running erection gag that pays off in the most ridiculous way possible, one is left with plenty of questions. Why is Cho, by all accepted standards a woman (one must be careful these days), playing a man, when gender is hardly a component of the character? Why are McCarthy and her current husband Donnie Wahlberg is her ex-husband's film less time than I might be (I'll need to check again.) Why are Ethan Suplee and Lukas Haas in this film at all, considering the minor parts they play? Why are the Albanians subtitled in not-English without any evidence of a joke? What the hell is happening in the season featuring African comedian Michael Blackson and singer Akon? (Only after looking up both of them and watching the extras did I come close to comprehension.) 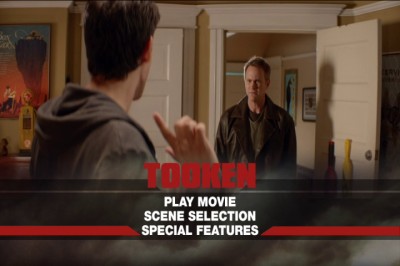 The DVD
Tooken arrives on one DVD, packed in a standard keepcase, which comes in a slipcover that repeats the cover art. An animated menu offers a choice to play the film, select scenes and check out the extras. There are no audio options and no subtitles, but closed captioning is available.

The Quality
The anamorphic-widescreen transfer is decent for DVD, with appropriate (if somewhat dull) color, sufficient black levels and a good amount of fine detail (clothing textures are rather evident), but there's some noticeable pixelation in areas, around hair and along hard edges, while the film has an overall flat, video look to it.

The 5.1 Dolby Digital audio offers good separation between the dialogue, which lives entirely in the center channel with the sound effects, and the score, which is distributed through the surrounds. However, they shall never meet, which leaves the film a little light in the oomph department, as any explosive elements are limited to the center speaker, and there's nothing in the low-end to speak of. What is there is clean, but it's not super effective.

The Extras
Things get started with "Tooken Unwrapped", a 16:02 behind-the-scenes featurette filled with on-set footage and a lot of clips from the movie. Interviews with Asher and the cast (including the dog) review the characters and plot, before moving on to memorable scenes from the production and the history of the film's development, including the climactic battle scene. It wraps up with the movie's trailer (1:38) (which is also available to view separately.)

"Cool Cribs" (4:48) is a spoof of MTV's Cribs, with Big Chocolate showing off his opulent home. It's mildly amusing at points, like the emotional story he tells toward the end, but, like the film, it could use laughs.

There are four deleted scenes. "Hospital" (1:38) is a home movie of Kim's birth, which looks to have been planned as the original opening scene, Aside from pushing too far on some dumb jokes, it actually would have been a fine set-up. "Brownfinger" (7:00) is a slightly-longer (and mostly meaningless) version of the introduction of Brownfinger. "Basement Breakout" (3:13) adds back in some rightly-removed seconds from this scene, while the same occurs in "Swordfight" (4:43). Other than "Hospital", this is mostly padding to the extras. 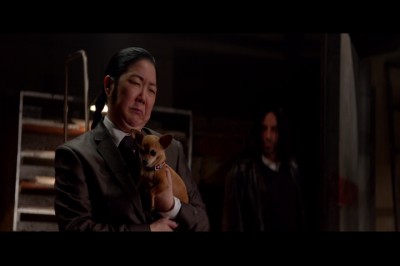 The Bottom Line
A competently made but mostly unfunny spoof, Tooken can be praised for not using the Friedberg/Seltzer recipe of throwing scattershot pop-culture references at the audience, but the jokes are either overly telegraphed or simply weak, resulting in few if any chuckles along the way. The movie looks and sounds fine, and includes a few minor extras, but nothing about the presentation can overcome how uninteresting the film is.