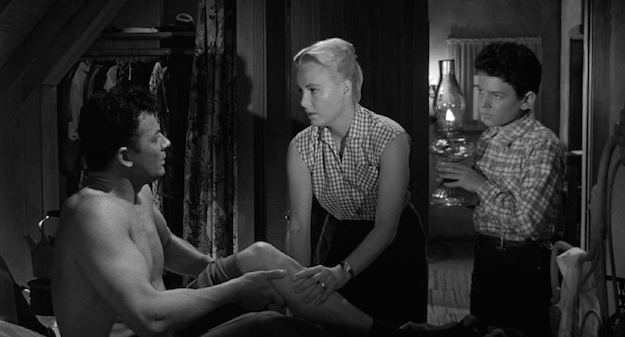 Storm Fear, from 1955, is the directorial debut of actor-producer Cornel Wilde (Forever Amber, The Big Combo). While Storm Fear features some sterling suspense sequences that anticipate Wilde's excellent directorial effort The Naked Prey (1966), the film also has a frustratingly inconsistent tone. Performances range from gritty and subtle to downright histrionic, sometimes within the same scene. However, the script by Horton Foote (To Kill a Mockingbird, The Trip to Bountiful) is lean and focused enough to keep the film from ever running too severely off the rails.

Wilde stars as Charlie Blake, a criminal on the run with a bag of cash, a bullet in his leg, and two partners, the gruff Benjie (Steven Hill) and his mink coat-wearing moll Edna (Lee Grant). This unlikely trio escape to the mountains and the remote home of Charlie's brother Fred (Dan Duryea). Fred is a writer with respiratory issues, so he and his family live out in the middle of nowhere so the country air can improve his health. Storm Fear is set in winter, however, and the cold seems to be doing just the opposite.

And the cold isn't just coming at Fred from outside either. Fred's wife Elizabeth (The Big Combo's Jean Wallace) has fallen out of love, and their hired man Hank (Duel's Dennis Weaver) hopes to find a way into her heart. Once brother Charlie and his collaborators show up unannounced, those simmering tensions inside Elizabeth get turned up to a boil. Around ten years before, Charlie and Elizabeth were an item and, in fact, the film begins not-so-subtly hinting pretty early in the story that Elizabeth's son David (David Stollery) does not belong to the brother she married.

For its first two-thirds, Storm Fear sticks almost entirely to the interior of the house, as the different assembled personalities ricochet off of each other. Fred wants the criminals out, but he is so downtrodden that he has almost no agency. Charlie looks to Elizabeth for help recovering from his gunshot and maybe for a chance at ironing out some problems from the past. Little David takes an immediate liking to this Uncle Charlie he has never met before, which causes Elizabeth to worry about Charlie's bad influence on the boy. Benjie doesn't like being cooped up and appears to be cooking up some escape plans of his own. Edna tries her best to soothe the others' frayed nerves, but she can only do so much.

The actors are frequently over-the-top but totally engaging, with Wilde and Hill particularly well-matched as uneasy allies who could become enemies at any moment. Stollery, best known as Marty from Disney's show Spin & Marty, has the toughest role in the picture -- he's the emotional core -- but his intelligently layered portrayal puts many of his adult colleagues' hammier instincts to shame.

The final big chunk of the film takes place on a snowy mountainside as the robbers decide to escape on foot before snow plows can clean up the roads to Fred's house and give the cops a chance to find their getaway car. The physical claustrophobia of the house is replaced by emotional claustrophobia, as these characters realize they want nothing to do with each other but their fates are joined -- that is, until somebody makes a move.

A strong ending can make earlier storytelling missteps forgivable, and that is the case with Storm Fear. Wilde so perfectly sticks the landing, as both actor and director, that the handful of overwrought moments that struck me as corny are pretty much forgiven. Certainly anyone who enjoys '50s crime melodramas will find plenty of things to enjoy in this mildly flawed flick. 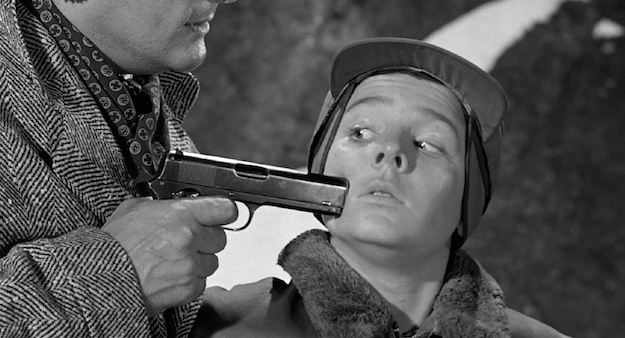 The Video:
This is one of the better transfers I've seen presented as part of the Kino Lorber Studio Classics series. The AVC-encoded 1080p 1.85:1 image looks like it has come from a fresh fine-grain transfer (the disc offers no documentation on this either way), with excellent detail reproduction and a great-looking film grain appearance. Contrast is subtle, with quite good shadow detail. No significant compression issues that I spotted. There are some instances of dirt and other specks, but these mostly appear during opticals (titles, dissolves, etc.).

The Audio:
The DTS-HD MA 2.0 mono audio mix is fairly narrow, but reproduces the dialogue and stormy effects well. Elmer Bernstein's score is quite busy and omnipresent, but it never steps on any of the other audio in an off-putting way. I re-watched a chunk of this with headphones on, and I picked up on a subtle bit of crackle and some pops when some of the shots changed. These are pretty quiet, and I did not pick up on them in my living room set-up, but they are worth noting. No subtitles.

Special Features:
None. Just a few promo trailers for some other Studio Classics releases like He Ran All the Way.

Final Thoughts:
Despite its occasional exhausting moments of overcooked melodrama, Storm Fear is mostly a fun little potboiler that does right by its simple but smart premise. The new HD transfer on this disc looks fantastic. Recommended. 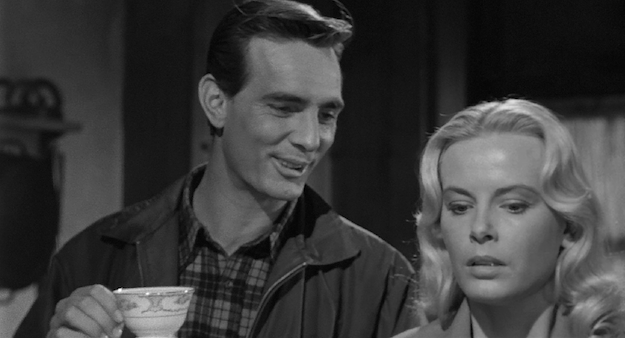