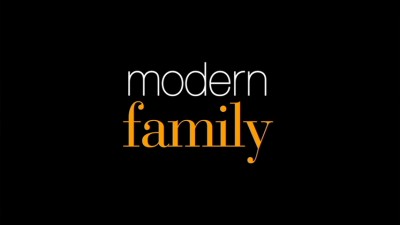 
The Story So Far...
Telling the story of three generations of the Pritchett clan, centered around Jay (Ed O'Neill) and his kids Claire (Julie Bowen) and Mitchell (Jesse Tyler Ferguson), and their respective families, Modern Family was, for all intents and purposes, an instant hit with critics and viewers (earning five Best Comedy Emmys in its first five seasons.) A single-camera sitcom without a laugh track, this mockumentary series (complete with talking head interviews with the family) blends together three types of relationships and the laughs and struggles that come with them, with a heaping helping of heart, to create a genuine feel-good show with a massive amount of laughs. The first five seasons have been released on DVD (with the first few also available on Blu-Ray), and DVDTalk has reviews of the majority of the releases.

The Show
Season five, which focused on the wedding of Cam (Eric Stonestreet) and Mitch and a new job for Claire, was not a high point for the show, even while winning a fifth-straight Emmy, but it didn't mark the beginning of the end, as the series rebounded in season six. Part of it is the return to normalcy for all three families, which means more of the usual calamities they unwittingly inflict upon themselves, and more episodes that play to the show's strengths, namely its tremendous cast, its ability to build multiple plotlines into a cohesive episode and a skill for smart, well-constructed comedy, with wordplay and sight gags, that builds to a crescendo. It's the rare sitcom that has a really brilliant, yet subtle gag like the "Grease chorus" in "Spring Break" and doesn't explain the joke for the large percentage of viewers who probably don't get it.

There's a bit more of a focus on the kids this time around, which make sense as they age into adulthood, with Haley (Sarah Hyland) trying to figure out her life after flaming out of college and Alex (Ariel Winter) dealing with the stress of trying to get into the perfect college. Meanwhile, Luke (Nolan Gould) and Manny (Rico Rodriguez) cope with their teenage years and Lily (Aubrey Anderson-Emmons), who mainly exists to throw out one-liners and create stress in Cam and Mitch's lives, remains the show's weakest link (perhaps in a lesser show she wouldn't stand out so much.) As the misfit in a house of misfits, Alex gets plenty of opportunities to throw snark around, but it's Hayley who ends up being more interesting, mainly for her will-they-won't-they relationship with the Pritchetts' manny Andy (a delightfully against-type Adam De Vine). Symbolic of the Dunphy family's far-from-perfect personality, she's become more than the ditzy, popular girl she was when the series began (though her party-first attitude remains firmly in place.) 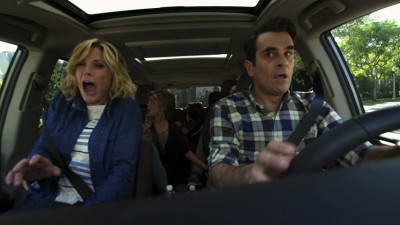 While Joe, the new son of Jay (Ed O'Neill) and Gloria (Sofia Vergara) remains present (thankfully never played simply for cuteness), the only change in the cast this season is the introduction of new neighbors for Claire and Phil (Ty Burrell)l, in the form of a trashy medical marijuana distributor named Ronny (Steve Zahn) and his wife Amber (Andrea Anders). Though a touch stereotypical as a sitcom device, complete with the neighborly feud that runs its course over their first few episodes, the culture clash between the two families is enjoyable (particularly for the reactions they get out of Claire) and Zahn is great as Ronny. The new neighbors don't overstay their welcome though, perhaps choosing to spend time with one-time Dunphy neighbor Kevin Hart, who disappeared from the series even faster. There are a few new guest stars to enjoy in season six though, with Kristen Johnson playing a hot mess who works with Mitch and invades his home, Brooklyn Nine-Nine's Stephanie Beatriz as Gloria's Colombian sister, Tyne Daly as Lily's tough teacher, the wonderful Andy Daly as Alex' principal and a truly memorable racist given life by Natasha Leggero,

While some of Modern Family's old stand-bys are present and accounted for, including a Halloween episode that shows off Claire's obsessive side, another Valentine's Day show for Claire and Phil's sexy alter-egos and a chaotic Thanksgiving adventure (as well as the return of Elizabeth Banks and Nathan Lane), the show tried out some new roads this season, like the Rashomon-esque "The Day I Almost Died," which follows each character after a traumatic experience, and "Knock ‘Em Down," which embeds an uncomfortable Jay into gay culture, as he pretends to be homoesexual in order to bowl on Cam's league team. It was a risky idea for a show that's received criticism for the straight Stonestreet's portrayal of an overly-emotional gay man, but it acquits itself well, touching on the idea of how people think a gay man is supposed to behave and offering Jay an opportunity to see what it's like to have to hide who he really is. Though the series still trafficks in morals about how people should treat each other and the importance of family, it's gotten far less obvious about it, even dropping the once-mandatory sappy speeches that ended each episode.

The creative high-point of the season however is "Connection Lost," which easily could have been just a gimmicky experiment, as the entire episode takes place on Claire's computer screen as she sits stuck in an airport, trying to track down Haley following a big fight. Integrating a variety of popular technologies which loop together the show's characters, from Facetime to Facebook to email, the story unfolds smoothly like a well-crafted mystery, despite never leaving Claire's desktop. Though you could view it as a commentary on an always-connected society that manages to not really be connected in a meaningful way, it is a great example of the show's rapid-fire sense of humor and ability to get laughs out of more than just a punchline, not to mention the skill and talent that goes into the series both in front of and behind the camera. 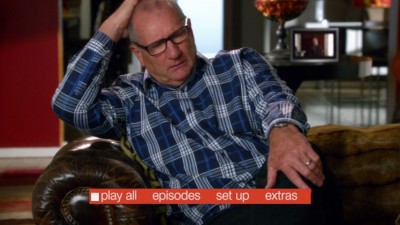 The Discs
Though the series used to be released on Blu-ray, the 24 episodes of the fifth season of Modern Family are spread across three DVDs, which are packed in a clear standard-width keepcase with a dual-hubbed tray. Each disc's animated menu features options to to play all the episodes, select shows, adjust the setup and check out the extras. There are no audio options but subtitles are available in English SDH, Spanish and French.

The Quality
These anamorphic widescreen transfers are about as close as standard definition is going to get to matching the quality of the show's HD broadcasts. Color and skin tones are appropriate throughout, while the level of fine detail is rather high and black levels, though not often integral to this well-lit show, are solid. Despite packing eight episodes to a disc (remember, the Blu-rays had the same layout) there are no real notable problems with compression artifacts, though some minor pixelation can be seen along hard lines in some places.

The Dolby Digital 5.1 tracks are noticeable mainly during the show's swinging theme song, where the surrounds carry the power of the tune. Otherwise, the show lives mainly in the center channel, with very clear dialogue, while the surrounds hold some very light atmospheric effects (like background noise.) Though there's no real presence in the low-end, the rest of the sound is effective for a dialogue-driven comedy .

The Extras
Sadly, the commentaries of season four were the exception rather than the rule, as there were none for season five and none here. That's not the only place where the extras experienced a reduction, since the deleted scenes, which once were plentiful, are down to a miniscule four, running just 2:52 in all. On the plus side, the brief content here is enjoyable, including a creepy scene with Lily and an amusing Village People gag that was understandably cut.

As with previous sets there are several featurettes focused on specific episodes, starting with a pair of holiday-themed segments, "Awesome Halloween" (4:35) and "A Modern Thanksgiving" (5:25). Both feature on-set footage and interviews with cast and a few crew members, as they talk about each episode's plot points and talk a bit about the related holiday. There's not a tremendous amount of insight, but the participants are personably.

That's especially true for the subject of this season's "A Day with" entry (6:08), Julie Bowen. A fun personality, Bowen walks us through her work day and chats with collaborators, including Danny Zuker and a baby-car riding Gould. Though getting to explore her life on set is interesting, it's her personality that's the most engaging thing about this item.

The season's big coputer episode is front and center in "Modern Connections: The Making of an Episode" (8:58), which makes perfect sense as the season's most unique outing. Levitan and company talk about the inspiration for the episode, the challenges they face, the techniques and technology utilized in production to solve problems and the extensive post-production required by the storyline.

Wrapping up the extras is an 11:26 gag reel, which oddly starts out with a highlights package for this season before moving into flubs, breaks, dancing and, most enjoyable of all, Vergara's difficulties with the English language, which offer up very lighthearted laughs. 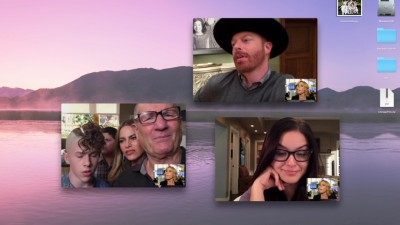 The Bottom Line
Even if it wasn't the show at its best, season five was still enjoyable, but this season is certainly a return to form, with some great episodes, including the unique "Connection Lost" and all-around terrific performances. Though not as good as the previous Blu-ray releases (natch) the quality is high, but the bonus content has taken a bit of a dip since season three, even if the featurettes are decent. For comedy fans, the show offers finely crafted sitcom greatness.