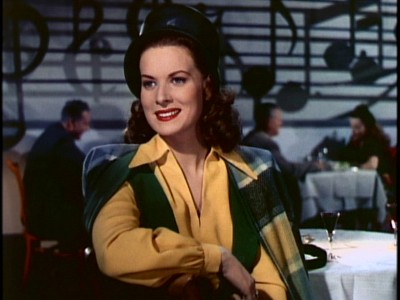 Ready for a movie marathon featuring one of cinema's most enchanting redheads? Fox Cinema Archives continues their 3-in-1 repackaging of their back catalog with three vehicles for one of their 1940s-era contractees, Maureen O'Hara. The carefree musical Do You Love Me (1946), and moody dramas The Forbidden Street (1949) and Sentimental Journey (1946) didn't have the lasting impact of the four O'Hara movies featured on the recent 4-DVD set TCM Greatest Classic Movies: Legends. These lavish 20th Century Fox productions served the actress well, however, in a variety of genres. As with the other Fox Cinema Archives sets, this package combines three made-to-order DVDs into one affordable package.

Do You Love Me (1946; 91 minutes)
Although Fox had been known for splashy, colorful musicals starring Alice Faye and Betty Grable, they tried the same formula on the non-singing, non-dancing O'Hara for 1946's Do You Love Me - with mixed results. This particular one has O'Hara as the object of affection for three distinct guys: dull professor Richard Gaines, crooner Dick Haymes, and swing trumpeter (and Grable's spouse) Harry James. At the beginning, O'Hara gets dressed down in glasses and frumpy clothes as Katherine Hilliard, no-nonsense dean of the stuffy classical music school which bears her family name. Traveling to New York by train, she encounters Barry Clayton (James), a slick jazz trumpeter who makes a bet with a fellow musician that his swingin' music could charm even a buttoned-up ice queen like Katherine. Alas, Barry loses the bet ("She'd give a mosquito pneumonia if bitten."), leaving Katherine unnerved when she comes to the city to work with a conductor colleague, Herbert (a delightful Reginald Garner). Katherine gives herself a glamorous makeover and goes on a mission to expose Barry as the shallow wolf he is. Lacking an escort to Barry's club, Katherine picks up Jimmy Hale (Haymes), a struggling singer who coincidentally is friendly with Barry. Like falling dominos, Jimmy and Barry end up under the beautiful dean's spell - with two admirers and a fiancee back at the college, what's she to do?

Though it ends up deflating in the second half, Do You Love Me satisfies as a candy-colored vehicle for the smooth musical stylings of James and Haymes. Looking sensational in a Bonnie Cashin-designed wardrobe, O'Hara overcomes the plot's sexist overtones with poise and charm (really, she plays Plain Katherine as being simply unaware of what her possibilities are). This movie is pretty typical of the undemanding, chiffon-light musicals Fox pumped out regularly in the '40s - none of the numbers particularly stand out, all are pleasant diversions dripping in that Swing-era sound. They're given smooth direction by Gregory Ratoff, who integrates them effortlessly into the plot. 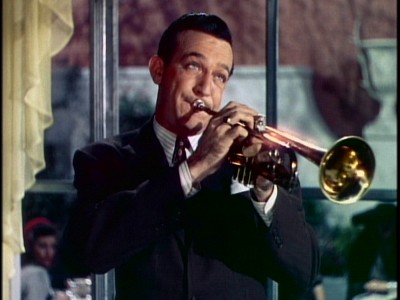 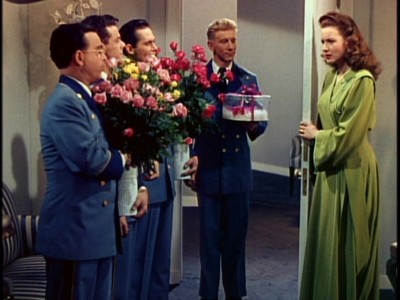 The Forbidden Street (1949; 91 minutes)
A gothic melodrama set in 19th century England, The Forbidden Street sets up an appropriately tense atmosphere with director Jean Negulesco (Johnny Belinda) getting fine performances from O'Hara and Dana Andrews. Despite their efforts, however, it winds up being merely average with three seemingly different stories awkwardly wedged into one, densely plotted movie. Figuring in all three is O'Hara's character, Addie, a well-to-do young woman fascinated by Brittania Mews - the grimy working-class urban alleyway she peers over daily from her bedroom window. Story #1 concerns Addie's romance with Henry Lambert (Dana Andrews), the art instructor hired to tutor Addie and her cousin, Alice (Anne Butchart). Despite the disapproval of Addie's parents, the two marry and she ends up living in his tiny hovel on Brittania Mews. She comes to regret it, however, as her disdain for his intricately carved marionette collection turns Henry into a combative alcoholic. Story #2 comes in when a frightening crone (Dame Sybil Thorndike) sees Henry fall down the stairs to his death. The old lady, Mrs. Mounsey, subsequently bribes Addie into paying off her silence, dashing Addie's dream for a better life. Addie's fortunes swing upward in Story #3, however, with the serendipitous arrival of Gilbert Lauderdale (Andrews), a man who looks exactly like Addie's husband. Gilbert's temperament is more gentle and kind than Henry, however. Despite Gilbert's being married to an American (Mary Martlew), Addie falls for the man - who would eventually play a major role in turning Brittania Mews around from a forgotten alleyway to a true destination.

The bones of an enthralling story lie below The Forbidden Street, despite that overstuffed plot and quirky elements like the dubbed-over voice work on Dana Andrews' Henry. O'Hara displays the same feisty spirit seen in movies like The Quiet Man, while Andrews does well with his dual role. I also thought Thorndike was brilliant in her physically disgusting characterization, zestfully playing a woman with zero appeal whatsoever. It's strange, all right, yet this gothic mishmash ended up as one of O'Hara's better vehicles at Fox. 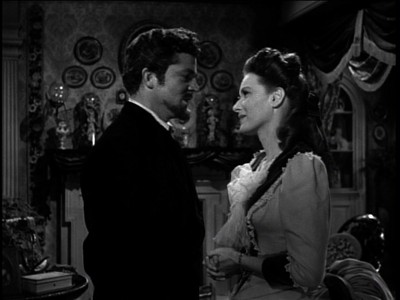 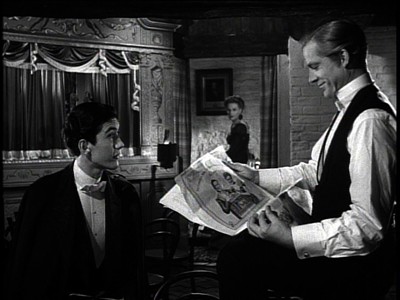 Sentimental Journey (1946; 94 minutes)
With Sentimental Journey, O'Hara went the full-on tearjerker route as a successful actress who adopts a child, facing unexpected consequences along the way. The soapy, overly familiar story has O'Hara's Julie Beck facing a heart ailment which doesn't affect her glamorous looks - wondering what will become of her immature husband, William (John Payne), should she die. On a walk along the beach, she meets an imaginative orphan girl named Hitty (Connie Marshall). Having fallen for the curious, pigtailed tyke, Julie goes about adopting her without fully realizing the effect it'll have on William. Although Hitty charms the household staff and the Becks' theater friends like "Uncle" Don (William Bendix), William's reluctance at being a dad crushes Julie's spirit. This handsomely produced, decently acted melodrama gets somewhat weird in its second half, with Julie's sudden death (not a spoiler, really). A traumatized Hitty receives counseling on how to deal with the grieving, damaged William from Julie's ghost (shades of the girl taking to dead Simone Simon in 1944's The Curse of the Cat People). Eventually, William learns that Hitty is Julie's lasting gift to him, in her memory.

Sentimental Journey pushes all the right "Women's Picture" buttons, although it ends up being too manipulative and treacly. Despite a supernatural twist, the unexceptional story is a snoozer. O'Hara's Julie makes the mistake of adopting a child whom the actress molds into a mini-Julie, which makes William into an emotional wreck once the woman he loved dies. That in itself is a worthy plot angle, yet there's a sour note in how young Connie Marshall plays Hitty as a servile little robot-child. The performance is strikingly similar to Mara Hobel's fake-obsequious Christina Crawford in Mommie Dearest (their dressing gowns even match!). Lacking Christina's maliciousness, however, Hitty ends up an insincere user of a girl. As with the other movies on this set, O'Hara herself is a lovely, calming presence. 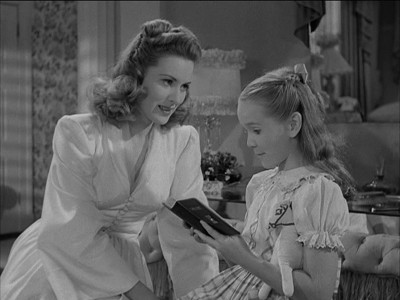 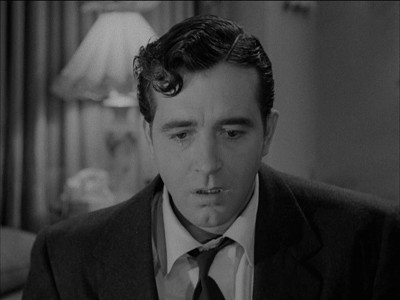 Presented in their original 4:3 full-frame aspect ratios, the transfers use prints of varying age and quality. Sentimental Journey is the most pristine, visually appealing transfer of the three. It's a handsome-looking image sporting just a few thin vertical lines, splices and bits of dust. The Forbidden Street's black and white visuals tend to be overly dark and artifact-spotted. Lush Technicolor is the main attraction with Do You Love Me, although like many Fox m.o.d.'s of their color musical library this particular one is muddy and lacking in focus.

All three discs come with the films' single mono track, sporting the expected limited dynamics with occasional pops, clicks and hiss. Except for some distortion during Do You Love Me's musical numbers, I didn't notice anything outstanding either way on these discs. As usual with the Cinema Archives m.o.d.'s, no subtitles are provided.

No extras. Each disc sports a simple, static menu with the films' poster artwork. Chapter stops are included every ten minutes, not between scenes.

The Fox Cinema Archives three-packs are a relatively affordable, space-saving way to stock up on a favorite actor's movies. The Maureen O'Hara set, containing Do You Love Me, The Forbidden Street and Sentimental Journey, showcase the beautiful redhead's expertise across several different movie genres. Densely plotted gothic drama The Forbidden Street gets a thumbs-up from me, while the other two are middling efforts enlivened by O'Hara's steely serenity. Rent It. 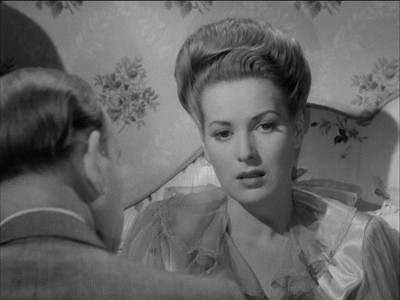 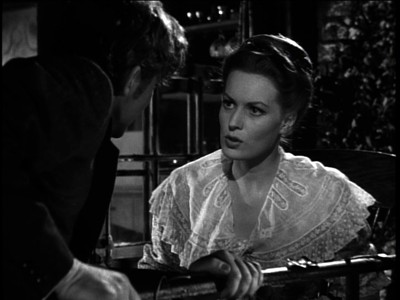