Child 44 takes an excellent premise for a prestige serial killer procedural and runs it into a muddled mess of mediocrity by adding enough unnecessary sub-plots to fill two miniseries. It's a shame, because if the finished film focused more on gracefully fitting its own IMDB logline ("A disgraced member of the military police investigates a series of nasty child murders during the Stalin-era Soviet Union"), it could have ended up as a lean 100-minute thriller with a dynamite cast and a wholly original setting for the genre. 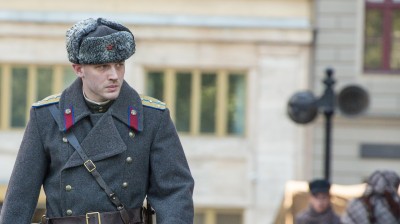 Unfortunately, the cast and the setting are wasted on a bloated screenplay made up entirely of sub-plots and an uneven direction that can't settle on a satisfactory tone. Adapted by Richard Price from Tom Rob Smith's bestselling novel, Child 44 shines when the serial killer sub-plot occasionally pops up to remind the audience what the film was supposed to be about in the first place. The procedural sequences, where no-nonsense military investigator Leo (Tom Hardy) tries to get to the bottom of a series of bizarre child murders while struggling to navigate the paranoid and dysfunctional bureaucracy of Stalin's Russia creates some riveting stuff as far as this genre is concerned.

And why shouldn't it? There's some smart writing here that inserts a bevy of organic obstacles for our protagonist to overcome so he can prevent other children from falling prey to a deranged killer who strangles his victims and takes out their organs before leaving them next to train tracks. First, there are the limitations of 1953 Russia's forensic science, where a lot of state-assigned doctors aren't even aware of some of the most basic autopsy procedures. Second, and most importantly, Stalin's Russia promotes a culture where violent crime is a product of the barbaric Western society, so convincing the higher authorities of the mere existence of such a depraved killer in their beloved and "civilized" Mother Russia proves to be harder than catching the actual killer.

I realize that this description puts forth a much more riveting narrative than the final feature we get, which is where we yet again learn a valuable lesson in the importance of execution between the premise and the final product. It's possible that the novel contains the unnecessary sub-plots that unceremoniously take over the story, and they might work better in their literary counterpart, but on film, they almost all prove to be dead weight.

A mortal rivalry between Leo and a psychotic investigator named Vasilli (Joel Kinnaman), the excruciatingly slow revitalization of love between Leo and his estranged wife Raisa (Noomi Rapace), drama that erupts from Raisa being named in a list of spies after a torture session with an assumed traitor (Jason Clarke), these sub-plots prove to be unnecessary. The whole endeavor points to an unsuccessful attempt by director Daniel Espinoza to construct an epic period drama with serial killer procedural undertones rather than the other way around.

Perhaps the goal was to accentuate the film's anti-totalitarian themes, a system where paranoia instead of truth is rewarded and the squeaky clean image of the establishment is all that matters. However, those themes are already in the serial killer plotline, delivered in a subtler fashion to boot. Even though we expect more from a cast that also includes Gary Oldman as a seasoned general with considerable policing experience, the performances are uniformly decent, if we are to ignore the varying intensity of Russian accents. 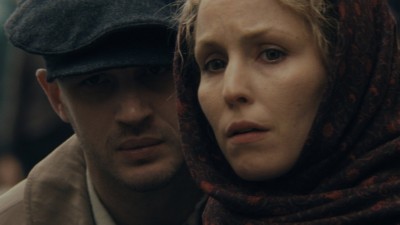 Child 44 contains the predictable drab colors and high levels of blacks that one would expect from a serial killer film that also takes place in 1950's Russia. It's a miracle that any bright colors were allowed to enter the lens at all. The 1080p transfer does an excellent job capturing the film's understandably dreary yet kind of beautiful cinematography. The contrast and black levels are especially impressive.

Child 44 presents an audio mix that can be expected from a prestige period drama/thriller, nothing too showy or fancy, but not a typical drama mix that sticks to the front channels either. We get a DTS-HD 5.1 track that fully utilizes the surround channels when the score or the sfx are pulled into the foreground, and the dialogue is as clear as it can be.

Reflections of History: An 8-minute featurette where the cast and crew talk about the film's realistic costume and prop design. Kind of a fluff piece with very little important information.

Overlong by at least 25 minutes, Child 44 should have either stuck with the serial killer plot in order to present a more streamlined version of the story, or should have been extended into a mini-series where all the other sub-plots could have been given enough room to breathe. For example, we get the feeling that there's a lot more to the rivalry between Leo and Vasilli. In this state, it's kind of a missed opportunity, one that could still be worth a rental only for the parts that really work.