Rebel: The Complete Series, The

Shout Factory // Unrated // August 18, 2015
List Price: $59.97 [Buy now and save at Amazon]
Review by Stuart Galbraith IV | posted August 22, 2015 | E-mail the Author
The Rebel (1959-61) is a surprisingly good Western series, several cuts above the usual TV oater of the period, when the genre positively choked prime-time network schedules. For this reviewer, by far the best shows airing during this time were Gunsmoke (still in its taut, black-and-white, half-hour version) and Have Gun - Will Travel. The Rebel approaches the level of those programs, no small compliment.

The series stars Nick Adams as Johnny Yuma, an introspective veteran of the Confederate Army in the years immediately following the Civil War. Plagued by memories of that unhappy experience (though resigned to the Confederacy's defeat), he keeps a journal of his wanderings through the defeated South and of the people he encounters, often interceding in conflicts he sometimes must resolve with the help of his sawed-off double-barreled shotgun.

Variously directed by Irvin Kirshner, Bernard L. Kowalski, and a young Bernard McEveety (then transitioning from assistant to full-fledged director), working with ambitious, thoughtful teleplays, The Rebel was co-created by producer-writer Andrew J. Fenady, who later oversaw the equally undervalued Branded (1965-66) with Chuck Connors, and later still a jumble of interesting films and TV-movies, including the John Wayne film Chisum (1970), Terror in the Wax Museum (1973), the amusing The Man with Bogart's Face (1980), and two of Charles Bronson's last projects, both interesting: Yes Virginia, There Is a Santa Claus (1991) and a remake of The Sea Wolf (1993).

The Rebel's other co-creator was the show's star, Nick Adams, the driven, ambitious, and outspoken actor who more or less self-destructed under the weight of a career that never quite seemed to be moving in the direction he desired. He appears to have played a very active role behind the creation of The Rebel, in addition to headlining the series. Though Adams could occasionally be hammy in some of his ‘60s projects, for the most part on The Rebel he's very good.

Shout! Factory's The Rebel: The Complete Series offers the 76-episode series via watchable 16mm elements, which to their credit are uncut and include the program's original theme song, sung by Johnny Cash. (The song was usually replaced with generic theme music once the show went into syndication.) Further, the package is complemented with a lot of good features, including new interviews with writer-producer Fenady, Adams's grown children, commercials, and an interesting unsold pilot for The Rebel's proposed companion series, The Yank. 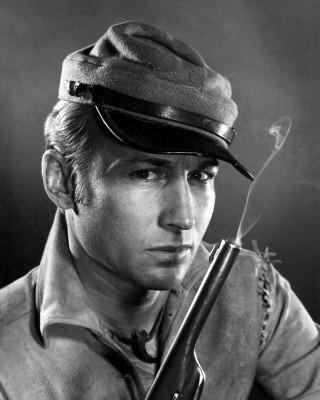 In the pilot, Johnny Yuma returns home two years after the Civil War has ended, only to learn that his sheriff father has been murdered and the weak-willed townspeople are virtually held captive by an imposing outlaw (Dan Blocker, in what must have been his last work prior to co-starring on Bonanza) and his gang. Johnny vanquishes the outlaws and, guided by newspaperman mentor Elmer Dodson (guest star John Carradine) decides to wander the South while keeping a journal of his travels.

From here, The Rebel becomes part quasi-Western anthology drama, with Adams the only continuing character (Carradine's seems to have been conceived as a semi-regular, but he returned just once more). In this regard it anticipates later, similar programs like The Fugitive with David Janssen. However and somewhat innovatively, the series concurrently explores Johnny's conflicted emotions as a survivor of the defeated Confederacy; some shows include flashbacks of Johnny's wartime experiences.

Credited writers include Lou and Peggy Shaw, Frank Chase, Jack Laird, Harry Julian Fink, Christopher Knopf, Bruce Geller, Cyril Hume, and others, with no one or two names really dominating. It hard to determine to what extent Fenady and Adams contributed to the writing but it's probably fair to say both functioned as very hands-on story editors and probably contributed a lot of uncredited changes.

It also appears that Fenady worked closely and well with directors Irvin Kershner and Bernard Kowalski, as well as Bernard McEveety, whom Fenady frequently hired long after The Rebel had ended. It was not uncommon for shows of this period to alternate between two or three primary directors, but rare if not unprecedented for a Western drama to have 85% of two full seasons helmed by just two men with a third, promoted from within, picking up the slack. Kershner, of course, had a long and respectable career in feature films soon after The Rebel ended, while Kowalski and McEveety had prolific runs helming TV movies and episodic television until their deaths.

Filmed in black-and-white and in 35mm, The Rebel has the polish of 30-minute mini-movies. Originally airing on ABC, The Rebel used the studio and ranch facilities of Paramount Pictures and, oddly enough, was produced by (Mark) Goodson-(Bill) Todman Productions, the company responsible for a gazillion game shows but almost no television dramas.

Utilizing 16mm prints, The Rebel looks far from great but certainly superior to public domain releases that almost always use far more battered and worn elements. Plus all the shows this reviewer examined appear complete and unedited. (Original commercials featuring Adams out of character and also derived from 16mm sources, are included on the bonus disc.) The mono audio (reprocessed for Dolby Digital mono) is likewise okay. Each season gets its own DVD case and the series is spread over 10 single-sided DVDs.

An eleventh bonus disc includes all the supplements: "Looking Back at The Rebel," an hour-plus interview with writer-producer Fenady, who's quite a character, full of energy and anecdotes; "Nick Adams Remembered," an interview with Nick's children, Allyson and Jeb, a featurette that remains upbeat and never delves into Adams's later years and mysterious, premature death; the unsold pilot for The Yank, with James Drury as Johnny Yuma's blue-bellied counterpart, who packs a physician's bag rather than a gun; Rebel commercials featuring Adams; and a production stills gallery.

A superior Western TV drama, The Rebel is Highly Recommended.