Zeitgeist Video // Unrated // June 23, 2015
List Price: $29.95 [Buy now and save at Amazon]
Review by Scott Pewenofkit | posted August 24, 2015 | E-mail the Author
The Movie
Wartime office satire Zero Motivation can be summed up by a character in the film who misquotes Franz Kafka at an office party where she is being promoted: "The chains that bind mankind are made of office paperwork" The film has a great feel for the absurdities of bureaucratic entanglement in a story about two female friends who are customarily drafted to serve two years in the Israeli Army, where they are banished to a claustrophobic human resources office where boredom and in-fighting are the norm.

The film is noteworthy for the apolitical stance it takes regarding the Israeli-Palestinian conflict. In place of typical combat film archetypes, Zero Motivation captures the boredom of office work on a military base seen through the eyes of a group of women who are mired in the senseless, often funny, red tape that goes with keeping an office running. It's like a war movie without the war, where personal conflicts are carried out on the battlefield of computer desks, among paper shredders and mundane office rituals. Think of Office Space carried to increasingly absurd heights, and with much darker humor. 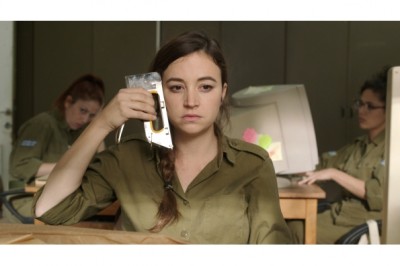 According to Zero Motivation, being forced to shred office documents and serve coffee to male superiors is far more indignant than fighting in a war. The film opens on a military bus that leaves for a remote outpost in the desert. On the bus are two best friends, Zohar (Dana Ivgy) and Daffi (Nelly Tagar), who are banished to a human resources office where they have orders barked at them by domineering head officer Rama (Shani Klein), who gives Daffi the dubious title of head paper shredder.

Zero Motivation is divided into three separate stories, vignettes that underlie the strangeness of the main characters' lives. Amid long fights against the boredom and monotony of their lives in the military, Daffi battles the ennui of her post by trying to convince her superiors that she should be reassigned to an office to Tel Aviv. In the beginning of the film, she is charged with showing the ropes to a young recruit who isn't who she appears to be, the plot development of which segues into the film's second half, where one soldier is apparently possessed by the ghost of a dead soldier. Zohar is later saved by this seemingly possessed girl in one of the film's darker, more serious moments. 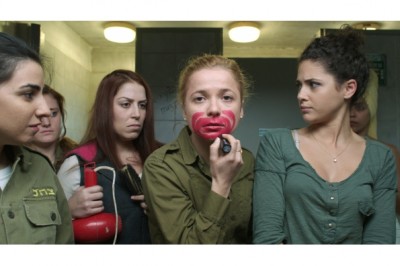 In the final third of the film, Daffi decides that in order to be transferred to Tel Aviv, she must become an officer, like Rama, which alienates her from her best friend Zohar. The final confrontation of the film sees the film's absurdest-office work theme played full-tilt as Daffi shreds every single document in the office and fills the remains, ceiling-high, into an entire room.

The friendship between Daffi and Zohar is the film's core, and gives Zero Motivation its only engaging emotional content. Daffi's obsession with being relocated to Tel Aviv, where she believes she will have an easier time serving in the military, eventually drives a wedge between her and Zohar, who succumbs to the boredom of the human resources office by becoming obsessed with the simple computer games that she remains absorbed in at her desk. In the end, the film shows that even the senseless bureaucratic entanglement cannot ruin their friendship. 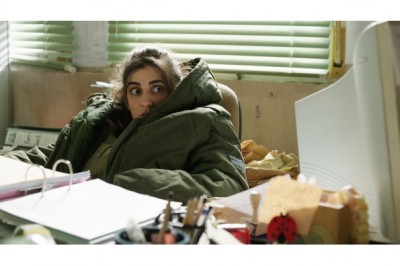 And so at its core, Zero Motivation is about two friends fighting boredom in the Israeli military while becoming entangled in its senseless bureaucratic red tape. These themes set commentary about the ongoing war between Palestine and Israel far into the background, until they go virtually unmentioned in the film. The film's apolitical stance makes sense when the viewer considers its absurd nature.

The DVD:
Video:Zero Motivation was shot in a 1.85:1 aspect ratio, and its monotonous color scheme work well, corresponding well to the film's desert barracks setting. The solid colors, sandy desert colors, and concrete greys all run the risk of making the film appear drab and visually unappealing, but, given the story's setting and its themes involving the mind-numbing monotony of administrative work, the visual style works. Given the surreal nature of Zero Motivation, one is surprised that the surreal, trippy visual style of the desert-set 1999 film Three Kings wasn't referenced, or utilized. But on its own terms, the look of the film transfers well to the DVD format. Muted colors and shadows are well-balanced.

Audio: The film was made in Hebrew and has English subtitles. The audio, a 5.1 Dolby SRD mix, works well on multiple-speaker systems. But given the film's low-key nature, such an enveloping audio mix would not necessarily be missed.

Extras: There are a handful of extras on the disc that enhance the viewing experience of Zero Motivation because the viewer is given a chance to better understand director Talya Lavie's motivation for making the film, and her evolution as a filmmaker.

The desire to make a film about her service in the military was made by her in a 2005 19-minute long student film called The Substitute, which is about a female Israeli army draftee who's plans to be transferred to a base in Tel Aviv are thwarted when her replacement commits suicide. While visually flat, the film shows promise, and it also shows Lavie's talent for identifying and playing up the absurd elements of her script.

The Waitress, animated short film Lavie directed in 2000, is also included, but it gives little indication of the filmmaker she would become with Zero Motivation. This seemingly plotless animation shows a waitress waiting on tables, and ends with her floating to the sky through a restaurant's ceiling.

Final Thoughts:
Zero Motivation is an understated film whose strengths lie in director Tayla Lavie's ability to draw on her own experiences with boredom and ennui in the Israeli army. While visually uninteresting, its flat style works well with the film's themes of monotony in a human resources office. It plays like the lighter, more forgiving version of a Franz Kafka short story.