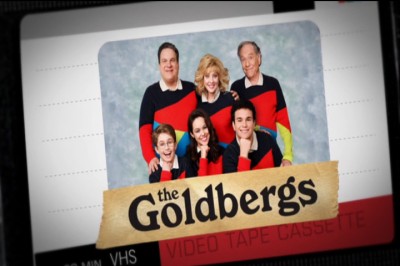 
The Story So Far...
Creator Adam F. Goldberg, who has been involved with things like Fanboys, Community and How to Train Your Dragon, summoned all his ‘80s-ness and channeled it through the prism of his own family (often seen in real home video footage at the end of the show) to create an iconic TV sitcom family, the Goldbergs. His stand-in, the youngest son, Adam, is something of the star of this ensemble comedy--a hilarious, yet warm-hearted series powered by ‘80s nostalgia that mostly avoids schmaltz. The show is entering its third season on the air, and has released one season on DVD, for which DVDTalk has a review.

The Show
With a strong first season in the books, The Goldbergs faced a number of questions following summer vacation, as it was yet to be seen if the show could keep up the successes of the premiere run, especially with the possibility that the ‘80s thing could get tired. As anyone who grew up during that time could tell you, the likelihood of that was nil, but it was still in the realm of the possible. Fortunately for Adam F. Goldberg's creation, the show has a two-pronged attack, seducing with offers of ‘80s-era excess and sneaking in heart-warming family-themed comedy, so it's not reliant . Murray (Garlin) and Beverly (McLendon-Covey) may have raised a trio of battlers in oldest daughter Erica (Hayley Orrantia), angry middle kid Barry (Troy Gentile) and baby-faced camcorder enthusiast Adam (Sean Giambrone), but in the end there's a lot of love between these five Philadelphians (especially from their "smother.")

Not unlike the first season, there are plenty of episodes built around in-fighting, whether it's a prank war between Barry and Adam, Barry and Erica teaming up (and living in a van) to take on their father's rules, or Barry and Adam trying to turn the tables on Erica by revealing her love of a certain famed ‘80s boy band. But more often than not it's the Goldbergs versus the world, particularly when Bev stands up for her little boy, be it against teachers, fellow parents or sometimes herself. Rationality often goes out the window, and the results are usually quite funny.

Despite the focus on conflict, growth is a big part of this season, much to Bev's chagrin, as she struggles with her children's approaching maturation. Adam's increasingly important connection to his classmate Dana is a core element of the season (with accompanying ups and downs), while Barry's obsession with Erica's best friend Lainey (AJ Michalka) offers a fun, goofy b-plot in several episodes. Even Murray gets in on growth, as the Goldbergs' gruff dad finds a find in Lainey's dad (played to awkward perfection by David Koechner.) However it's Erica who is positioned to change the most, as her future is waiting for her and will take her from the family sooner than anyone else. Her interest in a career music comes through in a number of quality vocal performances this season (not coincidentally followed by the release of several songs by Orrantia), setting up major conflict for this tight-knit group. 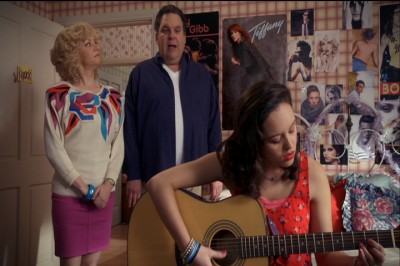 While there's a ton of talent throughout the line-up, with excellent chemistry between Garlin and McLendon-Covey, scene-stealing charisma from George Segal as Pops and a wealth of guest stars, including Ana Gasteyer, Rob Heubel, Michaela Watkins, Bryan Callen and Tim Meadows, the show lives and dies with Giambrone, the most natural child actor on TV in years. There's nothing cloying or artificial about his sweetness, while his timing is top-notch. The transition to adulthood is often hard for a child actor, but as the ease with which he moves from blunt comedy to heart-tugging drama shows, he's got the chops to have a nice long career. Here though, he's already outstanding and great fun to watch opposite just about any of his castmates, though any scene he shares with Segal is a blast.

Though the Goldbergs remain a family that yells as much as it loves, this season there seems to be more of a sense of positive resolution to most episodes; the kind of neat, we-learned-a-lesson wrap-up that had marked the final moments of Modern Family for years (until they mostly abandoned that this past season.) Though any fan wants the family to be happy and "victorious" in the end, these moralistic reflections (most obvious in Oswalt's voiceover) edge dangerously close to schmaltz (something the show avoided so well in the first season.) On the other hand, one of the the season finale's final moments with Adam, which caps off two years of character development, packs one heck of a punch for a sitcom, feeling like it was intended as a series finale if necessary (followed by a very disturbing tag.)

Just as it was in the first season (and apparently will be going forward), the series did an episode-length homage to a classic ‘80s film, in the self-explanatory "Barry Goldberg's Day Off." Just as was the case with the first-season's Goonies episode, it's not so much about making references and parodying famous parts of famous films, but showing how Adam connects with these films (and by extension his family.) That said, the show utilizes the source materials extremely well, re-creating plenty of well-known moments from John Hughes' film, and features a fantastic cameo from the original film. Watching this episode, and enjoying so many of the jokes about ‘80s icons like the Transformers, He-Man and more (most of which get a helpful intro in Oswalt's voiceover for any millenials watching) it's worth wondering if the show is as meaningful or entertaining for someone who didn't die a little inside when Optimus Prime fell. It probably isn't, but that nostalgia is simply delicious frosting on an already delightful cake. 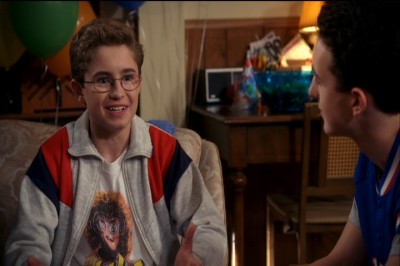 The DVDs
Packaged in a clear single-width keepcase with a two-sided cover (with an episode guide), the 23 first-season episodes of The Goldbergs are spread over three DVDs. Last season's awful deep hub has been replaced by a dual-hubbed tray. The discs have a static, anamorphic widescreen menu, with options to play all the episodes, select shows, adjust the subtitles and check out the extras. There are no audio options, though subtitles are available in English, English SDH and French.

The Quality
No real change in the visual quality from last season, and that's a good thing, since the show looks quite nice, with rich, well-saturated color (as only the ‘80s had), a high level of fine detail and solid black levels (there are a number of night scenes this season, and they look quite nice.) There are some source materials utilized, and they look appropriately lo-fi, but for the most part this is solid-looking set, with no noteable compression issues.

As with the visuals, the Dolby Digital 5.1 tracks are pretty much the same as the last time out, keeping dialogue clean and crisp in the center channel, while the surrounds deliver a bit of atmospherics to go with boosted ‘80s music, a key part of each episode. You're not going to find anything extravagant about the mix, but it's not the kind of show that needs it either.

The Extras
Disappointingly, commentaries have been jettisoned this time around and the featurettes are slimmer, but what's here is enjoyable. Like last season, there's a behind-the-scenes featurette featuring one of the stars, but this time there's a second as well. The first one, "On Location with Sean Giambrone" (9:40) follows the actor as he films scenes set at Veterans Stadium for "The Lost Boy." Interviews with Giambrone, several of the crew and his adorable mother brings mostly praise for the youngster, but also reveals his thoughts about acting and his experience as a child actor, as we hear from his on-set teacher and acting coach. If you didn't love this kid before, good luck avoiding it after this profile.

"On the Set with Wendi McLendon-Covey" (11:37) allows the family's mom to show the viewer around the main set and talk about her day, including her bungee chair and exercise routine. It captures McLendon-Covey sense of humor and authenticity quite well, making it a fine companion piece to last season's tour with Garlin.

The big ‘80s movie episode gets some spotlight in the 9:27 "Making ‘Barry Goldberg's Day Off", with interviews and on-set footage exploring the various scenes the show re-created from the film and the influence of Hughes and his creations. The cast also offers their suggestions for the next season's movie episode (personally, I would have selected Real Genius.)

We do get something new this time around, as there are 25 deleted scenes (running 13:20 in all) spread over the three discs. There's a mix of cut material (smartly removed to improve pacing, particularly in regard to one scene in the season finale, which could have easily ruined the ending) and extended moments. Among the more memorable entries are Adam acting like Hulk Hogan in class, Barry and Adam in a video store (which should be a regular setting for a kid like Adam), Erica and Beverly swapping places and Murray's employee Vic (McLendon-Covey's Reno 911! co-star Cedric Yardborough) revealing more of his Canadian heritage.

A few previews are included, and whoever was behind them has a sense of humor, since the first one is a trailer for Adam Goldberg's No Way Jose. (For those who don't know, this Adam Goldberg is not the creator of The Goldbergs, but rather the actor/director in the middle of a Twitter feud with Adam F. Goldberg. 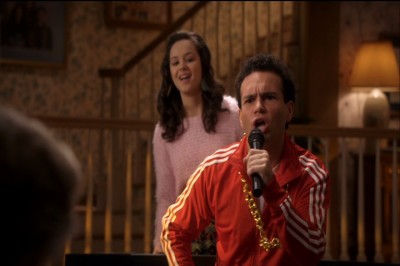 The Bottom Line
The frequently moralistic endings may not be everyone's cup of tea, nor might the ‘80s cultural touchstones found everywhere, but the performances and comedy are strong enough to overcome those biases, should you have them. Though the extras aren't as plentiful as last time, they are still worth checking out, and the quality is solid across the board. If you haven't watched before, you can jump in here, as it's the kind of feel-good show that doesn't require knowledge of any backstory.