Pound Puppies: Pick Of The Litter 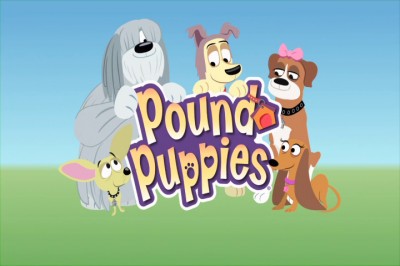 
The Story So Far...
Like its labelmate My Little Pony: Friendship is Magic, this version of Pound Puppies is a more modern version of an ‘80s cartoon based on a toy, in this case a line of sad-sack stuffed dogs. This new adaptation sets up the core dogs as a team whose mission is to find homes for puppies who end up at the pound. The series ran for three seasons on the HUB Network, and several home-video collections have been released. DVDTalk has a review of one of the previous releases.

The Show
Though I can't agree with my colleague Kurt Dahlke that Pound Puppies is better than My Little Pony: Friendship is Magic, it's certainly better than most would think at first glance, rising well above the label of a kids cartoon thanks to a fun tone, enjoyable characters and great voice performers, as the show blends moralistic storytelling with amusing pop-culture references and solid family-friendly comedy. This set offers a quintet of episodes from across the show's run (heavier on the final season), and smartly avoids any themes, which these collections never seem capable of maintaining.

The team, lead by Lucky, works to match puppies that are brought to their pound with their perfect human, through the help of their matching computer. (There's no explanation as to how the team stays in the same pound without either being adopted or…) Each episode follows a pretty set formula, as we meet the featured puppy (be it a lost circus performer or a celebrity lookalike), find out who their perfect person is and see how the two are brought together (always with some difficulty.) The teams that go out on the mission are varied to keep things fresh, so one episode Lucky and Cookie the Boxer will hit the road, while another sees Strudel the weiner dog on a solo quest. 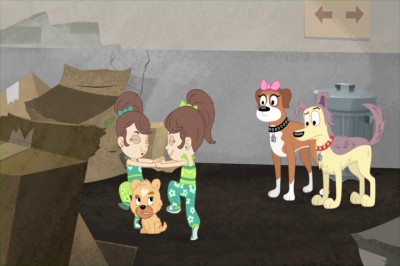 Though there are definitely morals to be found in each episode about the value of teamwork or the danger of judging someone based on appearance, the writing isn't limited by them. The show has a sense of humor that will appeal to the kids it's primarily aimed at, via the cute animals (including a crew of squirrel assistants), while the adults will get a kick out of some of the more subtle material, like the parodies and references (for instance, a Russian dog named Yakov starts every exclamation with "What a…") The characters of the dogs are fun, be it sarcastic leading-man Lucky, goofy Niblet the Sheepdog or the streetwise chihuahua Squirt. Personally, Strudel is the most enjoyable, mostly thanks to her short fuse and accent, which is punctuated by random German phrases. The only parts that don't entertain as much as the others are the three puppies who tag along in the later episodes, who seem to be inserted for a cuteness factor and to appeal more to younger viewers. Like similar "junior" cartoon characters (Scrappy-doo, the Cutie Mark Crusaders) they can wear out their welcome quickly.

The voice talent on this show is fantastic, whether you're talking about the main cast or the special guests. The main dogs were cast in part from outside the world of animation, with Will & Grace's Eric McCormick providing the team leader's voice, Community's Yvette Nicole Brown as tough Cookie and Michael Rappaport giving life to tiny Squirt. However, the other core character feature cartoon vets John DiMaggio (Niblet) and Alanna Ubach (Strudel), while guest stars include Rob Paulsen, Cree Summers, Grey DeLisle and Tom Kenny. Even the show's humans are big names, with Rene Auberjonois, M. Emmet Walsh and Betty White getting in on the fun. The recognition factor adds to the enjoyment, but their performances are impressive nonetheless.

Of the five episodes on this disc, they are mostly equal in their quality, with storylines about Strudel joining the circus, a dog that looks like a popular toy and a show-biz pup who wants to live a regular life, but "The Pups Who Loved Me" is easily the best, introducing Bondo, just Bondo, a super spy from London who shares a rivalry with Lucky. The episode hits all the classic spy tropes, including an evil villain (naturally, a cat) and has the most fun with translating the dog world into a human context (for instance, one of the villain's weapons is a doorbell, which causes the dogs to lose focus and bark uncontrollably.) It's that awareness and thoughtfulness in building out the characters and the rules of their world that makes the show better than most would give it credit for. 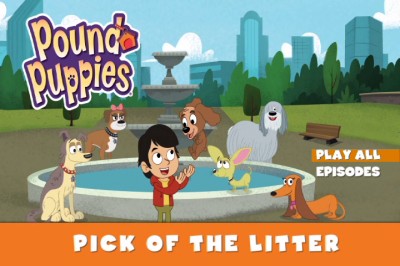 The DVD
Packaged in a white single-width keepcase, this DVD offers up five episodes. The disc has an animated, anamorphic widescreen menu, with options to play all the episodes or select shows. There are no audio options and no subtitles or closed captioning.

The Quality
Pound Puppies doesn't skimp on the colors, and the anamorphic widescreen transfers on these episodes are bright and vivid, without any noticeable issues. Everything looks nice and crisp and eye-catching, making it an excellent translation of what the show looks like on TV.

The Dolby Digital 5.1 tracks on this disc are solid, with nice, clear dialogue in the center speaker and some music in the side and rear speakers. There aren't big musical numbers in this show, so the opportunities for the surrounds to get some work are limited, but the presentation overall is quite good..

The Extras
There are absolutely zero extras. 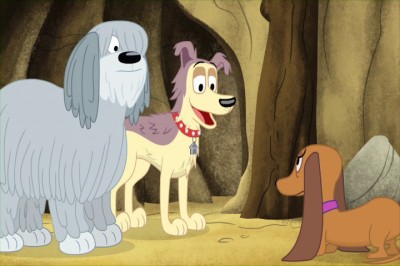 The Bottom Line
As an adult who enjoys watching My Little Pony: Friendship is Magic with my daughter, it's nice to know there's yet another option for us if we want to watch a cartoon that we both can enjoy. This release features a solid five episodes that are delivered in fine quality, but there are no extras, no added value is just not there. However, it is pretty inexpensive, so there are worst ways to get your Puppies fix.