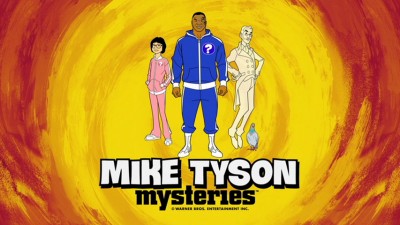 
The Show
Of the people most would have expected to star in an [adult swim] cartoon, retired heavyweight championship boxer Mike Tyson was likely quite low on the list, considering a host of reasons. That's probably why he works so well as the lead of Mike Tyson Mysteries, which puts Tyson, represented by a simple, face-tattooed caricature wearing a blue jumpsuit, into Scooby-Doo Mysteries-style adventures (and animation), an unlikely and successful pairing that feels like it should have been a part of TV Funhouse. The key is making Tyson the butt of the joke, because, as a wise man I can't remember once said, a guy who can beat you up can't make you laugh. But you can laugh at him.

Each episode, Mike is given a mission via his cadre of carrier pigeons to help anyone from author Cormac McCarthy (who is struggling with writer's block) to a werewolf with dating problems. Right off the bat, the show trafficks in the strange, whether it's Tyson believing that he's killing astronauts to him ending up on a real-estate reality show. Though Mike is the target of many jokes, with him showing uncharacteristic emotion and poking fun at his intelligence and inability to pronounce complex words, it's his team that makes most episodes really work. His adopted Korean daughter Yung Hee (Rachel Ramras) opens up Tyson's caring side, and gives the show a way to directly address his shortcomings, while the ghost of the Marquess of Queensberry (Community's Jim Rash) and a talking pigeon named Pigeon (Norm MacDonald) lend a mix of absurdity and filthiness to the proceedings. 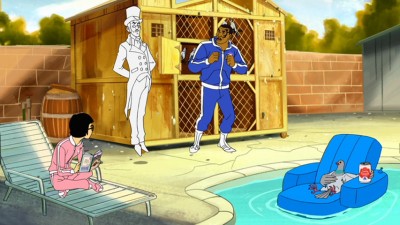 No particular episode stands out, which, when the entire season runs under two hours in length, is not the biggest issue, as it's not a series that's asking for a major investment in time. It all kind of blurs together, a mix of jokes about, among many other things, Asian strippers and gambling wizards, that's punctuated by Tyson's ridiculousness. After a while, it's almost worth watching simply to see what Tyson is going to do in his brief live-action appearance at the end of each episode, but the journey to that end is never boring.

Note: This release is labeled as "uncensored." This means that most of the language is presented unbleeped, though one episode sees the swears muted (perhaps the way it was recorded.) The two instances of pixelated nudity remain in place. 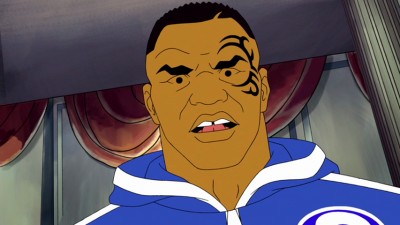 The Discs
The 10 episodes of Mike Tyson Mysteries' first season arrive on one DVD, which is packed in a standard keepcase, inside a slipcase that repeats the cover art. The disc has one of Warner Brothers' traditionally bland static anamorphic widescreen menus, with options to play all the episodes, select shows and adjust languages. There are no audio options, but subtitles are available in English SDH and French.

The Quality
The anamorphic widescreen transfers look very nice, making sure the show's vibrant colors shine bright, while the detail in the backgrounds makes the painted style stand out. Nothing is truly problematic about this presentation, though the black outlines in the animation often display some pixelation. Otherwise, this is a great-looking show.

The Dolby Digital 5.1 soundtracks are pretty standard for TV animation, using the surrounds to deliver the score, while the center channel handles the dialogue, which is a crisp and clean. There are some minor atmospheric effects in the sides and rear in some scenes, but you'll barely notice them, while bass isn't really a factor. That said, the show's fantastic theme music sounds terrific and strong. Overall, no areas of concern, but nothing stands out either.

The Extras
Nothing to be had here. 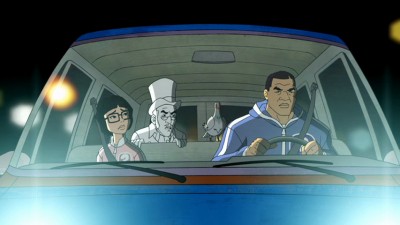 The Bottom Line
If you can get past the more distasteful aspects of the show's lead star, Mike Tyson Mysteries has a lot of good fun with his well-known public persona, smartly surrounding him with two massive comedy talents in Rash and MacDonald. The results are odd and often hilarious. The disc looks and sounds solid, but offers nothing in terms of bonus content, so your need to own it is limited, however it's well worth a look if you haven't seen it before.