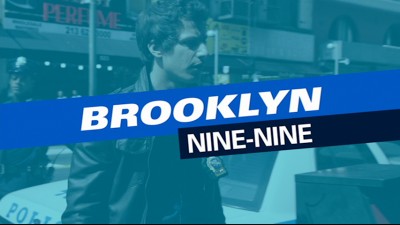 
The Story So Far...
The detectives working the beat of Brooklyn's ninety-ninth precinct, under the lead of their captain Raymond Holt (Andre Braugher), are good cops, but inherently goofy--each with their own unique quirks, especially the show's star, Jake Peralta (Andy Samberg.) Blending stories from the cops' work and personal lives, Brooklyn Nine-Nine has proven itself to be a fine and quite funny follow-up from The Office and Parks and Recreation alumni Dan Goor and Mike Schur. The show is entering its third season, and has had one DVD release to date. DVDTalk has a review.

The Show
After spending the first season establishing the world of the Nine-Nine and laying down some relationship pipe in intertwining the characters, the last episode of the year saw Jake leave the force and go rogue by joining an organized crime family. That storyline goes away quickly though at the top of season two, allowing the show to get back down to monkey business, which involves lots of work drama, fun case work and interpersonal conflict. That last one is where the show changed a bit from the first season, as the personal side took more of a front seat (though the police work never strayed too far away.)

Naturally, Jake's relationships take center stage, starting with the tension he shares with fellow detective, the book-smart Amy Santiago (Melissa Fumero), which goes through several will-they-won't-they rounds, complicated by her pilsner-loving boyfriend Teddy (Kyle Bornheimer, who's been playing a somewhat similar role on the great Playing House.) It seems like Jake can't help but intermingle his personal and professional life, accidentally dating a defense attorney named Sophia (Eva Longoria), which has plenty of ramifications for him (since she's the enemy), some of which play out over the course of the season. Though it's classic sitcom in how it plays out, the Jake/Amy dynamic works for the show, mainly because neither is super confident and the discomfort works well for the characters, activating their comedic defense mechanisms. Throw in an appearance by his long-absent pilot father (Bradley Whitford) and this season is a crash course in what makes Jake tick. 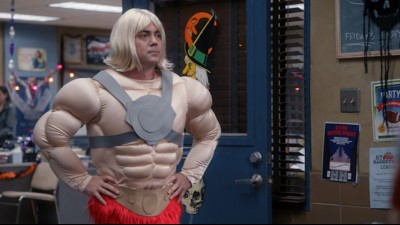 Other pairings become key this season as well, including an usual coupling between brash assistant Gina (Chelsea Peretti) and hopeless schlub detective Charles (Joe Lo Truglio), which eventually brings Gina's mom (Sandra Bernhardt) and Charles' dad (Stephen Root) together, setting up more discomfort than 10 Jake and Amys. Charles' naive, romantic enthusiasm and Gina's brutal cynicism are a great match comedically, and result in some terrific exchanges. As cartoonish as Charles' personality can be at times, with the way he idolizes Jake and involves himself with weird, sad hobbies, the show could get mired in the negative without his energy. Meanwhile, the reclusive Rosa (Stephanie Beatriz) opens up a bit and begins dating Holt's nephew Marcus (Nick Cannon.) It could have been a mistake to change up such a defined character so early, but she remains tough as nails and it's fun to watch her try to balance that aspect of her personality with trying to date.

Speaking of Holt, he's got plenty of struggles of his own, mainly thanks to the presence of his superior, Wuntch, played with evil gusto by Kyra Sedgwick. The pair's history is parceled out as they clash over Holt's team, his very presence and his new task force, aimed at getting a new drug called gigglepig off the streets (which is where much of this season's detective work is focused.) That sets up a cliffhanger at the end of the season that promises some potential greatness in season three. Though Braugher's emotionless performance is a key part of what makes his interactions with his overly emotional team so much fun, he gets to cut loose ever so slightly thank to his feud with Wuntch, which is almost as enjoyable. An episode that gets out of the office and sends the straight-laced captain on vacation with his party-focused crew may be the best example of how their conflicting personalities work well for comedy.

Though there's some excellent writing and the integration of the cases and personal material is great, the show's ensemble cast is it's biggest strength, especially Terry Crews' incredible work as Holt's second-in-command, a complex hulk of a man who wants everyone to do the right thing, and will go out of his way to help his team, be it trying to help Amy quit smoking, rescue Gina from depression, protect Jake from himself or heal a sick, defensive Rosa. If you need a guaranteed laugh in a moment, Crews is likely to deliver it, hiding terrific timing under his intimidating physicality. The main cast is so good that the show doesn't rely much on guest stars, but when they bring people in they tend to integrate well, be it Longoria (a perfect fit with Samberg), Ed Helms as a delusional postal inspector, Craig Robinson making a return engagement as Jake's nemesis Doug Judy the Pontiac Bandit, Nick Kroll playing an egotistical Homeland Security agent or Chris Parnell, who is welcome in basically anything. It would be wrong not mention Marc Evan Jackson though, who has a small occasional role as Holt's husband Kevin, but is so good in every scene he's in, particularly when he has to work with Gina and Jake to figure out what's bothering Holt, resulting in one of the best trios of the season. 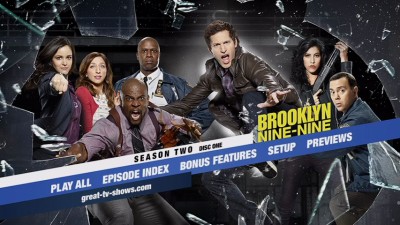 The DVDs
The 23 episodes of the second season of Brooklyn Nine-Nine are spread over three DVDs, which arrive in a clear, single-width keepcase with a dual-hubbed tray, a two-sided cover with an episode guide and an embossed slipcover. The discs have static anamorphic widescreen menus (which loop the show's theme song) with options to play all the episodes, select shows, check out extras and adjust the set-up. There are no audio options, but subtitles are available in English SDH.

The Quality
These anamorphic widescreen transfers haven't changed much at all from last time around, which is fine, since Brooklyn Nine-Nine isn't glossy, resulting in appropriate color and a clean, well-defined image that shows no signs of digital distractions. It doesn't quite look like the HD broadcasts, coming in a touch softer, but it doesn't look problematic either.

Brooklyn Nine-Nine, like most sitcoms, is focused on dialogue, though music, atmospherics and sound effects do crop up more than on most such shows due to the nature of detective work. The Dolby Digital 5.1 tracks here handle the work well, keeping the voices in the center channel, which the surrounds build out the soundfield a bit, offering some good separation between elements. The low-end isn't particularly obvious in these shows (with some minor exceptions.)

The Extras
After coming up far short with extras last time around, the discs' producers were going for some sort of medal in the Disappointment Olympics. All you get are four measly deleted scenes which add up to a grand total of 1:38 of additional footage, including a few cutaways which were likely removed for pacing, though only one was all that funny. When compared to the bonus content of Goor and Schur's previous series, it's just sad. 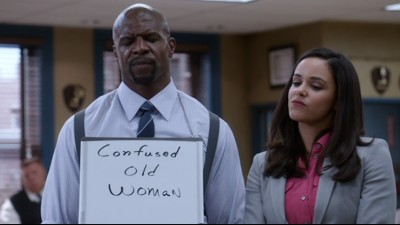 The Bottom Line
Brooklyn Nine-Nine remains a strong ensemble comedy in its second season, transitioning a bit more into the characters' personal lives and intertwining their lives more, but the regular connection with the police work keeps the show unique amongst its workplace comedy peers, offering as much story as it does laughs. The set looks and sounds fine, but it's a crime that the extras are so weak. Owning this set is mainly for those who want to revisit the episodes repeated, because you're not getting much of anything beyond that.