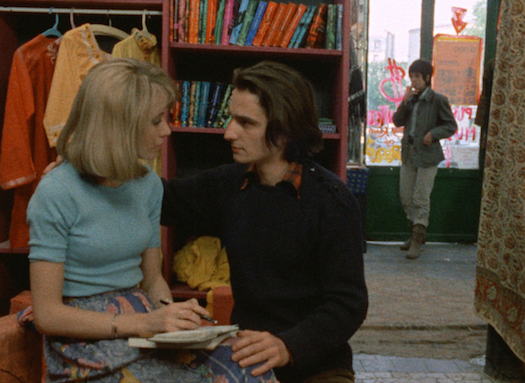 Fans of arthouse cinema already have their first must-own release of the new year. Long unavailable in its uncut form -- and never released on American home video in any form! -- Jacques Rivette's 13-hour magnum opus Out 1 (shot in 1970) arrives in a beautifully restored limited-edition Blu-ray/DVD set. The set also includes the theatrically released 4 1/2-hour re-edit of the film, called Out 1: Spectre (1974), and a nearly two-hour making-of documentary that details not only the process of unscripted creation but also the tumultuous road to release.

As with many films of the French New Wave, Out 1 features a relatively young cast of characters grappling with politics, art, and love, all while smoking incessantly and trafficking in literary references that most modern viewers without a classical education aren't likely to grasp. Shot two years after the student uprising of May 1968, Out 1 is probably the earliest film to effectively portray French society's hippie hangover, when a bright, shining moment of potential revolution has passed largely unrealized and things have essentially gone back to normal. In this vein, the film toys with what it means to be part of a collaborative community versus being a loner, and the result is that neither situation is all it's cracked up to be.

Before the scope of this improvisation-based film expands and allows its couple-dozen characters to meet up and bounce off of each other, Out 1 introduces four main threads: the first involves an experimental theater group, led by Lili (Michèle Moretti), staging scenes from the Aeschylus play Seven Against Thebes; the second involves a seemingly unrelated experimental theater group, led by Thomas (Moonraker's Michael Lonsdale), working on improvisational exercises in preparation for their own Aeschylus production, Prometheus Bound (if the independent existence of both of these groups seems implausible, the film eventually explains all -- several hours down the line); the third involves a young deaf-mute named Colin (Jean-Pierre Léaud), who hustles cafe patrons for spare francs by handing them Balzac passages and then poorly playing the harmonica at them loudly; and the fourth involves another hustler, Frédérique (Juliet Berto), who uses her feminine wiles to flirt with various men and then separate them from their money when they're not looking.

The film is divided into 8 episodes of roughly 75 to 110 minutes each; the first episode sets up these characters and scenarios but then barely even hints at any sort of narrative to come. Instead, we are immersed in the creative process, watching one theatrical group doing warm-ups and working on the choreography of an oddly complicated verbal exchange, while the other group does a mostly wordless act-out as primal, child-like beings (anyone who remembers Lars von Trier's The Idiots might suspect the Danish filmmaker swiped an idea or two from this sequence). Later, we watch the actors give feedback on their experiences during the improv. The immense amount of screen time devoted to these exercises and debriefing sessions is not an aberration; sequences like these continue to appear throughout most of the film.

Rivette is clearly fascinated by the work that goes into creating, as evidenced by some of his other films like Paris Belongs to Us and La Belle Noiseuse. In fact, if you count both the textual and meta-textual levels, Out 1 is concerned entirely with examining how a performance is brought into existence. Rivette often counterpoints those long rehearsal sequences with shorter, punchier scenes that are more typical of a narrative film, but he just as often lets conversations play in unbroken takes for minutes on end. Since the real-life actors are literally making up their characters and dialogue as they go along, Rivette takes advantage of these long takes to allow himself and the viewing audience (and no doubt the actors too) the chance to witness the creation of a performance. 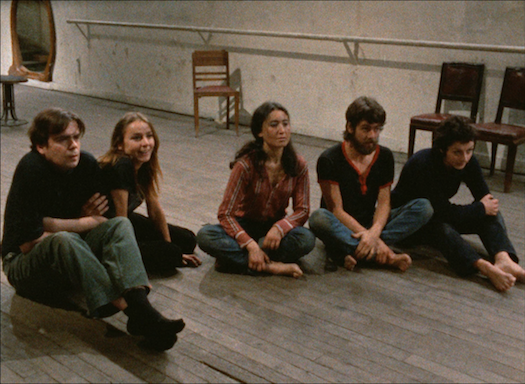 After the film leisurely clears its throat, the main story, as it is, revolves largely around a secret society called the Thirteen (inspired by a conspiracy described in the work of Balzac, because, as I said before, this is a French New Wave movie). Colin receives mysterious messages that inspire him to locate and unmask the Thirteen. His amateur detective work leads him to a used book and record shop called the Corner of Chance. The shop is run by Pauline (Bulle Ogier), who has made the store into a kind of local salon/hang-out spot (perfect for conspiring!). Against his better judgment, Colin falls for Pauline shortly after eating too much of her rhubarb jam. Meanwhile, Frédérique stumbles across some letters which discuss the actions of the Thirteen that she hopes to use for blackmail. The fumbling attempts of both Colin and Pauline to penetrate the Thirteen inspires many conversations between people who may or may not be part of the group, which may or may not be working toward something revolutionary, and which may or may not even be real.

The mystery of the Thirteen offers the audience a compelling reason to keep watching through all eight episodes, but the performances are far more memorable. Lonsdale shows his talent for quiet treachery as he beds two different women and is even so bold as to try to get them to join him in a threesome. Berto displays an adolescent chutzpah, both in Frédérique's quiet moments where she plays games and pretends to have a shoot-out with herself and also in her bold and sometimes badly thought-out cons (one backfired pick-up that leads to violence is harrowing). Léaud is the perfect obsessed quixotic quester, as evidenced by an indelible scene where he is followed for several blocks by a pair of young boys on the street (not actors) while he is wrapped up in a potentially coded literary passage.

Rivette supposedly divided his massive work into eight feature-length episodes in the hopes that maybe the project would have some commercial value as a TV serial. French TV didn't bite, and it took two decades before German TV broadcast the film. Curators of the few repertory screenings of the complete Out 1 (subtitled Noli Me Tangere ["Don't touch me" in Latin] to distinguish it from the Spectre cut) have chosen to show the film in either 2- or 4-episode chunks per day. In my humble estimation, this is the preferred way to approach this film. Out 1 is a more challenging binge-watch than your typical modern TV series, but once you get into its rhythmic flow, it's much easier to stick with the film's sensibility in 3- or even 6-hour doses than it is to try to disconnect and re-sync-up over an extended period of time.

As Carlotta Films' packaging trumpets, Out 1 is the holy grail of the French New Wave. Its legend has been firmly established because so few have seen it. Now that your average joe with a C-note to spare can finally take a look at the thing, does it live it up to the hype? It most certainly does. Out 1 is messy, brilliant, tedious, and monumental. 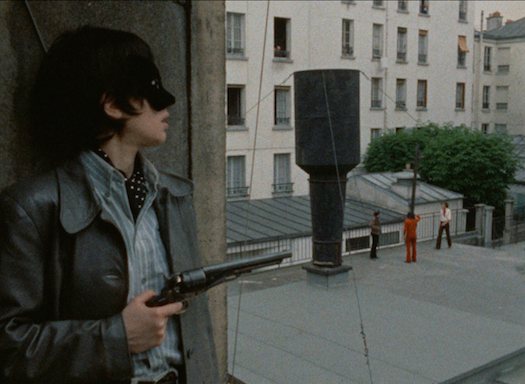 The Blu-ray
Out 1 comes in an attractive box set that includes the 13-hour Noli Me Tangere cut of the film on 4 Blu-rays and 4 DVDs, the 4 1/2-hour Spectre cut (see below) on 1 Blu-ray and 2 DVDs, and the making-of documentary The Mysteries of Paris on 1 Blu-ray and 1 DVD. The package also includes a bilingual 120-page book that includes a synopsis, interview excerpts, an in-depth essay by critic Jonathan Rosenbaum, great B&W stills, and more.

The Video:
Much like Carlotta's superlative release of Mauvais Sang a year ago, this AVC-encoded 1080p 1.37:1 presentation, sourced from a 2K restoration of the original 16mm film, is perfect. The look of the film material is sumptuous and satisfying, even with its inherent graininess and the frequent stray hairs "in the gate" at the bottom of the frame. The colors are rich and inviting. The blacks and contrast look dead-on. No signs of damage or dirt. No noticeable digital compression issues.

The Audio:
For English-speaking viewers, the disc offers only the main LPCM French mono soundtrack, with optional English subtitles. There are a few trouble spots that are muffled or distorted throughout the 13 hours, but these are likely inherent to the original recordings, as there seems to be little or no ADR work. In one scene, portions of a character's dialogue are played in reverse, but this is one of the very few post-production effects that seem to have been imposed upon the audio. Considering its documentary-like "naked"-ness, this digital remastering of the soundtrack sounds accurate. For French-speaking viewers, the disc also offers a French Descriptive Video Service audio track for the blind and a French SDH track.

(HD, 4:24:11) - A fascinating and fitfully satisfying re-edit of material from Out 1 that was given a brief theatrical run. Rather than being just a "shorter" version of the original Out 1, this distillation is more formally challenging, thanks to its constant fragmentation and displacement of time, location, and character. In fact, it plays kind of like a hyper-extended trailer for the long version. I wonder how different my reaction would have been if I had watched this first, but mostly I found myself reflecting on the original as I watched it, trying to piece back together where all these fragments originated.

Final Thoughts:
After nearly half a century, a lost masterpiece of the French New Wave has finally made its way to American home video with an unbeatable transfer and a solid pair of supplements. DVD Talk Collector Series 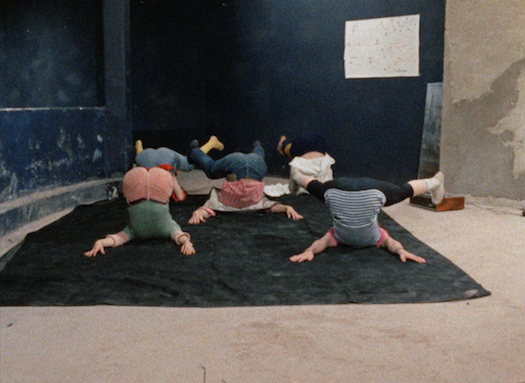