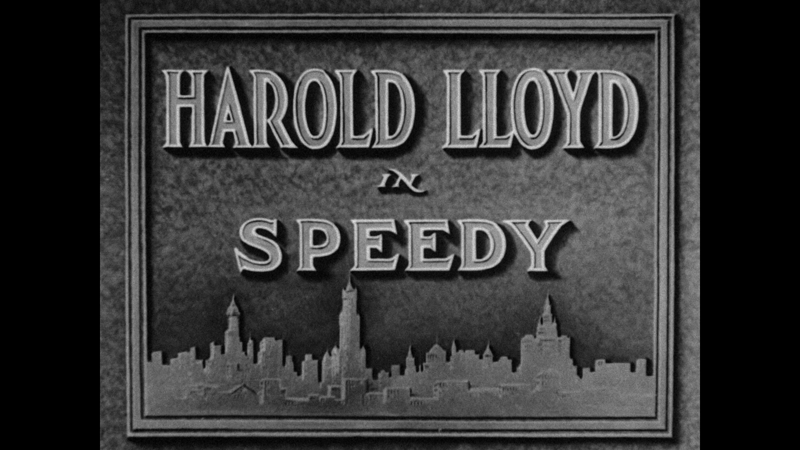 
The Movie
In his previous exploits in the Criterion Collection, silent-film funnyman Harold Lloyd thrilled audiences by hanging off the side of a building (Safety Last!) and hitting the gridiron (The Freshman), and in Speedy, his last-ever silent film, he gives it a try in a new locale, New York City, where he has some fun at Coney Island, gets in a street brawl and experiences a massive chase, all with the comic edge that made him a superstar of his era, as his classic "Glasses" character (named for his iconic round glasses) unknowingly walks a very fine line, falling into and out of good and bad luck as he goes about his day.

Of course, there's a girl involved, as there always is in a Glasses film. In this case, Jane (Ann Christy) is the granddaughter of the driver of New York's last horse-powered trolley. He's concerned because her boyfriend Speedy (Lloyd) has trouble holding onto a job, due to his obsession with the Yankees (as evidenced by some great scenes featuring him failing at various careers, including a terrific montage of him driving a taxi and being generally bad at it.) He's got other trouble though, because the railroad wants to buy him out in order to merge local tracks, and his holdout keeps them from completing their plan. This is where Speedy can be his most useful, because in order to give Pops a chance to get a deal, Speedy has to keep the trolley on the rails and out of the hands of gangsters looking to shut the line down. 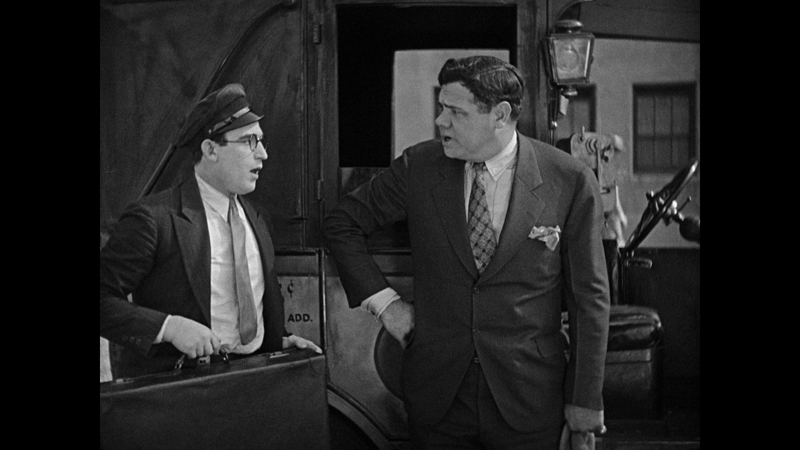 Speedy is a classic Glasses character, often quite unaware of how he's managing his successes,, though still more than capable of pulling his backside out of the fire. It's that sense of flying by the seat of his pants that makes his adventures so thrilling, because while you may expect he'll get through a challenge, how it happens is never so obvious. Heck, at one point, he experiences a rather shocking failure (the result of a filming cock-up) that comes as a complete surprise, while also allowing him to show more of his trademark innovation. Without a doubt, that unpredictability makes the film's signature chase scene (and--to a lesser degree--his whiplash-inducing cab ride with the real Babe Ruth) a perfect showcase for his talents, as is an epic street fight that's one of the most enjoyable displays of violence ever committed to film.

It's not all a thrill ride though, as the large chunk of the film dedicated to Speedy and Jane's trip to Coney Island will attest to. Between the silliness of the subway ride, with the tight confines allowing room for pranks, and the frivolity of Luna Park's rides and games, as well as Speedy's attempts to keep his newly purchased "ice cream" suit free of stains, there's plenty of opportunities for light-hearted physical comedy, small (but effective) gags and the development of fondness for the two characters, which pays off over the course of the rest of the film. Compartmentalizing the first half of the film into establishing the story and then the heroes sounds like it could padding the film out a bit, but without words, it's probably the cleanest way it could be done, and in the end, you don't mind the time you spend with the couple (even if Jane does recede for most of the movie.) In the end, Speedy is just what you want out of a Lloyd comedy: a fine goodbye to a legendary character. 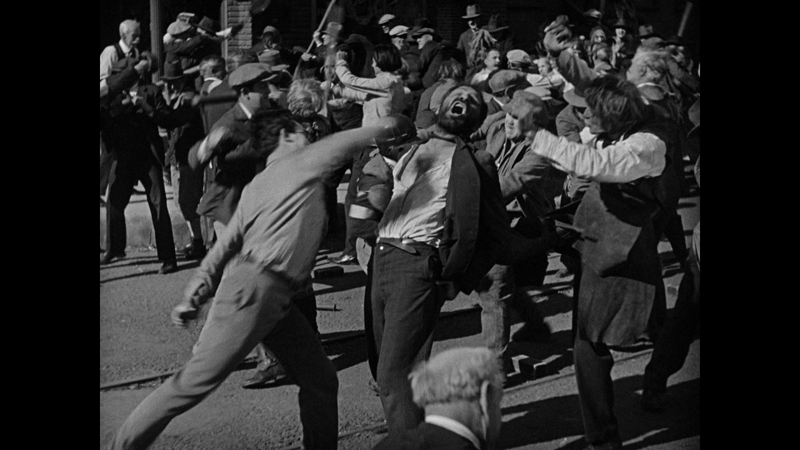 The Disc
Speedy arrives on one Blu-Ray disc, in a clear, almost double-width Blu-ray keepcase with a double-sided cover featuring a photo of Coney Island on the inside. The disc, featuring the gloriously minimalist Criterion menu design, gives the choice to watch the film, navigate the timeline, select scenes, and check out the special features. There are no audio options, and no subtitles or closed captioning (naturally.)

The Quality
The 1.33:1, AVC-encoded 1080p transfer here comes from a 4K digital restoration done by the UCLA Film & Television Archive, mixing original elements from positives and negatives. The results are fantastic, with a crisp image that boasts impressive fine detail and a consistent layer of grain. Contrast and black levels are spot-on throughout as well, while the two tinted scenes look appropriately and consistently saturated. Some occasional jittering and jump cuts are evident, and early establishing shots aren't as pristine as the rest of the film, but overall, this presentation is simply gorgeous, with little in terms of obvious dirt or damage.

The Carl Davis score, restored from a 1992 track, is presented in a LPCM 2.0 track, and it sounds great, with big bold instrumentals that serve to accentuate the on-screen action and add to the atmosphere, often acting alongside the performers, whether it's the energetic underscore to a big chase scene or it's something like the stereotypical Asian sound the score takes on when a Chinese launderer takes the screen. Often the score will step in to act as foley sound, providing sound effects, via elements like wood-block percussion, as is heard during the big brawl. A great track all around.

The Extras
The extras are reasonably deep, but in comparison to the packages that accompanied Safety Last! and The Freshman, they seem somewhat slimmer. It's just likely the reality that comes with being the third Lloyd film out of the Criterion chute, so there's just less ephemera left lying around. The supplements kick off with a new commentary from New York Film Forum Director of Repertory Programming Bruce Goldstein and Turner Classic Movies' Director of Program Production, Scott McGee. The duo pair well, sharing an easy rapport, as they discuss the people involved and details of the production, along with plenty of info on the locations and the era. Though pretty tightly scripted and loaded with info, Goldstein and McGee have the right personalities to keep it from being dry.

Goldstein returns for In the Footsteps of Speedy (31:05), acting as a guide to a number of the locations around New York City seen in the film. Our narrator deftly explains how footage from two coasts were blended to create scenes, how to identify the real New York and the challenges the filmmakers faced in shooting on location. Making fine use of maps, archival photos and current footage of the locations, while telling stories about the city and the production, it's a fantastic look at old New York, through the prism of Lloyd's film.

"Babe Ruth" (40:24) offers a collection of various newsreel footage from UCLA's archives, each piece introduced by Ohio State's David Filipi, who offers context and background. There's plenty of very interesting material here, including clips of Ruth playing in Japan and opportunities to hear him speak at some length, so this will be worth checking out for history buffs, fans of baseball antiquity and admirers of the Bambino.

There's more from Goldstein (thankfully) in the 4:24 "Narrated Stills: Deleted Scenes," as the talks about moments that were removed on the way to the final cut of Speedy via a set of test screenings. Goldstein attempts to put still photos into place in the film and explain what was (or might be) happening in those excised scenes. The best part is the look at the rather smart "Lafograph", the chart Lloyd and his team used to analyze the audience's reaction in making their editing decisions.

Lloyd's granddaughter Suzanne steps in for "Home Movies", a 17:45 collection of personal footage from the time of the making of Speedy. Lots of cute stuff here, including babies and dogs, but of course the focus is getting to see Lloyd in his off-time, clowning it up with the younger members of his family. The archival footage and Suzanne Lloyd's informative narration makes it a treat for aficionados of the actor.

As with previous Lloyd releases, Criterion has used the main feature as reason to dig into the archives, where they've unearthed a 1919 Hal Roach production,Bumping Into Broadway (25:51), the first two-reel short starring the Glasses character, with Lloyd starring opposite Bebe Daniels. Lloyd is a would-be playwright, while Daniels is a would-be Broadway dancer. Their money troubles lead to problems in the boarding house they live in and the underground casino Glasses follows the the Girl to, which sets up a pair of amazing multi-level chase sequences, with the kind of high-speed physicality that you'd expect from a wire-fu movie, some of the best Lloyd ever put on film.

Along with the usual details about the release, the 12-page fold-out pamphlet includes some great still images and an essay about Lloyd from critic (and former professor at my alma mater, Hofstra University) Phillip Lopate, in which he examines Speedy as part of Lloyd's canon and as part of what made him different from the characters of Chaplin and Keaton. 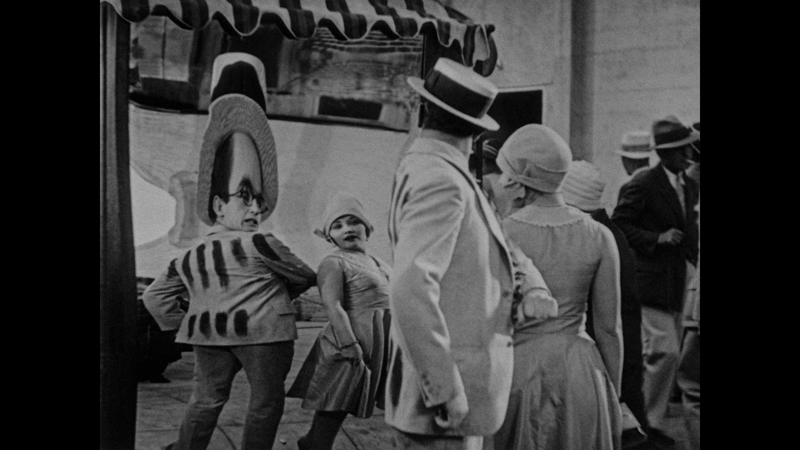 The Bottom Line
A third dip into the Lloyd canon brings the actor's last silent work to the Criterion Collection--the action-packed Speedy, a film that lacks some of the innovation of previous outings, but makes up for it with pure adrenaline and the unique New York setting, while still maintaining Lloyd's clever, crowd-pleasing sense of humor. The presentation is just as good as the others that entered the Collection before it, while the extras are varied, informative and entertaining, if a bit light on the odds and ends the previous releases offered (though the short included in amazing.) For Lloyd fans, it's a must have, even if only for the two films it brings to the party, while the archival and historical bonus makes it all the more intriguing to own.