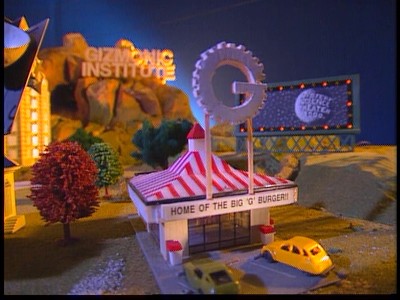 Anyone up for some leftover turkey? Four more episodes of Mystery Science Theater 3000 have arrived on durable, re-watchable physical media with volume XXXIV in Shout Factory's long-running series. For this particular multi-DVD set, Shout have gone international - American International, that is. Not only do all four episodes riff on grade-z movies from the famous cinematic teensploitation factory of the '50s, '60s and '70s, the set includes a nice, brand new feature-length documentary on the studio's history with contributions from Roger Corman and other insiders.

It's inevitable that there would be an AIP-centric MST3k box set - other than Japanese monsters and Italian sword-and-sandal flicks, the grade-Z teen horror and campy creature features pumped out by Corman and company would provide the most eminently riffable material for Joel, Mike, Tom Servo and Crow. The four features lampooned here date from 1956-58, making it more consistent than other MST3k sets. Additionally, the episodes come from just two seasons, with Joel fronting two scrappy autumn 1991 outings while Mike hosts the more assured (but less spontaneous) episodes that aired in spring 1997 on cable's Sci-Fi Channel.

While MST3k nuts could likely make a nifty spreadsheet pointing out the differences between vintage '91 Joel and '97 Mike on this set, I'll just go right ahead and plunge into the relative merits of each one. Without further ado, here are the four episodes included on Mystery Science Theater 3000: Volume XXXIV:

Viking Women Vs. the Sea Serpent
Episode #317; October 26, 1991.
This is a classic Joel-era MST3k with hysterical, consistent riffing on a lampoon-worthy film (actually, two - they also squeeze in a campy 1950s educational short, The Home Economics Story). The guys get a lot of mileage from this ambitious yet so wrongly conceived epic-wannabe from Roger Corman, released under a marquee-crowding full title of The Saga of the Viking Women and their Voyage to the Waters of the Great Sea Serpent. This ridiculous teen romp involves a group of lovely Scandinavian-by-way-of-L.A. young ladies, stranded on an island after most of their men went missing at sea. Deciding to go after them in their own homemade Viking vessel, they and a male stowaway (whom Joel and the bots dub "Todd") encounter a rubbery sea serpent. Their vessel sunk by the beast, the surviving blonde beauties wash ashore onto another island inhabited by a savage, warlike tribe known as the Grimlots. There, they learn that the Grimlots captured the missing Viking men for torture - will they have the strength to free the men and escape?

Preceding the movie, this episode has Joel, Crow and Tom riffing on The Home Economics Story, a weirdly sexist and patronizing educational short from 1951. This segment was previously released on DVD way back in 2003 on Volume 2, although it's worth revisiting to see it in the context of the episode it comes from - Joel, Crow and Servo truly are at peak form here. Skits in this episode find Joel obsessed with waffles, eventually seducing the robots to their buttery, sweet spell. 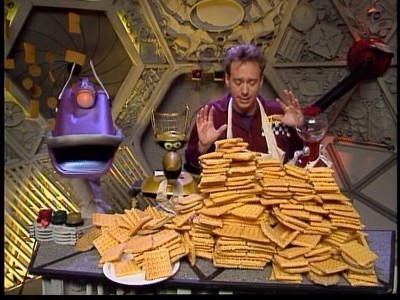 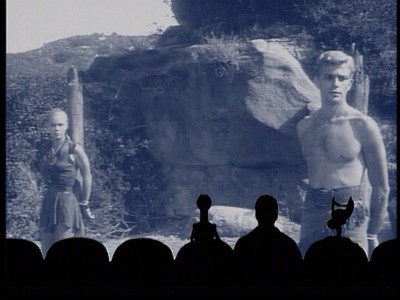 War of the Colossal Beast
Episode #319; November 30, 1991.
What's a girl to do when her giant, deformed, diaper-clad brother's gone on another rampage? 1958's War of the Colossal Beast was director Bert I. Gordon's shoddy sequel to The Amazing Colossal Man, a plodding, silly flick that naturally turns out to be comedy gold for Joel and the robots. The lethargic, radioactivity-enhanced Glenn Manning (Dean Parkin) has survived the first film and is found hiding out in the rocky mountains of Mexico. Army major Mark Baird (Roger Pace) heads up efforts to contain the marauding man, all the while carrying out the simultaneous operation: Flirty Dude maneuver with Glenn's concerned sis, Joyce (Sally Fraser). While the riffing isn't as uproarious as the short prededing it (see below), Joel and crew have a grand time with this ridiculous setup, deservedly mocking Bert I. Gordon's deficiencies all the way (for a cheesy monster movie, the acting is pretty decent).

Preceding the film is one of the funniest-ever shorts the MST3k guys ever tackled: Mr. B-Natural, an über-perky, indescribably strange educational short intent on getting '50s kiddies interested in taking up a musical instrument. Most of the riffing centers on the character of Mr. B-Natural, memorably, unnervingly embodied by actress Betty Luster as (in the words of the box) "an androgynous pixie." After the short, Joel moderates a point-counterpoint debate with Crow and Servo discussing Mr. B's gender identity. 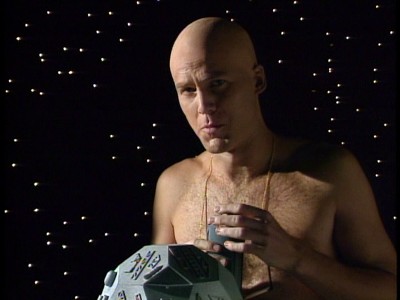 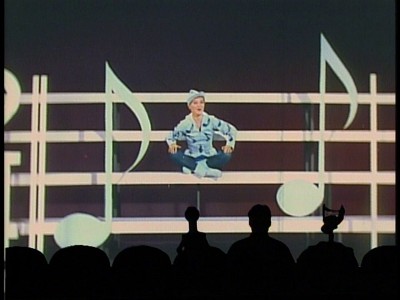 The Undead
Episode #806; March 8, 1997.
And then there's Mike - Nelson and the 'bots have a field day with this ridiculous, shoddy thriller, an awkward marriage of probing psychological drama and Ye Olde Renaissance Faire theatrics. This Roger Corman opus concerns a psychic (Val Dufour) and a professor (Maurice Manson) who engage a cinch-waisted hooker named Diana (Pamela Duncan) in a hypnotizing session. They uncover Diana's past life as a winsome medieval woman, Helene, dogged by accusations of witchcraft. In the marathon hypno-session, Helene encounters a singing grave-digger, a wooden love interest, a busty, shape-shifting witch (Allison Hayes of Attack of the 50-Foot Woman), and a creepy little imp (Billy Barty). The longer Diana regresses, however, the more danger she poses of causing a disruption in history, so the psychic finds a way to enter Helene's world to bring Diana back to the here-and-now. The source material has more than enough incompetence and weirdness to fuel a good MST3k. Despite having a suprisingly dull movie to deal with, Mike and the others don't disappoint with their commentary on the crappy acting, shoddy sets and laughable special effects.

Skits? Not as funny this time around - Tom Servo's superior intellect allows him to join the Observer in a select club of brain-keepers, while Mike and crew are visited by a shape-shifting witch similar to the one seen in The Undead. In a savagely funny bit, Mike, Crow and Servo mock Leonard Maltin's generous three-star review of this piece of junk.

Memorable lines: "Completely devoid of internal organs!" (Diana in an impossibly tight belt); "Thank you. Mr. Zebub."; "His response to the film is just like ours." (shot of dozing psychic); "The June Taylor corpses!" (trio of undead dancing women); "Uh, excuse me, hello? I'm looking for a tuffet." (fake spider descends onto a witch's head). 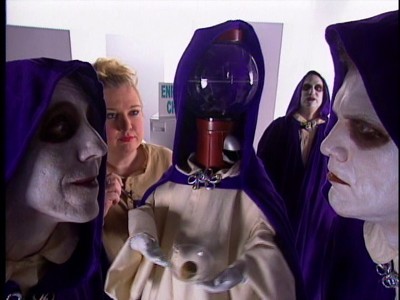 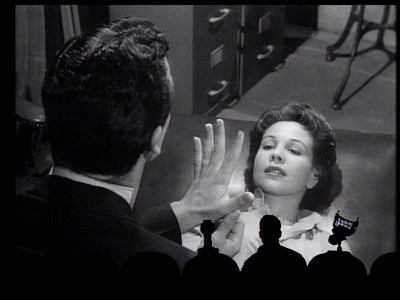 The She-Creature
Episode #808; April 5, 1997.
The riffing of Mike and the bots comes at a brisk pace for the plodding The She-Creature, an inept 1956 monster movie involving an evil hypnotist and his lovely yet brain-dead assistant. Producer Samuel Z. Arkoff actually got an interesting cast to do this one, including fading stars Chester Morris and Tom Conway, while the story was intriguing enough to make me tune out the riffing from time to time to figure out what's going on. Stone-cold serious Morris is Dr. Carlo Lombardi, a seedy carnival show hypnotist whose amazing mind-control abilities with the beautiful Andrea (Marla English, sort of a tawdry '50s B-Vivien Leigh) come to the attention of wealthy patron Timothy Chappel (Conway). Trouble is, Dr. Lombardi's act has the murderous side effect of conjuring a hideous lady sea-demon up from the sea, intent on taking deadly revenge against Lombardi's enemies. A skeptical, mumble-mouthed doctor (Lance Fuller) is on hand in an attempt to debunk Dr. Lombardi, ultimately saving Andrea from his hypno-control. As with many drive-in features of the day, the monster shows up all too briefly in this otherwise interminable, shoddy endurance test of a movie.

While the Mike-era MST3ks tended to do better on monumentally awful flicks like Space Mutiny or Pumaman, their overly rehearsed but hilarious riffing makes this one a pretty good outing. Skits include a great bit with Mike reading various scripts with the same emotionless non-brio as actor Lance Fuller, with Crow and Servo coaching him on. Elsewhere, Crow demonstrates the "Tickle Me Carlo Lombardi" doll with Mike.

Memorable lines: "Who am I trying to kid? I'm not a She-Creature, I'm a She-Loser."; "Look deep into my eyebags." (Chester Morris in an intense moment); "Oregano?" (Cockney-accented pronunciation of the word "space"); "They tried to light it, but this movie is like a super-absorbent black hole." 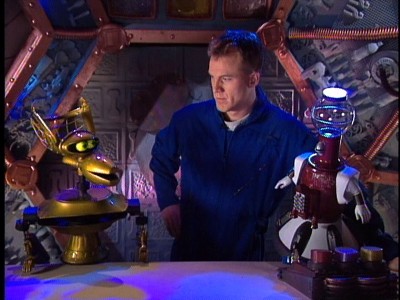 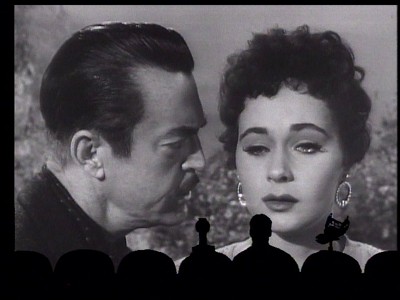 Visually, all four episodes sport the kind of glassy, overly sharpened picture one would expect with vintage videotape-recorded TV productions. Even on the earliest episodes, the image is relatively sharp and wobble-free. The later Mike-hosted episodes fare the best visually, while the Joel episodes from 1991 have a slightly depreciated, less detailed picture. Color is over-saturated yet fine on all four episodes.

A simple stereo mix, pleasant if unremarkable, is supplied with all four episodes. There are not a lot of flaws with the soundtrack, even in the earliest episodes. No subtitles options are provided.

It Was a Colossal Teenage Movie Machine: The American International Pictures Story, a 92-minute documentary produced by Ballyhoo, is included on the Viking Women disc. For those used to the short extras Ballyhoo did for previous MST3k sets, this is more of the same - an affectionate look at AIP's history, with a focus on the studio's colorful founder Samuel Z. Arkoff and his overlooked partner, James H. Nicholson. The gentlemanly-as-always Roger Corman is on hand to share his memories, along with recollections from Arkoff's son and other fans of the cheesy movie factory. Viewers beware: the film is presented as one long program with no chapter stops. Pithy, newly filmed Introductions by Frank Conniff are included on Viking Women and Colossal Beast, while Theatrical Trailers are provided on Colossal Beast, The Undead, and The She-Creature. Again, colorful Mini posters reproducing Steve Vance's wild artwork for each title are included in the box.

Two hilarious Joel-era episodes, two somewhat routine Mike-era outings, and an affectionate new documentary on '50s cheese factory American International Pictures make up Vol. XXXIV of Shout Factory's series of Mystery Science Theater 3000 DVD sets. The uniformity of the four movies getting roasted (all '50s AIP productions) slightly downgrades this set to recommended, although as usual it's a nicely done package with a ton of laughs. 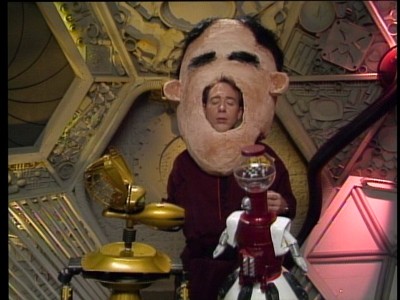 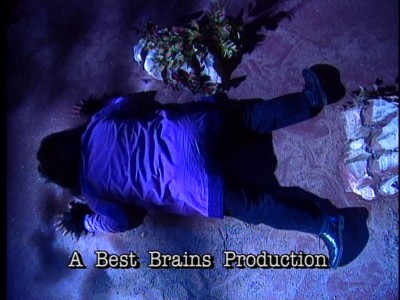