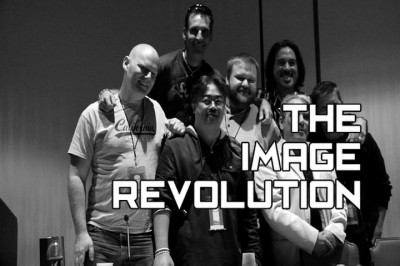 
The Movie
At this year's New York Comic Con, I had the opportunity to listen to Todd McFarlane talk at length about his philosophy on work, and it was fascinating to hear his perspective. Known as a very opinionated guy, he made a lot of sense as he argued that if you're going to give up your family life to work, you better be getting paid well to do so. In this light, the path he took from struggling would-be comic artist to independent superstardom seems rather...reasonable. That's certainly not how he and his compatriots would have been described back in 1991, when the biggest names in comic art--McFarlane, Jim Lee, Rob Liefeld, Marc Silvestri, Erik Larsen Whilce Portacio and Jim Valentino--decided to stop freelancing for Marvel Comics and strike out on their own as Image Comics, doing their own creator-owned projects and shaking up the comic-book industry in the process.

Today, Image Comics is a well-regarded publisher of indie comics of all stripes, from megahit zombie epic The Walking Dead to quirky detective tales like Chew to the feminist genre mash-up Bitch Planet. That wasn't the case in 1991, when Image was the home of superheroes, plain and simple, drawn by the guys who used to draw the biggest names in superheroes, like the X-Men and Spider-Man. The Image Revolution smoothly explains how, having made their names selling millions of comics for their corporate bosses at Marvel, the seven founders, led by an increasingly frustrated McFarlane and an increasingly egotistical Liefeld, realized they could instead be working on their own creations and being their own bosses. The documentary explores how Image came together, the challenges they faced and the incredible successes they had right out of the gate. 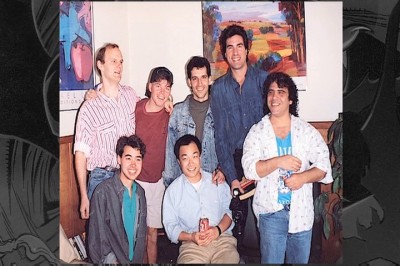 As interesting as it is to hear about the growth of creator-owned comics and the company's origin right from the founding partners (illustrated with comic art versions of their tale, as well as home videos, archival news reports and great clips from a classic Stan Lee-hosted VHS series called The Comic Book Greats), which includes the birth of the comic-book celebrity artist and the development of new fan favorites like Spawn, Youngblood and WildC.A.T.S., the truly great story (as is often the case with tales of runaway success) is what happened next. When the bottom drops out on the comic industry and this new juggernaut is tested both externally and internally, things really get good, as you get to learn about betrayal, double-crossing and a lot of Icarus-style problems at the big "I".

The key to this documentary is the extensive group of interviews it contains, from the seven founding partners to key Image Comics support staff, comic industry observers (like Rich Johnston) and artists who worked on the early Image books, as well as Robert Kirkman, creator of the aforementioned The Walking Dead, who has a unique perspective as a fan of the original Image and a part of its modern day incarnation. All of the main players are pretty candid about how things went down, and so you get to see the other side of the idolized star artists, whether it's the quietly industrious Lee, the brash, yet honest McFarlane and the divisive Liefeld, who is done few favors by the film, whether it's his own interviews or those of his former employees or co-founders. He's nothing if not forthright though, admitting to missteps and generally living up to his reputation. It's also nice to hear a bit about Portacio and Valentino's roles in Image's formation, since they tend to be the forgotten members of the band, due to the fact that their books never took off like the others (for various reasons.)

Though The Image Revolution spends a good deal of time on why things went sour for the main group in terms of the egos and poor decisions, the film (directed by comics documentarian Patrick Meaney [Grant Morrison: Talking with Gods]) feels more like a pro-Image effort than a neutral production, particularly with its rah-rah look to the Image of today. It only briefly explores the way the company flooded shelves with sub-par titles (with no mention of things like the embarrassingly pandering Darker Image's one-issue run) or how it valued flash over substance (gimmick covers and splashy, boob-centric art took far more priority than good writing on most titles.) Hearing from someone in the industry from the time who didn't work at Image would have been nice as well in order to get a different perspective of the changes Image wrought (Joe Quesada, Mark Bagley or anyone at Dark Horse wasn't available?) 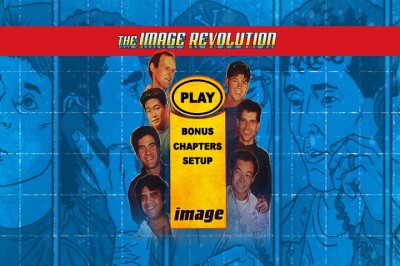 The DVD
The 83-minute film arrives on one DVD, which is packed into a clear, standard-width keepcase. The disc offers a animated, anamorphic widescreen menu with options to play the film, select scenes, adjust the setup or check out the extras. There are no audio options, but subtitles are available in English.

The Quality
With a host of different material sources, as far down as jittery, distorted VHS home-video footage and rough archival local-news video, the anamorphic widescreen transfer here is a bit all over the map, but the new interview footage all looks solid, with appropriate color and a good level of fine detail. Black levels are in range and skintones look. Compression artifacts are minimal at worst, making for a welcome presentation.

The straightforward documentary mix on the Dolby Digital 2.0 track ensures all voices are clean and easily understood, via a center-balanced soundtrack that isn't challenged much, nor does it suffer any struggles, with limited interaction between speech and music and no concerns about distortion.

The Extras
Two sets of extended interviews make up the bulk of the extras here. Up first is 45 minutes with the founders (though apparently Larsen didn't have anything else to say.) Bits and pieces of this material made it into the form thanks to good editing, but there are a few items here that should be checked out, including Silvestri's comparison of Hollywood to comic books and the story behind Liefeld's infamous 501 jeans commercial, as his Spike Lee imitation is a must see (and possibly a hate crime.)

The other set of interview footage (5:33) talks to some non-founders, including members of the cast of The Walking Dead, Fringe star and comic fan Lance Reddick, Image creators Fiona Staples and Kirkman and indie comic vet Larry Marder, who was an executive during Image's early days. Here he tells an interesting story about how Image got involved with Marvel's Heroes Reborn project.

An overlong trailer (2:25) is also included. 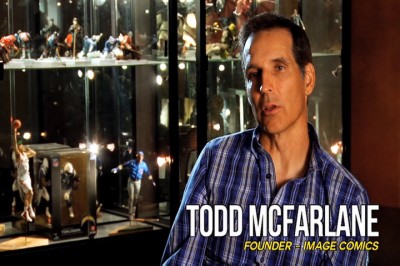 The Bottom Line
Comic fans with fond memories of the X-books of the ‘90s or the birth of Image Comics will certainly enjoy this look behind the scenes of a changing four-color world, even if nothing is exceedingly revelatory for anyone who was reading the trades on a regular basis back in the day, though some eyewitness accounts and home videos offer fresh perspective. Thought it is a bit of an IMage pep rally, the nostalgia factor alone makes The Image Revolution well worth watching, while solid quality and an hour of additional content ensure that those interested will have a good time.