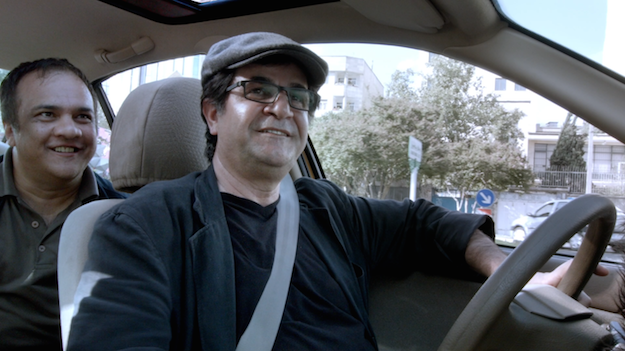 In 2010, Iranian filmmaker Jafar Panahi was sentenced to six years in prison for supposed anti-state propaganda and was banned from both making movies and leaving Iran for twenty years. Since that time, Panahi has still has not been put in prison, but he has clandestinely made three films that comment upon his punishment both directly and indirectly: 2011's This Is Not a Film, 2013's Closed Curtain, and now Taxi, which is so far the best and most effective realization of Panahi's desire to make self-referential metafictions about his plight. Panahi set all three of these films in enclosed spaces (partly for the practical reason that Panahi and his small crew do not want to get caught in the act), but by setting this newest film in a moving vehicle outfitted with tiny cameras, the writer-director makes it clear that he doesn't have to be stuck inside a room to experience confinement.

Panahi appears as himself in Taxi, driving around Tehran in the titular car, presumably hoping to meet some interesting people to put in a movie. Panahi the filmmaker smartly never has Panahi the onscreen character state an explicit purpose for driving around in a cab full of cameras, which allows viewers to witness the film's encounters unfold without expectation. Once Panahi's first fares, a schoolteacher and a mugger, start talking to each other about why the authorities should or should not use capital punishment to send a message to petty criminals (the mugger is pro-hanging), we quickly get a sense of what the filmmaker is up to. He's using the tendency of taxi passengers to vent their frustrations and talk politics as a way to create a tiny kaleidoscope of insights into life in Iran.

This first dramatic moment is tricky, because it might lead us to believe we are in for a series of polemics about what is wrong with Iran, but Panahi nicely grounds the moment -- and indirectly acknowledges his authorial guidance -- by having a third passenger wait until those two leave and then ask Panahi if they were actors. Panahi just smiles and doesn't answer.

As the ride continues in essentially real time, Panahi interacts with two superstitious old women carrying a very special fishbowl, an injured pedestrian who demands someone make a video will for him so his wife doesn't get shafted if he dies, a DVD bootlegger who at one point uses the back of Panahi's cab to peddle outlawed Western media like The Walking Dead season five, an old neighbor who talks about getting robbed and not having the heart to turn in the robbers, a defense lawyer who has worked with Panahi and other activists, and most charmingly, Panahi's precocious and chatty tween niece Hana.

Panahi squeezes in some of his feelings about film during Taxi's conversations, such as the assertion that "all films are worth seeing," although he also urges a young student filmmaker not to bother looking for inspiration from old films. He also reveals the insanity of the government restrictions placed upon Iranian filmmakers by having little Hana discuss a school assignment she has been given to make a "distributable" film that forgoes "sordid realism." Later, while Panahi runs an errand, Hana uses her little camera to capture a nearby young boy picking up some money dropped by a passing wedding party. Hana waves the boy over and tells him he has to return the money, so he can be the hero of her film. Sordid realism wins out, however, when the poor boy can't bring himself to give back the cash to the flashily-dressed groom.

This is a film that sneaks up on you. The simplicity of its approach might initially make it seem like a minor exercise, but the accumulation of the film's encounters eventually packs an emotional and intellectual wallop. (The generosity of spirit Panahi's characters exhibited got me busting out the tissues a couple of times.) Taxi is a breezy movie, with quite a few laughs, but it also leaves viewers with a lot to unpack once it's over. 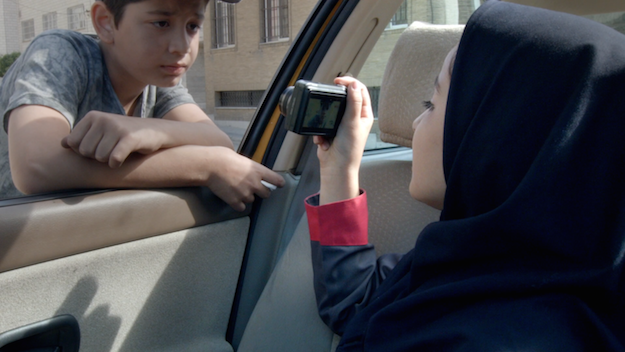 The Blu-ray
Jafar Panahi's Taxi is packaged with a color booklet featuring an essay by documentary filmmaker Jamsheed Akrami.

The Video:
Shot mostly on GoPro-type mini-cameras stuck into the taxi, this AVC-encoded 1080p 1.78:1 presentation is actually quite clean and satisfying, with a nicely balanced video look. A few moments are shot on a little consumer camera and on an iPhone, and these shots are a little less stable, but this is clearly intentional.

The Audio:
The film's Farsi soundtrack (with optional English subtitles) comes in both DTS-HD MA 5.1 surround and DTS-HD MA 2.0 stereo mixes. Both sound great, and the 5.1 does actually offer some interestingly layered ambient sound design to evoke the world around the cab. 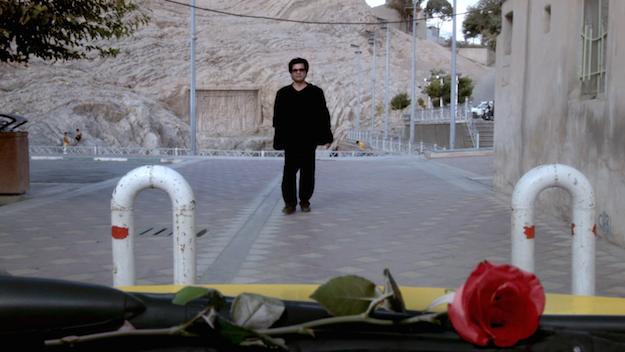