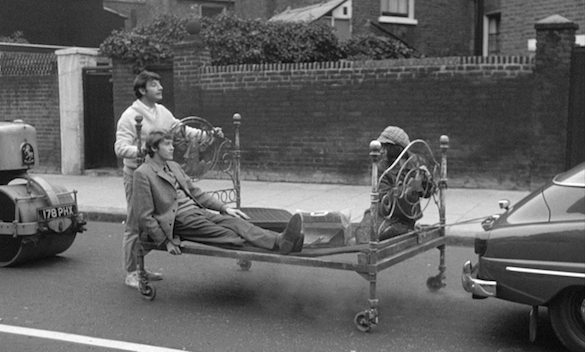 I've had a tumultuous history with Richard Lester's 1965 film, The Knack... and How to Get It. As a high school fan of Lester's Beatles movies (especially A Hard Day's Night), I thought The Knack was a perfect extension of the playfully surreal neo-Dada slapstick of those flicks, but this time married to a snappy, silly romantic comedy plot (adapted from Ann Jellicoe's play by Help! screenwriter Charles Wood). I was convinced it was one of the best films I had ever seen. Some years later, I tried to show the film to some friends, and we barely got twenty minutes in. None of the jokes landed, none of the characters were appealing, and I wound up doubting my younger critical faculties. Now, after staying away from the film for several years, the new Blu-ray release from Kino Lorber Studio Classics offers an opportunity to reappraise my reappraisal. Inevitably, the pendulum has swung back the other way, but not entirely. I am now convinced that The Knack is a pretty great, but flawed, film.

The story of The Knack concerns two roommates who share a townhouse. One of the roomies, jazz drummer Tolen (Ray Brooks), is a ladies' man of the first order; the other, schoolteacher Colin (Michael Crawford), is decidedly not. The opening sequence shows dozens of attractive women, all with form-fitting white tops, miniskirts, and mannequin stares, lining the steps leading to Tolen's top-floor boudoir, and all being "served" in turn. Meek Colin can only helplessly poke his head out of his door, one floor down, and inadvertently ogle the parade of beauties slowly making their way up the stairs. ("It's not like that," Colin later says directly to the audience. "It's exaggeration!"). When the unlucky-in-love Colin asks for seduction advice, Tolen reveals he is all about callous domination of his fair, interchangeable conquests; Colin is too steeped in English repression to properly grasp this concept.

Two other characters soon float into their orbit. One is cynical painter Tom (Donal Donnelly), who moves into the ground-floor room of the townhouse and immediately starts painting everything (including the mirrors) white, because he claims to loathe the color brown. Tom's immediate distaste for Tolen makes him a necessary sidekick for Colin, who needs some support. The other character is mousy country girl Nancy (Rita Tushingham), who spends the first half of the film wandering around London in search of the YWCA. When she comes across Colin and Tom buying a big bed from a junkyard -- Colin thinks this accoutrement will help his cause -- they quickly become a trio of playpals. Lester turns the journey home with the new (old) bed into an opportunity for reality-bending slapstick, climaxing with a pseudo-raft ride on the bed down the Thames.

Once they get back home, it becomes an inevitable struggle between Colin and Tolen to see which one can claim Nancy's affections. This is one of the key aspects of the film that has shifted in effectiveness for me over time. The film clearly wants us to view Colin as a bumbling nice guy who just needs to find the right girl. When I was in high school, I completely related to Colin; now, I find him too clueless to be relatable. Michael Crawford is still enormously amusing in his performance, but it just plays more like a cartoon for me. Oddly, at the same time, Ray Brooks's performance as Tolen comes off as more nuanced and intriguing, making him the better-rounded character. I don't side with him: he is still clearly the villain of the piece, and his inevitable comeuppance is still satisfying, but he feels more like a human than Colin.

Nancy, of course, ends up with the most interesting character arc in the piece. She starts off as a shy outsider, the subject of Colin's crush and Tolen's sport. She nearly falls prey to all sorts of wooing. But then, she turns the tables, all thanks to one word: "Rape." Not the act, just the word, which Nancy says repeatedly, to keep her suitors at bay. As problematized as jokes about rape have become in recent years, this sequence is nonetheless the funniest and most effective in the film. Actually, it probably works better now because of those stigmas.

Lester is as adept at staging his madcap setpieces as he is at handling the scenes that are just the characters whipping Ann Jellicoe's dialogue at each other in a room. The four lead actors are all game, which makes every scene crackle. It's just the unconvincing moralizing about Tolen and the coupling of Nancy and Colin that gives the film an oddly formulaic aftertaste, despite all of its Goon Show/Monty Python anti-narrative tendencies. Nonetheless, I find myself again a proponent of this film -- at least, until the next time I watch it. 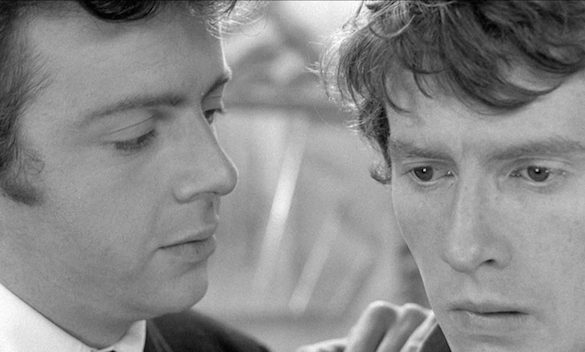 The Video:
A touch inconsistent, but overall this AVC-encoded 1080p 1.66:1 transfer is stable and clean, with above-average detail reproduction, strong blacks, and nuanced contrast. Unfortunately, the sequences with opticals, like the opening credits, have been pulled from distinctly more beaten-up elements that feature plenty of dirt and scratches. A few non-optical shots seem to have been pulled from this less pristine source as well, but mostly this transfer utilizes good-looking stuff.

The Audio:
Not too many complaints about the DTS-HD MA 2.0 mono soundtrack, apart from some limitations due to age. The dialogue, including plenty of ADR-ed man-on-the-street commentary from elderly onlookers, is clear and understandable. John Barry's score is nicely featured, although sometimes the cymbals come through sounding a little too sizzly and overmodulated. No subtitles.

(6:31 total) - Two episodes of the web series Trailers From Hell, the first with director Allan Arkush (Rock 'N' Roll High School) commenting on the original trailer for The Knack and the second with director John Landis (The Stupids) commenting on The Bed Sitting Room.

Final Thoughts:
Fans of A Hard Day's Night should certainly check out this swinging London-set screwball comedy. The sexual politics don't entirely ring true nowadays, but there's plenty to chew on, marvel at, and giggle about here. Recommended. 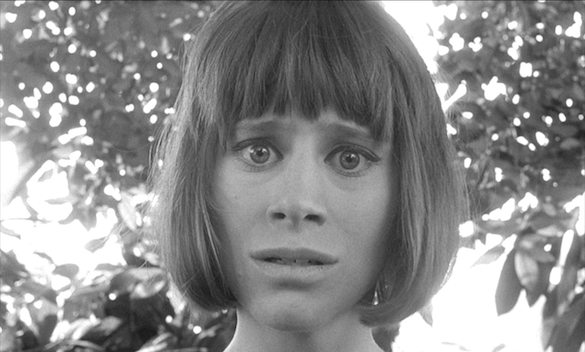