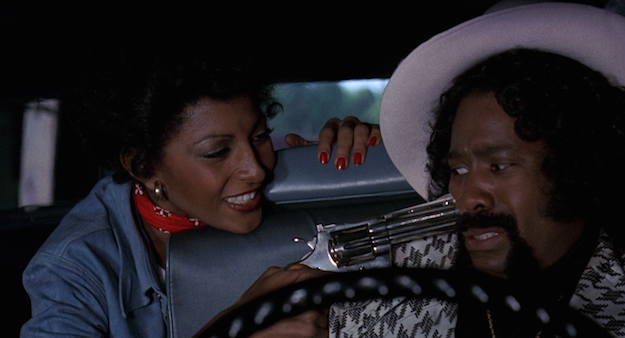 There's a funny schizophrenia occurring in the 1975 Pam Grier vehicle Sheba, Baby. It was the final film on Grier's original contract with American International Pictures (AIP), the company that had helped make her a star with Coffy and Foxy Brown, but Grier was getting tired of playing revenge-seeking pseudo-prostitutes, no matter how badass. And so, to make their big name happy, AIP made Sheba, Baby PG-rated and offered Grier the role of private detective Sheba Shayne. But here's where the schizophrenia first comes in: Sheba, Baby is still incredibly violent for a PG flick and Sheba spends more time seeking revenge (like her previous characters) than doing any real private detective stuff.

Producer David Sheldon and director William Girdler, who allegedly churned out the script for Sheba, Baby together in a night, put their heroine on the trail of a barely coherent scheme to buy out all the easy-loan places in the black areas of Louisville, Kentucky. Sheba's dad Andy Shane (Rudy Challenger), who sweetly calls our heroine "Little Andy," runs one of these loan spots, and he's getting pressured by gangsters to sell. Andy refuses, so both he and his shop end up shot full of holes. Sheba goes out on the warpath, sometimes helped and sometimes hindered by her father's partner Brick (Assault on Precinct 13's Austin Stoker). After roughing up some low-level dudes, she finds out that the head gangster is a weasel named Pilot (Dolemite's D'Urville Martin) and goes after him. After Pilot men's attempt to ambush her, she eventually corners the big man at the Kentucky State Fair (production value!). Jamming Pilot's neck up against the tracks of a roller coaster, Sheba manages to get him to confess that the real Big Bad is a yacht-owning white dude nicknamed Shark (Dick Merrifield). All that's left for Sheba to do is to get on that boat and get that father-killing mutha.

Even though it's arguable whether or not any of the flicks Pam Grier headlined for AIP are actually good movies -- Coffy has its inventive moments certainly, but Foxy Brown drags more than it should* -- Sheba, Baby is easily the least of the run. William Girdler lacks the panache of Grier's prior collaborator Jack Hill, either with a pen or a camera, and the majority of the dialogue, performances, and visuals lay flat. The action scenes are pretty peppy -- Girdler's not inept, just not particularly clever -- and character actor Christipher Joy adds some pizzazz and humor to his brief turn as a "walking pawn shop" in a pimp coat who gets interrogated by Sheba inside a car wash. (Watch out for that hot wax!)

Even with its weaknesses, I still mostly enjoyed my time watching Sheba, Baby. Pam Grier is stunning as always, and the flick moves at a good clip to prevent too much extended boredom. If you haven't seen any of Grier's '70s-era flicks, I would not start here. If you're already in the fan club, jump right in.

*I haven't seen Friday Foster, so I can't properly weigh in on that one. 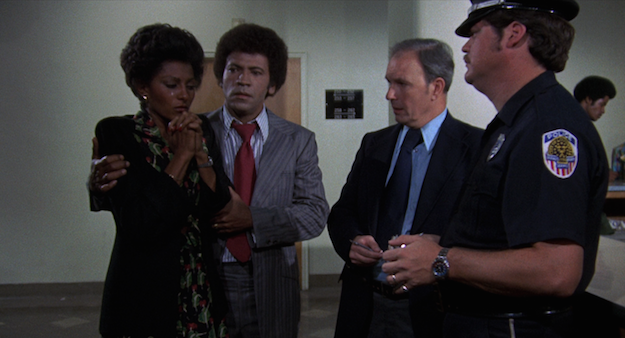 The Blu-ray
Arrow sent DVD Talk a Blu-ray check disc and not the final Blu-ray/DVD combo packaging available for sale. As per usual in this case, I will hold off on an in-depth review of the A/V quality now and update this section when we get sent the actual release version. Assuming that the quality of the finished product is similar to the check disc, I can assure fans of Arrow's exploitation releases that what I looked at matches their typically high A/V standards.

- First up is a discussion between producer David Sheldon and Mondo Digital's Nathaniel Thompson, which is an all-encompassing talk about Sheldon's producing career that focuses mostly on the business side of filmmaking: working at AIP and then as an independent producer. It's good for folks who'd like to dig into the history of independent film deal-making, but a little dry overall. The second commentary is much more colorful and entertaining, and is conducted by Patty Breen, the creator of williamgirdler.com. Breen claims to have seen Sheba, Baby more than any other human, but that definitely does not mean that she fan-girls out about it the whole time. She's well aware it's pretty stiff and flat, and she nicely blends in some good-natured digs at the production along with her morsels of trivia, observations about the action, and praise.


Final Thoughts:
Sheba, Baby is a lesser effort from Pam Grier in her prime era. (Subprime, if you will.) Exploitation fans know what they are getting themselves into, and even with a PG rating, the flick is still pretty brutal. Arrow offers some nice supplements (especially that Patty Breen commentary, which is my favorite part of this package), so I figure this release comes Recommended. 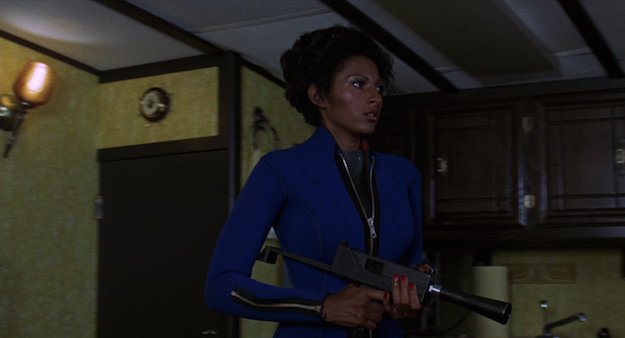