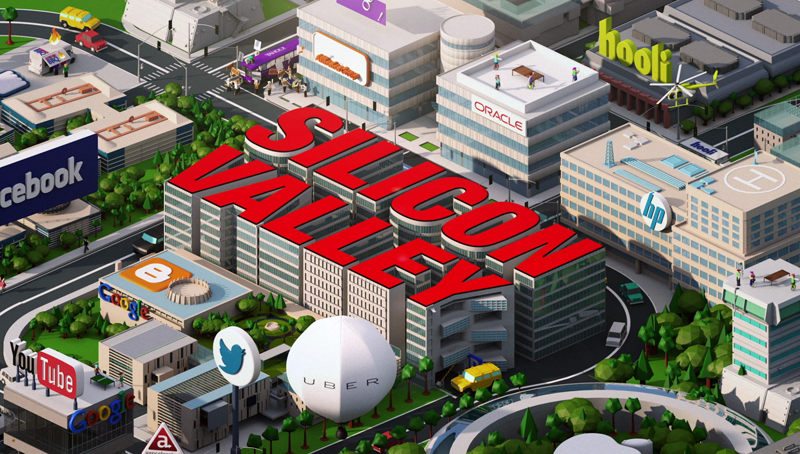 
The Story So Far...
Another in a long line of fantastic comedy series from HBO, Silicon Valley, created by workplace-comedy savant Mike Judge, follows the struggles and successes of computer programmer Richard Hendricks (Thomas Middleditch) and the small team at Pied Piper; a motley crew portrayed by Kumail Nanjiani, Martin Starr, T.J. Miller and Zach Woods. In the first season, the group took on Gavin Belson and his massive Hooli corporation in order to launch a new compression software, handicapped by their own insecurities and screw-ups and the machinations of the movers and shakers of Silicon Valley. The first season was released for home video in March of 2015, and DVDTalk has reviews of the Blu-ray and DVD releases.

The Show
In Silicon Valley's first season, the underdogs at Pied Piper battled the corporate behemoth known as Hooli to establish themselves as a player in the tech industry, powered by Hendricks' revolutionary compression algorithm. With that out of the way, the second season tackled the next obvious step: growth. In the tech industry, if you aren't growing, you're essentially dead--whether you're making money or not. Richard and his team are now tossed in the deep end, dealing with big money and big stakes, and they aren't exactly ready for either, as their first attempt to get investors and their ill-fated association with venture capitalist bro Russ (Chris Diamantopoulos) proves clearly.

The main problem is Richard, an anxious, awkward tech geek more comfortable in front of a keyboard than people. He struggles with just about everything, a trait that Middleditch portrays expertly. Because of that problem, which results in a hilariously painful bout of night sweats in one episode, Richard tends to sabotage his team at every turn, be it unwittingly handing the core of his technology to another company or creating hostility with others in the industry. Richard only wants to bring his idea to fruition and do the right thing by people, but being naive and uncomfortable with others leads him into trouble.

It doesn't help that he's got a massive enemy in Gavin Belson (Matt Ross), the egomaniacal leader of Google stand-in Hooli. Following the events of the first season, Belson has bet big on an attempt to outdo Pied Piper with Nucleus, their own version of Richard's compression technology. Unfortunately, he's promised more than his team can deliver, and he's up against it, turning him into a raging coil of fear and anger willing to do whatever it takes to come out of top, including bringing a lawsuit against Richard claiming ownership of Pied Piper, since he once worked for Hooli. The case forms the backbone of the season, in part because of Belson's ridiculous plan to promote hapless former Pied Piper employee Big Head (Josh Brener) in order to "prove" that Big Head was responsible for the company's success, an incredibly funny element of the season overall. 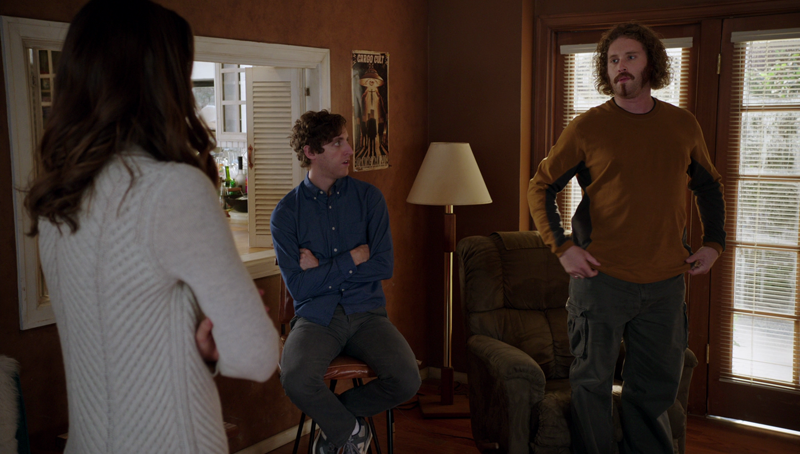 Sadly, the counterpoint to Belson in season one, bizarrely awkward venture capitalist Peter Gregory (Christopher Evan Welch) is not on hand this time around, due to Welch's passing from cancer. The show managed to find a distaff version to slide into his spot, as Suzanne Cryer's Laurie Breem brings all the weird affectations (in what's almost an imitation of Welch) but cranks up the intensity a bit to make the role unique. Though she doesn't get the moments that made Gregory so interesting, she does keep the dynamic of the show moving forward, and changes things up with Pied Piper's VC liaison Monica (Amanda Crew). Breem isn't the only new addition, as the team adds a new coder in sarcastic Carla (Alice Wetterlund) and a wonderfully dark disbarred lawyer, Matt McCoy's Monahan, both of whom bring a lot to the show.

Of course, the rest of the cast remains a tremendous asset, whether it's the bickering duo of Guilfoyle (Starr) and Dinesh (Nanjiani), walking id Erlich (T.J. Miller) or an increasingly complex slice of white bread in the form of Jared (Zach Woods, who is still playing the stock Woods character, but with more interesting traits.) The mix is essentially perfect, with Starr's dry delivery, Nanjiani's born loser, Miller's line-walking energy and Wood's oddness join with Middleditch's vulnerable idealism to make an appealing group worth cheering for, and the comedy they create is hilarious and delightfully crafted under the leadership of Judge and his team.

Though the comedy is fantastic, moving from subtle to in-your-face seamlessly, with plenty of satire of the tech industry throughout, the thing that's most enjoyable about the series manages to be the rich storyline of Pied Piper's attempts at success in the face of overwhelming odds, which borrows a bit from reality while feeling original. Every episode moves the story ahead a little bit, beautifully working in twists that feel wholly organic. A blend of corporate intrigue and courtroom drama, with the right amount of comedy throughout, the plot here is as good as any straight drama series, making the time between episodes a painful one when watching during the original schedule. Thus, binge-watching makes following the series that much more enjoyable until you hit the final episode, and the cliffhanger leaves you waiting even longer. Few shows are as well-made from all angles as Silicon Valley. 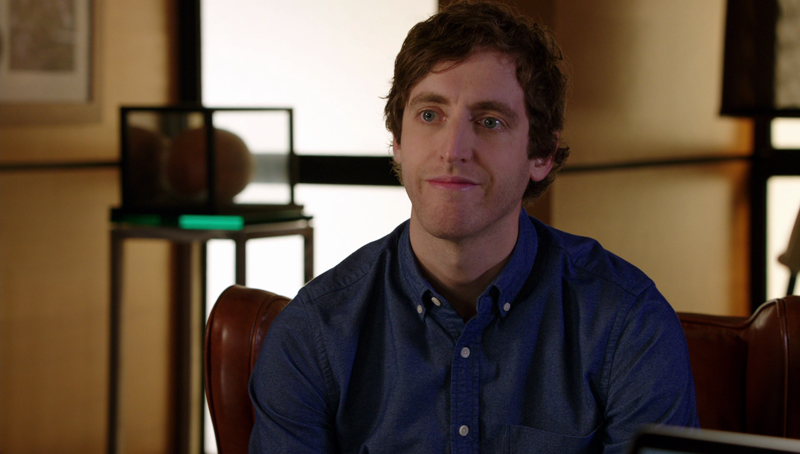 The Discs
The second season of Silicon Valley arrives on two Blu-ray discs, packed into a dual-hubbed Blu-ray keepcase, which comes in a slipcover that repeats the cover art. Clips from the show play behind a menu that offers a choice to select episodes, adjust the setup and check out the special features. Audio options include English 5.1 DTS-HD Master Audio, French 5.1 DTS Digital Surround and Spanish 2.0 DTS Digital Surround tracks, while subtitles are available in English SDH, French, Spanish, Danish, Swedish, Norwegian and Finnish.

The Quality
The 1080p, AVC-encoded transfer looks great, with a high level of fine detail, appropriate color (usually in an earthy palette) and skin tones, as well as solid black levels. The show doesn't have the visual highlights of the first season, taking place in a more restrained setting (sans holograms or laser lights) but it still looks tremendous, as seen in the grand shots of San Francisco's AT&T Park or the tech-heavy interiors of the Pied Piper garage. Digital distractions aren't an issue, with the episodes looking tremendous thanks to the space allowed by putting just five half-hour episodes per disc.

The 5.1 DTS-HD Master Audio track isn't tasked with doing a great deal (this is Silicon Valley, not Star Wars) but it handles what the show throws at it without issue, with clean, crisp dialogue and a healthy dose of atmospheric effects, while all the elements maintain proper separation. The side and rear speakers manage the room sound, and offer a boost to the show's music, which is also where the low-end gets the bulk of its responsibility, especially during the traditional end-credits hip-hop. Solid performance all around.

The Extras
There are six audio commentaries this time around (two less than season one). With a mix of cast members joined by Judge or writer/director Alec Berg, these tracks are a fun listen thanks to the friendly feel amongst the participants (who joke about their status versus that of The Big Bang Theory.) Among the topics covered are the number of women on the show, the role of improv in the show, story points that ended up cut from the show, slash fiction about the show's characters and the reality of venture capitalists as portrayed in the show. The group gets caught watching at times, and some editing has taken place causing some gaps (particularly in episode 10), but overall they are a must-listen for fans of the show.

Last season, the commentaries frequently mentioned deleted moments, but there were none to be found. This time around, there actually are deleted scenes available to check out, eight in all running 10:50, but many of the most interesting things mentioned, like various improv runs, are still sadly missing. There are a few cuts worth checking out though, including a lame face-off between the Pied Piper crew and the End Frame team and Dinesh unwittingly being a jerk.

After three last time out, this season offers up just one featurette, the brief (3:08) "Reality Bytes: The Art & Science Behind Silicon Valley." Featuring input from Judge, Starr and Nanjiani and a few of the staff members, the piece talks about the reality behind the show and the work that went into creating the compression concept at the show's core. It's impressive how deep it went. 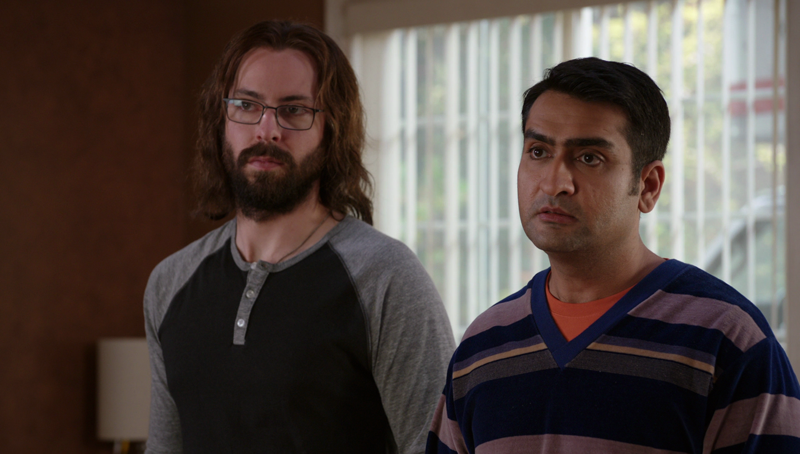 The Bottom Line
As good as the balance between comedy and story was in season one, the second season of Silicon Valley is even better, with a terrifically engaging, at times tension-filled, tale of corporate intrigue that's fantastically funny throughout. The Blu-Ray release looks and sounds wonderful and offers some excellent extras, though it's certainly less than what was included last time. That said, the show is so good that you'll want to be able to revisit it, and these discs are your best option.