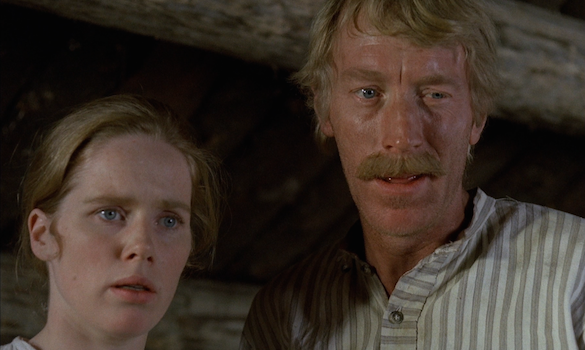 In the early '70s, Sweden's best-loved novels, Vilhelm Moberg's Emigrants quartet, were adapted by director Jan Troell (Everlasting Moments, Here Is Your Life) into two quietly entrancing movies that each surpass the three hour mark: The Emigrants (1971) and The New Land (1972). The films are occasionally slow, but rarely feel unduly contemplative. Instead, the four source novels provide enough fodder to pack quite a lot of incident and drama into what is essentially a single six-and-a-half-hour story.

Max von Sydow and Liv Ullmann unselfconsciously command the screen as the (initially) young farmer Karl Oskar Nilsson and his wife Kristina. In the first half of The Emigrants, we see this loving couple toiling away in mid-19th Century southern Sweden. Their poor, rock-laden soil is unable to keep enough food on the Nilssons' table, and it doesn't help matters that Karl Oskar very much enjoys sleeping with Kristina, causing their hungry family to grow and grow. The predicament calls to mind that of the young farming family in Jean Renoir's recently re-released 1945 film The Southerner, but the oppression of Sweden's religious oligarchy makes the idea of a lowly farmer moving up in society a pipe dream and leaves the characters with an outlook far bleaker than that of Renoir's essentially sunny clan.

Karl Oskar and Kristina aren't the only ones feeling the pinch either. Karl Oskar's younger brother Robert (Eddie Axberg) likes to read science books and daydream, but he is forced into work as a farmhand, serving a physically abusive boss. Kristina's uncle Danjel (Allan Edwall) holds religious meetings in his house, in flagrant defiance of the village's church leaders and faces banishment for his stance.

Anyone who took a look at the title won't be surprised by what happens next: the group decides to leave Sweden for America. The script by producer Bengt Forslund and director Troell offers a few moments of subtle dark humor as the family members prep to leave and naively shrug off warnings about cholera and seasickness. Uncle Danjel suggests that God will recognize their righteousness and protect them from diseases. He also theorizes that God will give them the ability to speak English when they reach the American shore. Unsurprisingly, cholera and seasickness are widespread during the turbulent and sometimes hellish journey presented in the second half of The Emigrants, and more than a few significant characters fail to survive the journey. 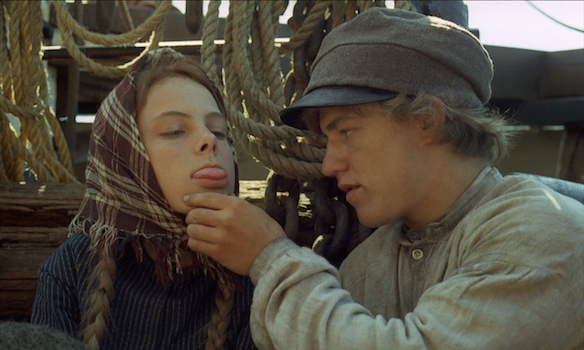 Through these difficult travels, Troell subtly builds relationships that will change and grow during the next movie and a half. Kristina initially resents one of her uncle's acolytes, a former prostitute named Ulrika (jazz singer Monica Zetterlund), but slowly comes to prize her as one of her best friends from home. Meanwhile, Robert's friendship with his simple farmhand buddy Arvid (Pierre Lindstedt) gets mildly strained when Robert develops a crush on Ulrika's daughter Elin (Eva-Lena Zetterlund), turning Arvid into the sullen third wheel.

The arduous journey initially bonds the emigrants more tightly, but once they arrive in Minnesota (the ones that survive), they basically disperse. This makes the second film The New Land more distinctly episodic and meandering than The Emigrants, although Troell (who also shot and edited both films) energizes many sequences by allowing the style of shooting and cutting to stray from the more subdued, classical approach of the first film. An example of this more experimental style appears after Robert and Arvid decide to seek gold in California. Some years pass and Robert returns, weary and emotionally scarred by the life of a prospector. Gradually, Robert is haunted by fragmented flashbacks of his and Arvid's travels, and for these sequences Troell starts incorporating more handheld camerawork, removes the sound of all the dialogue, and features improvised jazz drumming on the soundtrack. It's a stylistic gamble, but one that pays off emotionally.

The New Land also touches upon the uneasy relationship between white settlers and the nearby American Indian tribes. Troell's portrayal of the local Dakotas is fairly sympathetic, which initially makes Kristina's violently fearful reaction, when two curious tribesmen wander into the Nilsson's home, seem like the product of naive prejudice. Maybe it is, but later in the film we witness the shockingly grisly fate of some other Swedish settlers during the 1862 Dakota Uprising, and suddenly her caution doesn't seem quite so misguided.

Even with its decades-spanning scope, Troell's diptych doesn't feel grand exactly, despite numerous moments of beauty. Instead, these films feel more life-sized, rooted in the everyday struggle of its ordinary characters. Max von Sydow and Liv Ullmann deserve particular credit for their consistently grounded yet utterly magnetic turns, making us feel like we've witnessed the lifetime of a real couple flash before our eyes when the two films have concluded. The two actors have been paired together onscreen many times, but rarely in the service of a relationship with such contagious warmth and compassion. 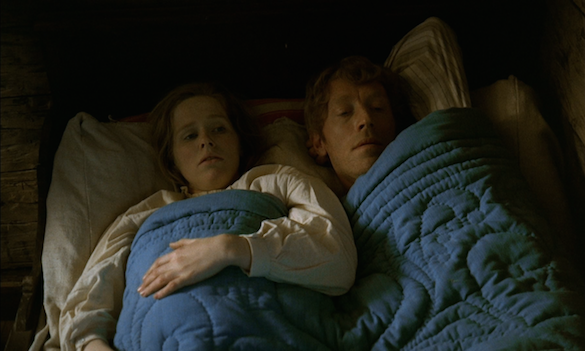 The Blu-ray
The Emigrants and The New Land are both featured on separate Blu-rays, with bonus features (see below) divided up between the two discs. Also included is a fold-out insert with an essay by critic Terrence Rafferty.

The Video:
Another reference-quality job by Criterion. The AVC-encoded 1080p 1.66:1 transfers are pretty much spotless, with excellent clarity (for example, you can make out the subtle cracks in the wood of a log cabin during a wide shot). The palette suggests a faded photograph, with golden and sepia hues, but the transfer is anything but faded. Colors are vivid and saturated, and the blacks are inky. Film grain is consistent.

The Audio:
The Swedish LPCM mono audio (with optional English subtitles*) is also exquisitely preserved. The first film is fairly naturalistic, with few overt stylistic flourishes. It's also fairly spare in terms of musical score. The second film is a little more experimental, picking and choosing what sound elements come to the fore, and even incorporating some improvised jazz drumming during some of the flashbacks. In both cases, the soundtrack is clear and effective, and doesn't feel too limited by its narrow soundstage.

*Brief portions of the dialogue are in English, but unlike their recent release of The American Friend, Criterion has not opted to include an additional English SDH track to cover these exchanges.

(HD, 7:27) - Famous New York critic Simon expresses his admiration for these two films, particularly Troell's sensitivity to and understanding of the ways of low-class people.


Final Thoughts:
For some, Jan Troell's The Emigrants is a forgotten historical footnote: a foreign-language also-ran in the Oscar race for Best Picture during the year of The Godfather. Criterion's gorgeous new Blu-ray offers an excellent opportunity for a new audience to discover this sometimes lyrical, sometimes brutal saga, complete with its "sequel" The New Land (which is really its essential second half). Highly Recommended. 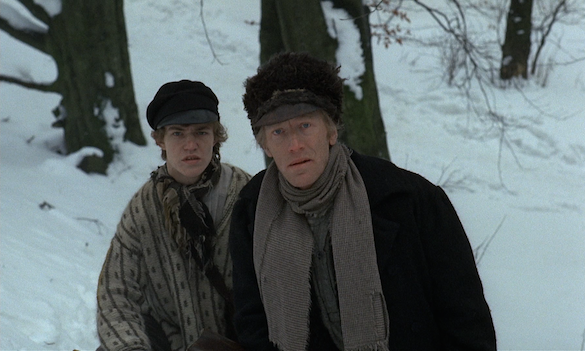