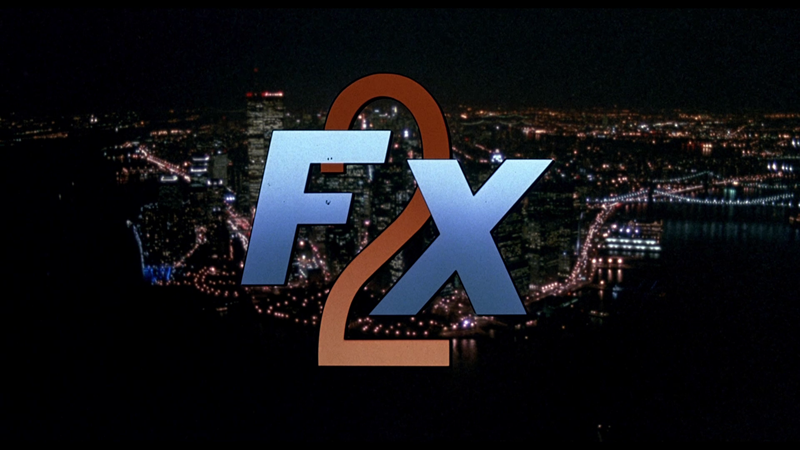 
The Movie
As I admitted in my review of F/X, I never saw that film until May of 2015, nearly 30 years after it came out. But I definitely saw F/X2. I watched that movie an incredible amount of times. Looking back on it now, I wonder if the brief bit of nudity early on (in those pre-internet days) had something to do with it, but it's really a tremendously enjoyable action film, and though I had never seen the first film, I never felt like I was missing anything. F/X2 stands on its own--the rare sequel to a good movie that improves on the formula.

After going on the run following a brush with corrupt federal agents in the first film, Rollie (Bryan Brown) has retired from the effects game, instead developing high-tech toys. How every the police-officer ex-husband of his girlfriend Kim (Rachel Ticotin) draws him into taking part in a sting operation to catch a guy stalking a beautiful woman. Unfortunately, it goes bad, Mike ends up dead and, once again, Rollie is up to his neck in corruption and double-crossing, leaving him fighting for his life. If he's going to make it out alive, he's going to have to figure out exactly who he's up against and he'll need help from his buddy, former police officer Leo (Brian Dennehy.)

Though F/X2 builds on what happened in the first movie, it doesn't rely on the viewer to come armed with a knowledge of that film, instead revisiting important elements without resorting to blunt-force exposition. In a way, it's a bit like fan service, but it's also smart in how it offers newcomers an integrated recap. As a result, the main plot doesn't really get rolling until about 30 minutes into the film, since we have to catch up with Rollie and find out what's happened in the five years since the events of F/X. That doesn't mean we don't get right into the action though, as an early misdirect gets things off to to an exciting start, before a key bit of utterly creepy technology is introduced: a remote-controlled robot clown. Once you see it, you will never forget it.

While Brown and Dennehy are a great deal of fun as a duo, and the plot, though a bit twisty and convoluted, drawing in elements like the Vatican and the Mafia, offers enough to power through the 108-minute run-time without feeling like there's any padding, the true appeal of F/X2 is in the special effects-driven set pieces, including an innovative and engaging fight scene involving the aforementioned clown, a tremendously enjoyable supermarket-set game of cat and mouse (with a touch of MacGyver for good measure) and a climactic siege that brings it all together. Though logic doesn't always hold sway over the proceedings, they are always entertaining.

Director Richard Franklin (cult greats like Patrick and Cloak and Dagger), working from a script by Bill Condon (Gods and Monsters), keeps the film in seemingly constant motion, so it never drags, while raising it stylistically above films of the same era and genre, keeping an edge of paranoia and tension always nearby. However, it never takes itself too seriously for too long (one dramatic stretch feels a bit out of place, but the sentiment is earned.) Usually, F/X2 errs toward keeping things fun, even when all hell is breaking loose, which is not hard when Dennehy looks to be enjoying himself in the gumshoe role and Brown plays the smart-ass well. 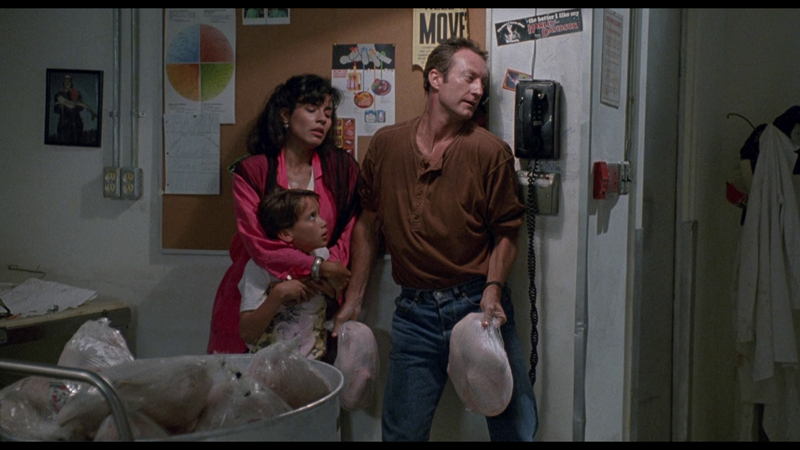 The Disc
Following its predecessor into Kino's Studio Classics line, F/X arrives on one Blu-ray disc, which is packed in a standard keepcase using the original theatrical poster art as the cover. The disc has a static menu with options to watch the film, select scenes, adjust the set-up and check out the extras. There are no audio options, but subtitles are available in English.

The Quality
The 1080p, AVC-encoded 1.85:1 transfer on this disc is impressive. There are a number of points in the film where the look would not give away how old the movie is, as color is consistently vibrant (where it should be) and black levels are deep (the shots of the city at night are quite nice.) The level of fine detail is very high and the image is clear and sharp across the board, with a nice layer of consistent film grain to it. Digital distractions are not a concern. After watching the trailer (see The Extras), the quality of the visuals here is even more striking.

The audio is presented via a DTS-HD Master Audio 2.0 track, which, like the original, offers no concerns. For the most part, the mix is center-balanced, though there's some occasional discrete placement of sound effects between the two channels, and overall you'll hear good separation between them, that guitar-driven music and the clean dialogue. There's a proper power to the sound that lets that Lalo Schifrin score really sing.

The Extras
The extras aren't as substantial as they were on the first film, unfortunately, but there is a very rough-looking vintage EPK making-of featurette (6:31), with interviews with Brown, who explains why they made a sequel, Dennehey, Franklin and special effects supervisor Eric Allard, as well as a bit of on-set footage, including a look at the stunts and special effects. It's a bit heavy though on footage from the film and explaining the plot.

Also included are the trailers for F/X2 (1:51) and F/X (2:35), just like on the first film's Blu-ray. THey both give away almost all the big moments in the film, so if you've never seen either F/X, skip them. Heck, if you haven't seen the films in a while, skip them too. They just ruin the experience. 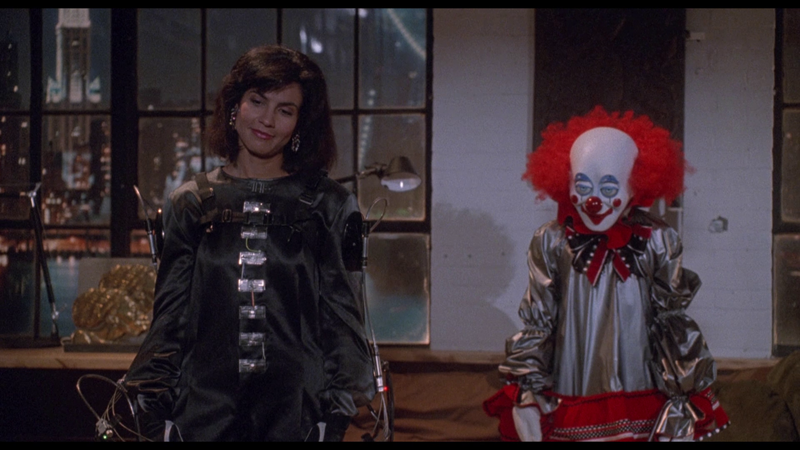 The Bottom Line
F/X is good, but this sequel is the one where the series' concept really shines, with a number of terrific set pieces, and charming turns from Brown and Dennehy. Though it came out in 1991, it's got that delightful ‘80s action-film feel. The Blu-ray looks and sounds great, though the extras are a rather slim compared to the first film. That said, this is the better overall experience, and the film is eminently re-watchable, so it's certainly worth having in your collection.