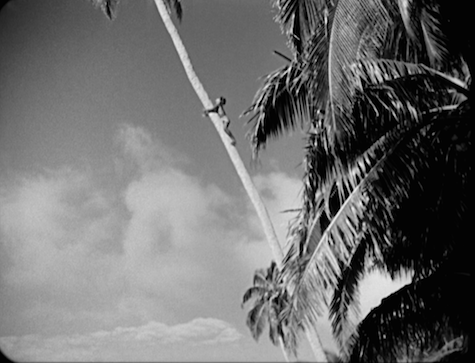 After the success of the 1922 (semi-fictional) documentary about Inuit hunters, Nanook of the North, director Robert J. Flaherty was tapped by Paramount Pictures to aim his camera at some other far-flung corner of the globe and bring back another hit. Maybe Flaherty was sick of the cold, because he decided to head to the South Seas, to the Samoan island of Savai'i, where he ended up making Moana ("Moh-AH-nah"). Along with his wife Frances and their three daughters, he spent two years trying to study the activities, history, and customs of the Samoan people there, while also trying to compile these aspects into some kind of narrative. (Flaherty's work has been controversial over the years, since much of it is staged and therefore not documentary filmmaking in the strictest sense. Moana is in this tradition, although rather than feeling like a "faked" documentary, it plays more like a fictional story that incorporates striking documentary footage into its telling.)

Moana was not nearly as profitable as Nanook when it was released in 1926, and it basically disappeared into obscurity shortly thereafter. Nearly half a century later, Monica Flaherty (one of those three daughters who traveled to Savai'i) decided she wanted to not only revive the film, but also to capture all the sounds and songs of Samoa that the previous version had failed to reproduce. Monica and noted documentary cameraman Richard Leacock (Primary) undertook a series of trips to the Samoan Islands and Hawaii with tape recorders, to capture ambience, effects, singing, and even some dramatic dialogue. The newer soundtrack is completely convincing, and even though the lips don't always match the sounds of people nonchalantly talking (Monica didn't try to make her actors "loop" specific dialogue precisely, like in a traditional production), the rest of the soundtrack genuinely feels like it must have been recorded at the same time as the onscreen action -- not fifty years later.

Unfortunately, even with its carefully crafted new soundtrack, Moana with Sound has languished in relative obscurity because there have been no decent-looking prints of it around. This has finally been rectified thirty-five years after its initial release, and nearly ninety years after Moana's original silent release. Moana with Sound is now digitally restored, so that the marriage of poetic imagery and sound can finally be properly appreciated.

The film is low-key, to say the least, as it follows the daily routines of a pair of brothers, pre-teen Pe'a and teenage Moana. Together, they help out with their family's hunting and fishing (achieved by actually diving into the water and chasing the fish). At one point, the brothers and their uncle chase a giant tortoise in the water, so they can make ornaments out of its shell (I won't lie: during this sequence, I was praying for the tortoise to get the heck away from them). Moana's betrothed Fa'agase, when she's not hanging out near the hunt, helps her soon-to-be mother-in-law make a lavalava dress out of plants.

Life is much easier on these folks than it was on the Inuits of Nanook, so Flaherty tends to focus on the natural beauty they encounter everyday and their natural offbeat humor. Tiny Pe'a is dwarfed by the giant palm tree he climbs to retrieve coconuts for his brother, who dutifully cracks them open on a nearby tree branch. Later, Pe'a spots coconuts that have been half-eaten by an animal, so he creates a fire to smoke out the culprit. It turns out to be a hungry crab, who himself will end up as supper.

The film culminates in two striking sequences. The first involves Moana performing a traditional Siva dance for a laughing Fa'agase (the drumming in this scene is an excellent use of the added soundtrack). The last is a rite of passage, in which Moana is tattooed all over his body while villagers dance outside his hut. He must withstand the pain to prove he is a man, and the ritual sure does not seem like a piece of cake.

Even without a strong narrative drive, Moana with Sound is undeniably compelling. The images, portraying innocent beauty, and the sensitively choreographed soundtrack are together so unusual that they will consistently keep viewers wondering what to expect next. 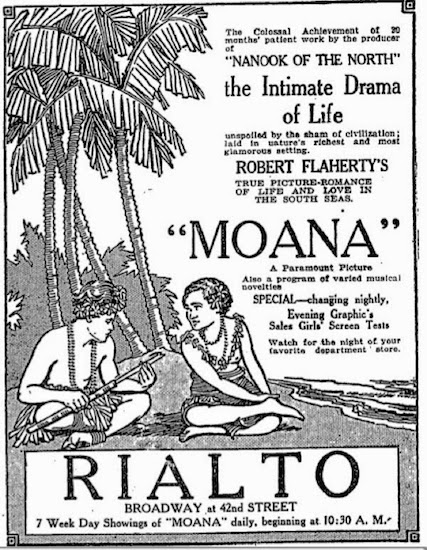 The Video:
Moana has had a troubled journey on its way to digital preservation, and the resulting AVC-encoded 1080p 1.33:1 presentation is not without some inescapable flaws. Certain sections show damage or are muddy from multiple duplications over the years. In general, though, this is a clean and typically sharp transfer, complimented by strong black levels and an above-average range of contrast.

The Audio:
Besides the limitations of the original field recordings, this LPCM 2.0 stereo mix is well-preserved. As I stated above, Monica Flaherty's instincts about how to blend ambience, effects, speech, and singing are uncanny. The quiet moments are as impressively restrained as the more elaborate fishing and hunting scenes are cleverly orchestrated. No subtitles, although the original English intertitles remain.

(HD, 39:56) - Hosted by film archivist Bruce Posner, this is a fairly thorough look into the three main eras of work on Moana with Sound: the original production in the mid-'20s, the recording of the soundtrack fifty years later, and then the twisty path of navigating contracts and collecting elements to finally create the digital restoration almost forty years after that.


Final Thoughts:
A lost classic of the silent era has been revitalized, thanks to the addition of an imaginative and delicately executed soundtrack, as well as a meticulous new digital restoration. DVD Talk Collector Series. 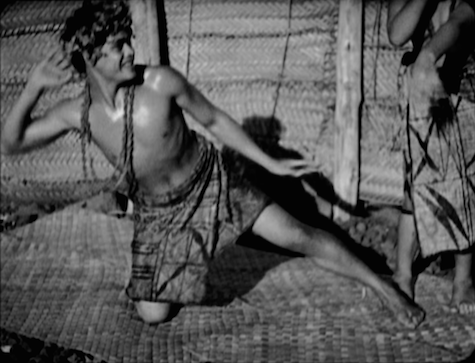