War Between Men and Women, The

In 1969, writer-director Melville Shavelson (he did the original Yours, Mine, and Ours) and writer-producer Danny Arnold (future creator of Barney Miller) worked together on a TV show based on the work of beloved humorist and cartoonist James Thurber, My World... and Welcome To It. The show won an Emmy for best comedy... and promptly went off the air after one season. Shavelson and Arnold's 1972 feature film dramedy The War Between Men and Women seems like it very well could have just been cobbled together from stray notes the writers had for storylines they never got to use on their show. Once again taking Thurber as their inspiration, the pair create a sitcom-ish romance which, as my colleague noted when the film belatedly hit DVD two years ago, is downright reactionary in its view of heterosexual male-female interactions.

Jack Lemmon is playing the Thurber surrogate, Peter Wilson, initially presented as a middle-aged bachelor with a cartoonishly messy apartment to prove it. Wilson loves living alone, almost as much as he hates women, dogs, and children. Wilson's world is thrown for a loop when he meets a charming woman named Terri Kozlenko (Barbara Harris), who -- surprise! -- is a single mother of three and the owner of a pregnant dog. Against his "better" judgment, Peter decides to open himself up to Terri AND her kids AND the dog, proposing marriage. There is trouble in paradise almost immediately because Terri's globe-trotting photojournalist ex Stephen (Jason Robards) decides to make a play for the affection of Terri and the kids. Meanwhile, Peter is slowly going blind thanks to complications from a childhood injury (a detail swiped from Thurber's biography), but he refuses to let Terri know for fear she'll just look down on him and pity him.

As the featured couple, Lemmon and Harris are extremely watchable. Lemmon attempts to be an irascible curmudgeon but mostly comes off like a grumpier version of his usual beleaguered nice guy. Harris meanwhile is like a WASP-y Madeline Kahn, making her character's neuroses much wilder and funnier than I'm sure they were on the page. The kids are well-played too, with Beverly Hills Cop's Lisa Eilbacher as the older daughter who is spending too much time with a no-good boy, My World... and Welcome To It's Lisa Gerritsen as the younger daughter who is wise beyond her years, and The Bob Newhart Show's Moosie Drier as the young son who is generally afraid of everything.

It's hard to find fault with the cast, so it must be the script that occasionally lets them down, with its uneven mix of cartoonish sketch comedy (sometimes illustrated by mock-Thurber cartoon sketches), more grounded verbal humor, and bone-dry dramatic scenes dealing with Peter's failing eyes. Oddly, the actors are so good that oft times the dramatic scenes are far more satisfying than the comedy. I'd much rather spend more time with Peter and Terri seriously discussing Peter's potential blindness than watching a 90-second non-starter of a gag in which near-sighted Peter fishes around in a carafe of iced martinis for the glasses that fell off of his face. Yet even as a fan of the film's more serious moments, I don't know what to make of the climax, in which Peter walks little Lisa Gerritsen through an animated version of Thurber's anti-war story "The Last Flower."

The War Between Men and Women is a sort of half-success/half-failure, and it's probably because of the tone. The film views Peter Wilson as a bitter grump, and as such, the film is more bitter and grumpy than it should be. Instead of emulating Thurber's style of whimsy with a biting undercurrent, the film's attempts at humor are mostly bite -- anti-commitment, anti-wife, and anti-family jokes -- with not enough whimsy to temper it. 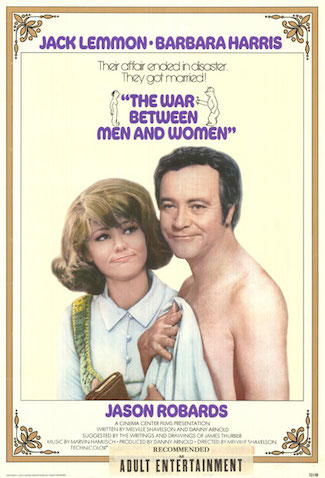 The Video:
The AVC-encoded 1080p 1.85:1 transfer is solid, with good detail reproduction and accurate-looking colors. Some of the optical and animation shots show signs of dirt and debris, but mostly the print is clean and stable. No significant digital compression issues.

The Audio:
The DTS-HD MA 2.0 mono mix is also solid. A few lines of dialogue sounded a bit muffled coming out of my system, but the rest of the sound is undamaged and understandable. No subtitles.

Final Thoughts:
The War Between Men and Women is likable enough, with funny lead performances by Jack Lemmon and Barbara Harris, but its uneven story and antiquated take on male-female dynamics make it unlikely I'd want to sit through this flick again. For a first-time viewing, it comes mildly Recommended.