Blue Underground // Unrated // March 29, 2016 // Region 0
List Price: $29.98 [Buy now and save at Amazon]
Review by Stuart Galbraith IV | posted March 29, 2016 | E-mail the Author
Someone really ought to write a definitive biography or make a film about the colorful, scandal-plagued life of producer Harry Alan Towers. A former syndicated radio and British television producer, Towers was also a procurer for the rich and powerful, operating a vice ring out of New York hotels and servicing movie stars and UN delegates. According to some sources, he even arranged a liaison between Mariella Novotny, his girlfriend at the time, and then-Presidential candidate John F. Kennedy.

Towers was charged in 1961 but jumped bail and fled to Europe. Novotny testified that Towers wasn't merely a pimp but also a Soviet spy using his high-powered connections to extract info beneficial to the U.S.S.R.

Undeterred, Towers switched to producing and writing feature films (in the latter capacity almost always under the pseudonym "Peter Welbeck"), beginning with Death Drums Along the River (1963). Towers had an undeniable knack for and was a genuine pioneer in getting pictures financed via fiendishly complex multinational arrangements, most commonly involving British and West German moneys and talent. Over the years these arrangements became increasingly Byzantine. His The Castle of Fu Manchu (1969), for instance, was a West German-Italian-Spanish-British-Liechtensteiner co-production. To save money while offering name value simultaneously, Towers's movies were often based on famous novels or characters in the public domain: stories by Arthur Conan Doyle, Jules Verne, Robert Louis Stevenson, Marquis de Sade, Bram Stoker, etc. Some of these he remade multiple times.

For most of the 1960s, Towers's movies were generally pretty good. Though exploitation films of one form or another, they were competently made and often better than that. They featured a mix of American and/or British and Continental stars, and often had picturesque locations that sometimes, as here, were places other filmmakers rarely ventured.

But then in the late 1960s Towers began hiring Spanish director Jess Franco and the quality of Towers's pictures nosedived. Even Franco's defenders are pretty much in agreement that his films for Towers are among his worst, which is saying something.

They soon parted company, and for the next several years Towers took a stab at respectability with adaptations of literary classics like Black Beauty (1971), Treasure Island with Orson Welles as Long John Silver, and The Call of the Wild (both 1972) with major Hollywood star Charlton Heston in the lead. A French-British-Italian-Spanish-West German co-production set in the Yukon but filmed in Spain and Norway, it was a typically chaotic Towers film. Heston later recalled, "We're faced with the endless problems of organization, personnel, dogs, publicity . . . I fear I've fallen in with amateurs and con men. This had not been a picture really but a production deal, patched together with incredible adroitness and negotiating skill--and no filmmaking talent whatsoever."

Towers, however, soldiered on, making forgettable junk like Delta Force 3: The Killing Game (1991), The Mummy Lives (1993), and The Mangler. Also in the mid-1990s he teamed up with Michael Caine for two Harry Palmer sequels, and with frequent collaborator Christopher Lee for two Sherlock Holmes TV movies neither terrible nor memorable. Towers died in 2009.

Mozambique and Victim Five (here bearing its original U.S. title, Code 7, Victim 5, both 1964) were Towers's second and third feature films and thus more competent and slightly more ambitious than most of what followed. Mozambique is rather dull but not terrible, and Code 7, Victim 5 is rather entertaining for a ‘60s-style, Eurospy film, mainly thanks to its star, cult actor Lex Barker. That film has video-supered title elements with Blue Underground taking onscreen copyright credit, while Mozambique may never have been properly copyrighted at all. (The title card includes a copyright notice but doesn't identify the owner legally, I least I don't think so, despite another notice at the end.) Both were shot in 2-perf Techniscope and generally look quite good in high-def. 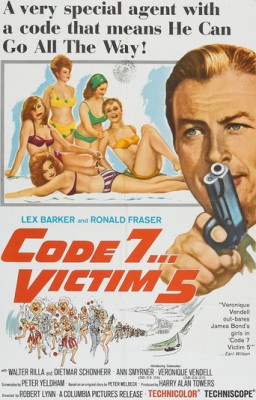 Code 7, Victim 5 is the better of the two, thanks largely to the appeal of star Lex Barker. Princeton-educated and the son of a wealthy stockbroker, the wounded World War II veteran had a minor career in Hollywood until he was chosen to replace the aging Johnny Weissmuller in the role of Tarzan at RKO. Tall (6'4"), blonde and handsome, Barker was an excellent casting choice. What he lacked in Weissmuller's primitive nobility Barker made up with a regality that was actually a bit closer to Edgar Rice Burroughs's image of the character: the orphaned, articulate son of British nobility. He only played Tarzan in five films made over four years, but he's still probably the third-best Tarzan after Weissmuller and Jock Mahoney.

Not surprisingly, after Tarzan Barker found it hard to break away from the jungle genre, and so moved to Europe. He had a small but important role in Fellini's La Dolce Vita (1960) but really clicked in West German movies (Baker spoke at least five langauages), first in several "Dr. Mabuse" thrillers but mainly in a series of excellent German Westerns, adaptations of Karl May stories in which he usually played a mountain man named Old Shatterhand, blood brother of Apache Indian Winnetou (French actor Pierre Brice). These classical, rather than spaghetti-style Eurowesterns weren't particularly popular in the U.S. but a sensation in Europe, especially in West Germany, with Barker appearing in seven of the eleven films.

When the market for such pictures began to peter out, Barker returned to the U.S., but suddenly dropped dead of a heart attack while walking in New York City. He was 54. He remains a cult figure in Germany, despite allegations made in Cheryl Crane's book Detour: A Hollywood Tragedy (1988) that Barker repeatedly sexually molested her from the ages of 10 to 13 while he was married to Crane's mother, actress Lana Turner.

Barker plays American private eye Steve Martin, who travels to Cape Town, South Africa at the bequest of millionaire Wexler (Walter Rilla of the ‘60s Dr. Mabuse films). His butler has been murdered during Cape Town's New Year Carnival, and he wants Martin to investigate. There's some mutual attraction between Helga (Ann Smyrner, Reptilicus, Journey to the Seventh Planet), Wexler's assistant, while the millionaire's daughter, Helga (Véronique Vendell, later in Barbarella) also makes a pass or three at Martin, even though she's sleeping with (Dietmar Schönherr, more prominent in Mozambique) Wexler's private physician, on the sly.

Even en route to Wexler's estate from the airport there's an attempt on Martin's life, which attracts the attention of local Inspector Lean (Ronald Fraser, Flight of the Phoenix), who seems to spend all his time at sunny outdoor cafés, admiring all the beautiful women.

Shot by the great Nicholas Roeg, Code 7, Victim 5 certainly looks great and more expensive than it surely was. Zulu was filmed in South Africa about the same time, but major Hollywood and British studios rarely had filmed there and the scenery is consistently attractive. The script also takes advantages of the locations in interesting ways. There's a long set-piece in an enormous, very impressive series of caverns, and an amusing sequence has Martin and Helga threatened at, of all places, an ostrich farm from which feather duster feathers are extracted.

Smyrner and Vendell are attractive while Towers, with his past experience as a pimp, knew how to pick beautiful women for all the bit and extra roles. Ronald Fraser, with his beady eyes, squat and crooked nose, and baby-like mouth, clearly is having a ball playing a ladies man lawman. A staple of British cinema and television from the mid-1950s until his death in 1997, Fraser was an infamous boozer, holding his own with pub mates like Richards Burton and Harris, Peter O'Toole, and others. 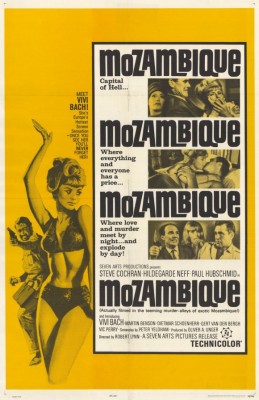 Mozambique, filmed primarily in that East African nation (and still a colony of Portugal at the time), as well as in Lisbon and Zanzibar, is just as competent and picturesque but lacking in other ways. Star Steve Cochran, in his penultimate (not last) movie role, isn't as likeable, nor is its script as intriguing as Code 7.

Cochran is disgraced American pilot Brad Webster, the lone survivor of a commercial plane crash. Out of work and stranded in Lisbon, Webster gets a strange offer of piloting work in Mozambique from Inspector Commaro (Paul Hubscmid, The Beast from 20,000 Fathoms). En route aboard a commercial airliner nervous Nelly Webster befriends (bad) lounge singer Christina (Vivi Bach), who like Webster is going to work for the same man, owner of the exotic Club Valdez.

Upon arrival, however, Webster learns that the man has died, but his assistant Da Silva (Martin Benson), and widow, Ilona (Hildegard Knef), assure Webster and Christina that the business will continue to operate as before. It's not long before Webster realizes he's been sent to snoop on an illegal smuggling ring.

After filming Mozambique, Steve Cochran (White Heat, Il Grido) returned to the U.S., did some guest shots on TV, then starred, directed, and co-wrote the obscure Tell Me in the Sunlight, filmed in 1965 but unreleased until 1967. Soon after, Cochran's rotting corpse was found aboard his yacht, adrift for 10 ten days after Cochran died at sea under mysterious circumstances. Three female "assistants" (Cochran was a notorious womanizer) aboard had no idea how to sail the ship back to port and it finally drifted to shore near Port Champerico, Guatemala.

Cochran resembled a slightly more handsome Sheldon Leonard, and like that actor was usually typecast as gangsters. boxers, surly bartenders, and other urban underworld types. He not bad in the noirish surroundings here, being played for a sap, but he lacks Lex Barker's charisma and onscreen likeability.

Robert Lynn directed both pictures. Primarily a TV director for such programs as The Saint, Captain Scarlet and the Mysterons, and Space: 1999, Lynn was busier as an assistant director on more prominent films, peaking as a second unit director on Superman (1978). Before that, he had worked on a few classics (Black Narcissus, An Inspector Calls), and with Hammer Films as an AD on some of their best productions (Dracula, Revenge of Frankenstein, etc.).

Both pictures are in 2-perf Techniscope, meaning that the increased grain is offset by better depth of field, less distortion, etc. Blue Underground has had a reputation of over-tweaking some of their titles, especially their Techniscope Western and horror titles, but both films look natural and film-like. The audio, DTS-HD Master Audio 2.0 mono (English only, with optional English SDH), is reasonably impressive. Region-free encoded. The lone Extra Feature is a trailer for Mozambique.

Fun pictures partly for their very obscurity but also because they're generally well-made for low-budget thrillers, this double-feature disc is a good value and Recommended.