Taviani Brothers Collection (Padre Padrone / The Night of the Shooting Stars / Kaos), The

Much like their recently released Benoît Jacquot set, the Cohen Film Collection has brought together another triple feature of world cinema classics that are less well-known today in the US than they should be. This time, the focus is on the work of Italian brothers Paolo and Vittorio Taviani, and three of their biggest international successes: the coming-of-age story Padre Padrone (1977), the World War II drama The Night of the Shooting Stars (1982), and the Luigi Pirandello anthology film Kaos (1984). Watched together, these films share a theme of deep sympathy for and understanding of peasant life in Italy, revealed in ways that are charming, funny, shocking, and sad. 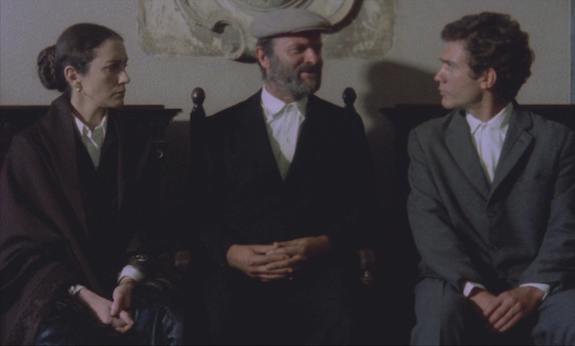 The opening of the Tavianis' Palme d'Or winner Padre Padrone ("Father, Master") makes it seem like we're in for an unrelenting bummer, as we see tiny Gavino (played by Fabrizio Forte at age 6, then Saverio Marconi at age 20) pulled out of his elementary school class by his gruff papa (Omero Antonutti) so that he can tend the family's flock of sheep and start earning money. Gavino's father is a piece of work as well, subscribing to the notion that beating a kid is the same as teaching a kid. Luckily, Padre Padrone is not just a glum serving of cinematic miserabilism, as the Tavianis temper their neorealistic tendencies with slight stylization and welcome interjections of wry humor. For instance, most characters get at least one moment of revealing voice-over, including a fed-up goat who doesn't like being milked and defecates into Gavino's bucket.

The film is adapted from the memoir-novel by linguist Gavino Ledda, and the Taviani brothers clearly respect Ledda. They feature the real man in both the opening and the closing of the film, adding an element of meta-commentary to the proceedings but also perversely making the fiction seem more real.

As it progresses, Padre Padrone becomes an unsentimental story of triumph. Gavino spends his first eighteen years uneducated and illiterate, constantly abused and belittled by his father, but he comes to realize education can be his savior. Once he can hone his mind, he can use it as a weapon to defeat his father and make his own way in the world. His father doesn't go down without a fight, thwarting an attempt to move to Germany and forcing his son into the army. Ironically, the work that Gavino has to put in to learn the vocabulary differences between his native Sardinian language and the Army's standard Italian starts him toward his new destiny as a linguist. As the father/master, Antonutti turns in a multi-faceted performance -- one that becomes more impressive when contrasted with his work in the next two films -- that makes Gavino's father less of an outright monster and more of a confused man who has bought into the notion that the patriarchal order is set and there's nothing that can be done to change that. 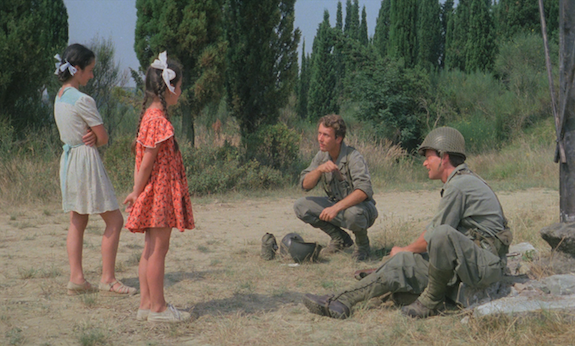 Conflating the Taviani brothers' own personal experiences near the end of World War II with elements of Homer's The Iliad, The Night of the Shooting Stars (aka The Night of San Lorenzo) is less harrowing moment-to-moment than Padre Padrone but it packs in some emotionally explosive turns of events. Framed as the memories of a young girl, the film follows a small band of Tuscan villagers who are displaced from their homes after their town is blown up by retreating Germans. Even though the local bishop has made agreements with the German army so that townsfolk can seek shelter in the village cathedral, one of the locals, Galvano (a far more sympathetic Omero Antonutti), doesn't trust the Germans not to double-cross them all. He proposes sneaking off in the night to find the advancing American troops. It's a risky proposition that ends up splitting up the villagers -- even within some families -- between those willing to seek out liberation and those who are too afraid not just to sit still and wait it out.

Once on the road, the Tavianis reveal hints of the intimate dramas and intermingled relationships of the villagers: some newlyweds already expecting a child, a decades-spanning enmity that masks an even-longer secret love, furtive war-time couplings, and strained friendships.

The film's key sequence comes after our hero travelers have connected up with a band of armed rebels, and they all get into a wheat field firefight with a band of pro-German fascists who have been hunting them. Apart from the striking images it contains, the sequence is also remarkable for how it reveals the way that the World War became a civil war within Italy, as we see villagers try to reason with their former neighbors before shooting it out.

The Tavianis' penchant for poetry and offbeat stylization crops up now and again, such as when the young girl imagines a Blackshirt felled by a dozen spears, but The Night of the Shooting Stars mostly impresses for its unforced naturalism and deeply empathetic attitude toward all of its characters. 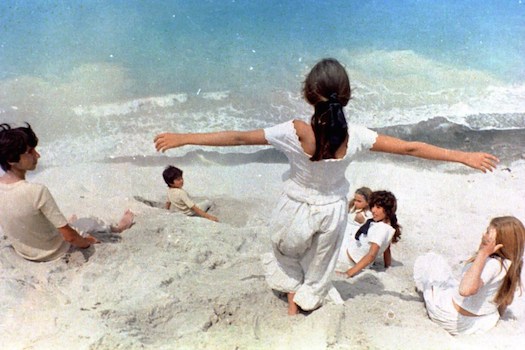 The last entry in this collection, Kaos, is probably the relatively weakest, but only because it arrives on the heels of two outright masterpieces. Here, the Tavianis adapt five stories from Luigi Pirandello set in Southern Sicily, where the author grew up.

The first story, "The Other Son," concerns an old woman whose attempts to contact her sons in America have grown desperate after 14 years. A local doctor offers to write a letter for her but is surprised to learn that she actually has a well-to-do son who lives in the village. The doctor demands to know why she won't just live with this other son, and so she recounts the painful events of her past.

The second story, "Moon Sickness," concerns a newlywed couple whose young marriage is threatened by the fact that the husband was bewitched by the moon as a baby. The hubby therefore goes a bit... animalistic during the full moon. Not full werewolf, mind you, but something in that ballpark. The bride seeks protection (and maybe a little something extra) from her beloved cousin the next time it's her husband's time of the month.

The third story, "The Jar," is the only overtly comic segment in the film. It concerns a rich landowner who invests in a giant oversized jar for his olive oil that ends up broken. He hires a persnickety potter to fix the jar with his "miracle glue," which the potter does easily -- with himself trapped inside. Now the repairman and the rich man must do battle over what is more important: the landlord's property or the worker's freedom.

The fourth story, "Requiem," also concerns a greedy landowner but the approach here is far more elegiacal. A small band of peasants seeks to build a cemetery on the land that they work, rather than have to travel countless hours to find consecrated ground. The founding father of their village is at death's door, making the matter fairly pressing, but the property owner refuses. He sends Carabinieri back with the villagers to make sure that no one gets buried in his ground.

The final story, dubbed an epilogue even though it runs only slightly shorter than the other stories, involves the author himself Luigi Pirandello (played by the clearly versatile Omero Antonutti). Titled "Conversation with Mother," it portrays Pirandello returning to his childhood home after years away, now seemingly worn down by life. He starts a conversation with his dead mother that explores the way people exist inside each other's consciousness before closing on a beautifully realized flashback to a sea journey his mother took as a girl, highlighted by a stop off at a pumice island. The concluding sequence of Pirandello's young mother and her siblings descending a giant pumice hill as though they were floating back to earth contains some of the most intoxicating images captured in this entire three-film collection.

In fact, there is a barrage of memorable images, characters, and ideas floating through Kaos. Divorced from the context of this set, Kaos stands as a sumptuous achievement. But, when viewed as the capper of this informal trilogy, the short story anthology aspect of this film makes it feel less emotionally consistent and dramatically satisfying than the other two films. Art isn't a competition, but as anyone who has made a mixtape knows, context is everything. I look forward to revisiting Kaos some time without the shadows of Padre Padrone and The Night of the Shooting Stars hanging over it. 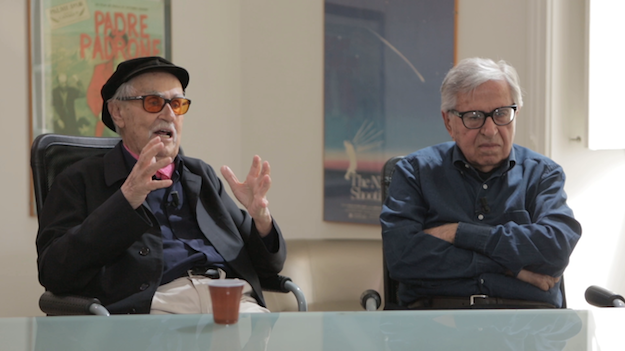 The Blu-ray
The Taviani Brothers Collection is presented on 3 Blu-rays, packaged in a standard-sized BD keep case. The packaging lists erroneous running times for all three films, making it seem like they all hover in the three-hour range, but only Kaos is that long, running 188 minutes (listed, for some reason, as 196 minutes).

The Video:
All three films in the set have been newly restored with varying results. There are no innately digital complaints to be had with the three AVC-encoded 1080p transfers (1.66:1 for the first two films and 1.85:1 for Kaos), but the original cinematography and source elements vary distinctly on the three films. Padre Padrone was shot on 16mm film for TV broadcast, and it looks the roughest of the three. Detail is good, not great; the colors are flat and lifeless (apart from some pretty purple skies); the film grain is fairly chunky. The Night of the Shooting Stars looks the best, with vibrant colors, excellent fine detail, and subtle contrast. Kaos is mostly as strong as Shooting Stars except that sporadically throughout the film, certain medium and wide shots look a bit blurry, as though the image was printed over itself after being scooted over a fraction of a millimeter. At first I thought it was a monitor issue, but I was able to see the same anomaly on different TVs.

The Audio:
All three films are presented with LPCM mono audio (with optional English subtitles). The audio mixes occasionally sound a bit limited but they display no significant defects.

(HD, 1:50:02 total) - Richard Peña and Allessia Palanti from Columbia University sit down with the filmmakers for an in-depth chat about the three films in the set, although anecdotes from other productions inevitably bleed in. Peña and Palanti pose questions that are a bit too theoretical for the more intuitive Tavianis, but the octogenarian filmmakers nonetheless provided thoughtful, elaborate, and entertaining answers to almost all of their queries. Vittorio seems only mildly bitter that Quentin Tarantino took an Ennio Morricone cue from their film Allonsanfan as the end credits music for Inglourious Basterds without asking. 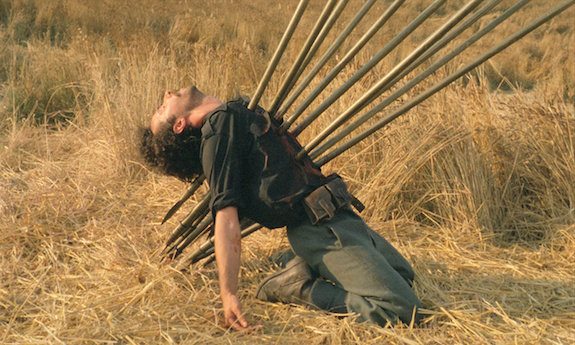