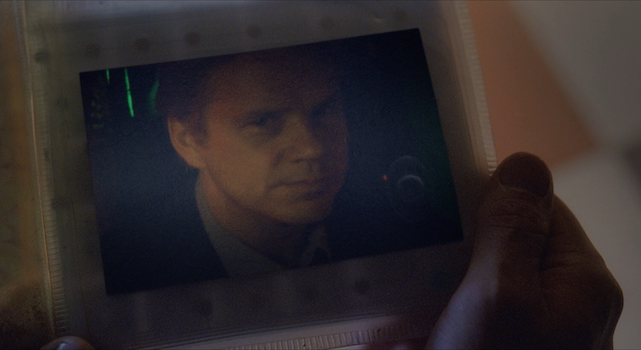 The past decade has been kind to Code 46, the 2003 speculative romance from writer Frank Cottrell Boyce and director Michael Winterbottom (the same team behind 24 Hour Party People -- hey, when's that Blu-ray coming?). The film may have slipped in and out of theaters with little notice and then failed to garner a significant cult following on DVD, but its understated, off-kilter approach to dystopian tropes make it worthy of rediscovery.

Tim Robbins stars as William, a corporate investigator in a near-future world that cosmetically resembles our own. All the countries have seemingly merged, major cities are separated by vast deserts, and all travel is strictly regulated on a genetic basis. The film opens with William on the way to Shanghai, looking to unmask someone unlawfully distributing "covers" (short-term travel visas in and out of cities) to people who are not genetically disposed toward travel. William isn't your average detective; he has been dosed with a specially formulated virus that gives him increased empathy, allowing him to uncover what's really on people's minds when they talk about innocuous stuff. Cue a series of interviews that play out like a more lighthearted version of Blade Runner's Voight-Kampff test, including a funny exchange where an employee admits that she thinks Anne of Green Gables is an erotic masterpiece for freckle enthusiasts.

Being a professional, William finds his culprit: Maria Gonzales (Samantha Morton). But instead of turning her in, he covers for her. He's taken in by her offbeat charm, and she in turn trusts him implicitly. Against his better judgment, married William goes out for a night on the town with Maria. They stop at a karaoke bar, where Mick Jones of The Clash (!?) can be spotted singing along to "Should I Stay or Should I Go" (subtext!) as Maria hands off a cover she smuggled out of work to a grateful young man. The night goes on. Maria and William talk and flirt and eventually have sex, before William takes the morning flight home to Seattle.

Things get messy when that grateful young man whom Maria helped turns up dead. William is sent back to Shanghai to correct his error, but he soon discovers that Maria is missing -- and it may be his fault.

Code 46 explores a fairly familiar tension in dystopian storytelling: illicit love blossoms within a totalitarian state (in this case, the whole world), but can it survive and defy the status quo? The film complicates the situation nicely by making the unseen powers-that-be fairly reasonable in the greater scheme of things. They've created a sleek, homogenous world, but one that is pretty rationally thought-out, making it less overtly terrifying. Characters speak a kind of hybrid English, mongrelized with words and phrases from other tongues (i.e., the travel visas are also frequently referred to as "papeles"), which is charming, until you realize that this probably means the entire world now has a one-size-fits-all culture.

Robbins, with his jocular ordinariness, and Morton, with her semi-mystical daydreaminess, don't initially seem like a natural onscreen couple, but that oddity becomes part of why their characters' love connection plays out more interestingly than the simple bare-bones plot would initially suggest. Morton, in particular, is a fascinating conundrum as Maria, alternately free-spirited and plagued by deep existential anxiety.

Too often, Michael Winterbottom's films lose steam in the third act and just peter out, and that holds true here (although, Code 46 does not downshift as disappointingly as, say, The Claim or The Killer Inside Me). It's not enough of a flaw for me to want to dismiss the movie entirely: days after watching Code 46, I am still fondly replaying all sorts of images and scenes in my head and pondering some of the moral quandaries touched upon in the story. It's not a tidy or perfect film, but it's certainly one worth experiencing.

The Video:
As one would hope and expect with a film as relatively recent as Code 46, the AVC-encoded 1080p 2.35:1 presentation is excellent, with no significant digital compression issues and no distracting print damage. Excellent fine detail and vivid color reproduction. Many scenes are set in a landscape of blue and grey, but even in these moments, the skin tones look lifelike and not bleach bypass-y (is that an adjective?).

The Audio:
Looking through the DVD Talk archives, I see that the 2004 DVD included a 5.1 surround audio track, but oddly the Blu-ray offers just a DTS-HD MA 2.0 stereo track. The film does not seem particularly concerned with immersive audio effects, and nothing seems lost in the mix (especially not the evocative score by the DJ collective The Free Association), so it's hard to get too upset. No subtitles.

Special Features:
Only one of the DVD bonus features has made the leap to the new format: the trailer.

Final Thoughts:
Tim Robbins and Samantha Morton make an unlikely but extremely engaging couple in this unjustly overlooked dystopian romance. The Blu-ray is short on supplements, but the A/V quality is quite strong. Recommended.