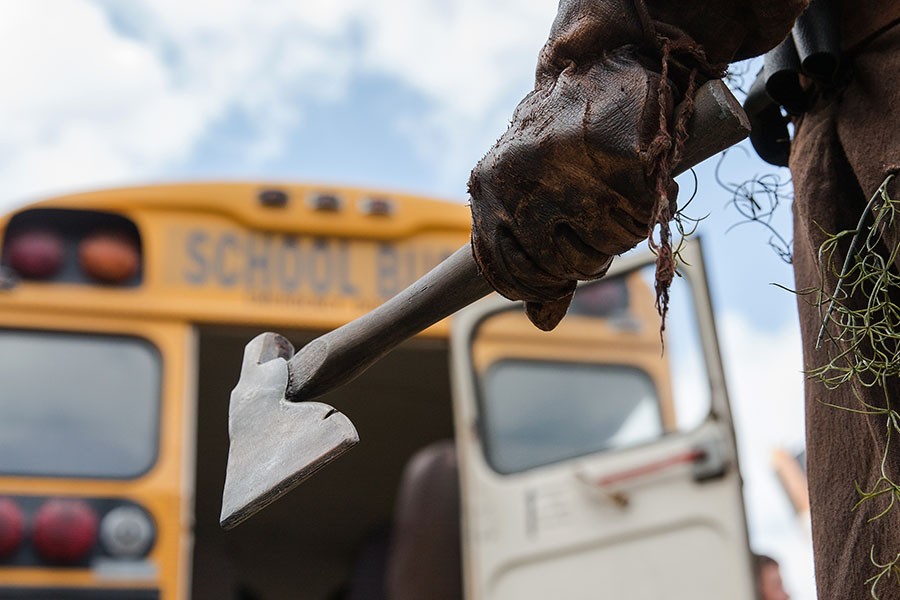 There's campy and then there's campy. Certain horror movies are allowed to be silly, to be over-the-top, to kill off their characters in ridiculous ways. That's the camp that we've come to love, the gore & insanity that comes as a result of certain filmmakers letting their imaginations run wild. The term "camp" comes, of course, from actual films set at camp, where horny teenagers peek into showers, where counselors get it on in the woods, where the adults aren't always as nice as they seem, and where some wacko slowly walks around the woods murdering helpless virgins. That's camp and we love it, at least until it goes too far. It's not really fair, saying that a movie can go off the deep end, but not too much. But that's exactly what I'm saying here to Lumberjack Man, a movie that took the genre to an unwatchable & embarrassing place. 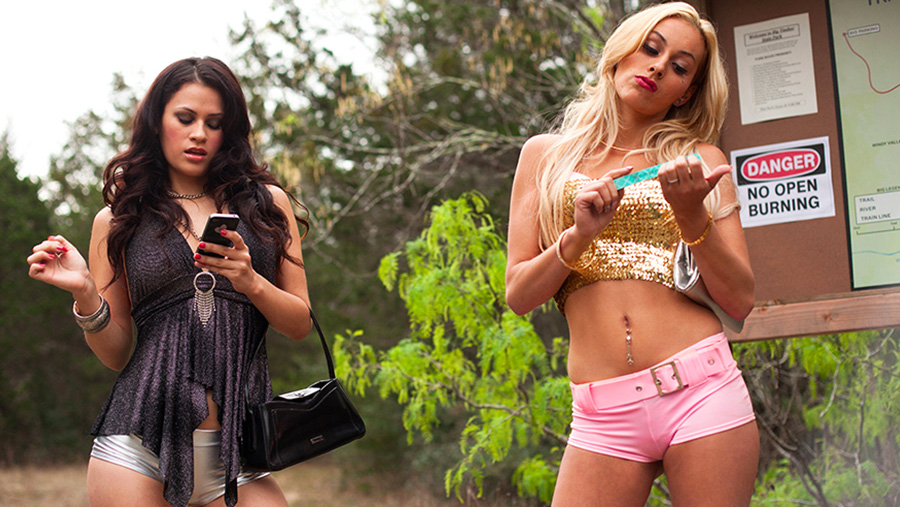 Welcome to Good Friends Church Camp, where God will bless your soul and the Devil will eviscerate your body. Well, not the Devil, some mad lumberjack, but we're getting ahead of ourselves. First, the counselors of the camp need to arrive, set up, and prepare for the arrival of a whole mess of rowdy kids. It's a Christian camp, but not all the staff stick exactly to the religion. Faith sees it as merely a job to do, quoting imaginary scripture to suit her needs, and not seeming to take the whole thing seriously, much to Danielle's dismay. Doug & Theresa, the leaders of the camp, take it all very seriously, and will look to whip the youngsters into shape before the gates officially open. Meanwhile, Jeff & his buddy just want to get a little action, and everyone is feeling excited as another year at Church Camp begins.

But there's still that murderous lumberjack to contend with, let's not forget about him. Some event some years ago & quite nearby has led to the unearthly spirit of an angered woodsman to rest uneasily in his grave, coming out to stalk the campgrounds in search of vengeance. How exactly does he plan to get his revenge, you might ask? Why, by spilling the blood of everyone who crosses his path and pouring it onto a wagon loaded with over-sized pancakes, that's how. Yep, you heard right, pancakes, complete with a giant slab of butter and bloody, home-grown sauce. Everyone better watch out, as the evil lumberjack is on a mission to become some sort of powerful, unstoppable spirit, and he won't let a little thing like summer camp get in his way. With the help of the overly-knowledgeable Dr. Peter Shirtcliff, Faith will fight the demon, both physically and with syrup. 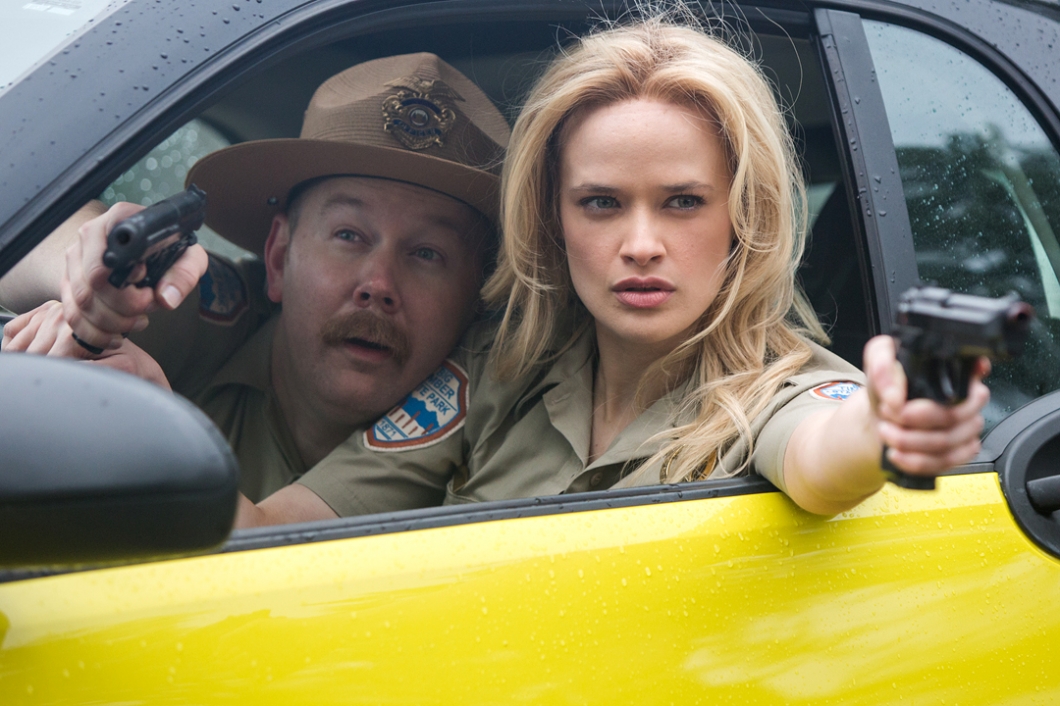 I hope that made some sort of sense, because it was the very best I could do to explain the utter nonsense that is Lumberjack Man. It's a church camp whose festivities are cut short by a ghost (ish) who pulls mega pancakes around and makes sure his victims' blood is spread evenly on top. If that's not the strangest thing you've heard all day, you must be leading some sort of wild life. The premise is just so strange, without much of an attempt to reign things in. Kids smoke pot, have sex, douse themselves in syrup, have food fights. Adults snort cocaine, rub themselves with lotion, sport doofy haircuts, make every bad decision imaginable. Really, Murphy's Law is in full effect here, but with a horror twist; whatever can run off into the woods & bleed will run off into the woods & bleed, regardless of how little sense that makes.

"But it's campy!" some might cry, and I would respond with "but way too much so." It's the genre perverted into something so genre that's it's no longer recognizable as the genre. Make any sense? Well neither does the thought process behind this movie. It's like everyone was on drugs when they made it, complete with the pointless food fight & ridiculous flapjacks. Why did that character just put on a beard costume? Why did those girls just take off their clothes? Why is anyone saying anything that they're saying? The answer is the same every time; absolutely no one knows. The only thing that can be said to this film's credit is that they love campy movies and they try to make one, boobs & blood & bodies & all. But the poor attempt doesn't earn an A for effort from me, turning me off rather than eliciting applause, missing the mark completely. 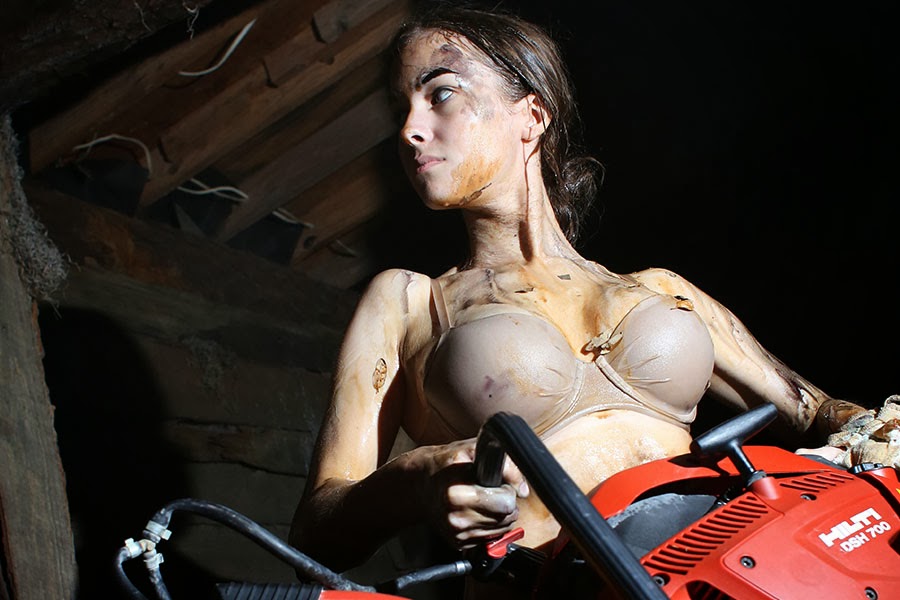 Video: With an aspect ratio of 2.35:1 (letterbox), the video is way down on a long list of bad things about this movie. Worded that way, I guess being toward the bottom of a list like that would be a good thing, and the video isn't the worst thing, that's for sure. The picture quality is fine, low-budget, but not great, and the filmmakers probably assume you don't really care about the clarity of each chop-a-body-into-pieces scene.

Audio: The audio of the film was done in English Dolby Digital 5.1. There are no language options or subtitles choice on the menu. Actually, there's no menu at all, and nothing to do other than pressing play. I guess the sound quality of the movie was fine, since I didn't notice anything good or bad.

Extras: There are no special features on this disc. 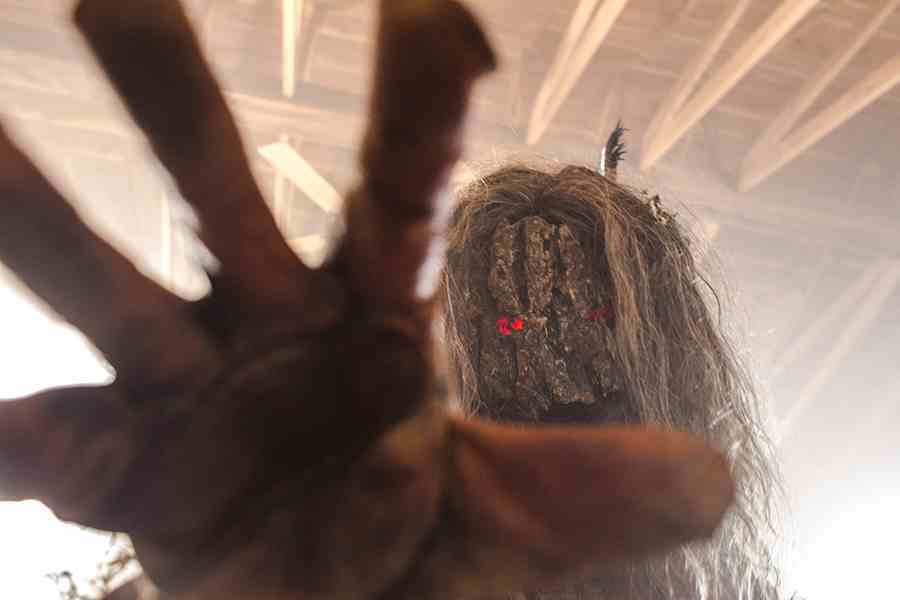 Skip It. I like campy movies, but Lumberjack Man went too far. To someone unused to the genre, they probably all go too far, and to an aficionado, perhaps they can't go far enough. But for me, as someone somewhere in the middle, this film was more joke than serious attempt, coming across as worthless instead of entertaining. Yes it had the typical elements of the genre, but turned into something weirder and more unnecessary that usual. The video was poor to middling, so was the audio, and there were no extras on the DVD. So many other campy horror films exist that are so much stronger, that at least show a little bit of intelligence, and are enjoyable in an offbeat way. You won't find that here, so take my advice and stay away from church camp.