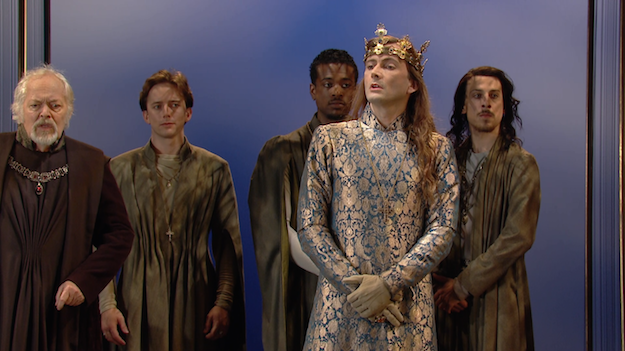 In a few short months, the Royal Shakespeare Company will bring their new production of Richard II, starring David Tennant (aka the Tenth Doctor), to the Brooklyn Academy of Music. It is a revival of their 2013 production of the classic historical tragedy, which was staged on the company's home turf, Stratford-upon-Avon, and which was simulcast live for one performance to movie theaters worldwide. This Blu-ray release is taken from that simulcast, and considering the limitations of the filmed-play format, it delivers a satisfying, dynamic program.

There are some Shakespeare plays that one can dive into without any historical context and just get sucked into the drama. Unfortunately, as a first-time viewer, I found this not to be the case with Richard II. This is not a reflection upon the cast, which is uniformly excellent, or the direction, which is extremely newbie-friendly without feeling dumbed-down. It's the darn source material. The play begins with a first act that is steeped in barely articulated subtext and which intentionally keeps the title character at a distance from the audience. If I was more patient, I might have eventually caught up with the story, but I ended up just re-watching the first thirty minutes of the play with the audio commentary from the Royal Shakespeare Company's artistic director, Gregory Doran. While Doran's comments are more holistic and not plot-specific, I did finally glean what I was initially missing from the opening act.

The play opens with King Richard II's uncle, the Duke of Gloucester, recently murdered. Henry Bolingbroke, Richard's cousin who -- spoiler alert -- will become Henry IV, brings Thomas Mowbray to the king to accuse Mowbray of the murder. Mowbray denies it unconvincingly and seems to be hiding something else (namely, that Richard put him up to it). Mowbray and Bolingbroke decide to resolve their quarrel with a duel, but Richard mysteriously halts the proceedings and banishes both men from England: Mowbray for life (presumably so he can't come back and snitch), and Bolingbroke for a decade.

Fair enough, but then Richard steals Bolingbroke's land and money when his father, John of Gaunt, dies. Needless to say, Henry is not happy about it, and he raises an army to reclaim what is rightfully his, while Richard is off playing war in Ireland thanks to Henry's money. Eventually, the two sides confront each other, and Richard, stripped of his major supporters, is forced to hand over the crown.

In his commentary track, Doran states that Richard II is too often treated nowadays as a "prequel" to the Henry plays that follow it chronologically, and that he wanted to mount a production that allows the tragedy of Richard to stand on its own. It's tricky, and I'm not sure if he totally succeeds. As interesting as Tennant's performance is, starting with Richard as an entitled brat and gradually revealing the warped emotional core of the character, Nigel Lindsay's performance as Henry IV matches him for complexity and moral ambiguity. Richard might get some better speeches, but for much of the play, Henry is the more magnetic character. The exception is the scene where Richard is deposed, having been asked to hand his crown over to Henry as a formality. Tennant's playful petulance, which gives way to barely concealed anger and then recedes again, makes this unusual transaction the most gripping passage in the entire production. As knotty and subtly articulated as the plot might be, it's worth sticking it out, just to get to this beautifully rendered moment. 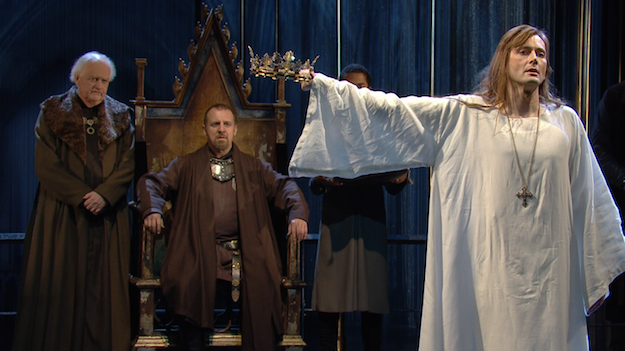 The Blu-ray
The region-free Blu-ray comes packaged with a booklet featuring liner notes in English, French, and German.

The Video:
The AVC-encoded 1080i 1.78:1 presentation has a distinctly video look to it, but apart from minor blurriness during certain camera movements, it looks sharp and detailed. The colors are vivid and saturated, and the blacks are inky without noticeable crushing.

The Audio:
The disc offers two options, a DTS-HD MA 5.1 surround mix and an LPCM 2.0 stereo mix. The surround mix offers more of a you-are-there ambience, meant to approximate the theatrical experience, but because of the decentralized way that the performances have been mic-ed, I actually found the more focused stereo presentation more satisfying. The disc offers English, French, and German subtitles.

- A densely packed talk that covers various aspects of the production, including the performances, the minor alterations made to the original text, and even David Tennant's hair extensions. 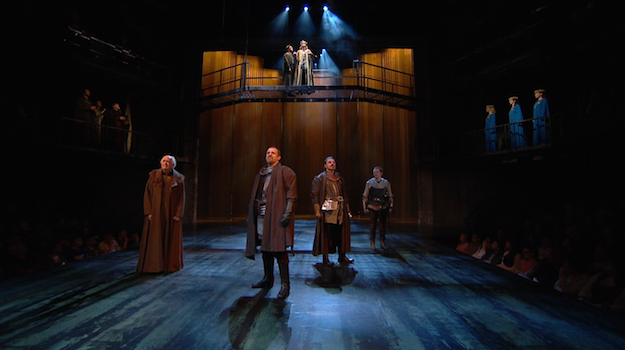