Cohen Film Collection // Unrated // November 10, 2015
List Price: $39.98 [Buy now and save at Amazon]
Review by Stuart Galbraith IV | posted January 2, 2016 | E-mail the Author
Probably like many, I was expecting the Jean Gabin-Alain Delon film Two Men in Town (Deux hommes dans la ville, also known as Two Against the Law, 1973) to be a typically excellent French crime picture, something along the lines of The Sicilian Clan (1969, with both Delon and Gabin), Le Cercle rouge (1970), or Un flic (both with Delon, 1972). Two Men in Town has the expected crime film elements at its periphery but, instead, the movie has other concerns entirely. It's a very impressive if deeply depressing, even disturbing work.

It's also a picture impossible to discuss without giving away key plot elements, so if you're curious about this DVD Talk Collector Series Title film, stop reading here and read the review after having seen it. Spoilers will follow.

Highly regarded in its native France, the film was treated to a 4K restoration in 2014. Other than a couple of extremely grainy moments, possibly inherent to the original release version, Two Men in Town looks great. 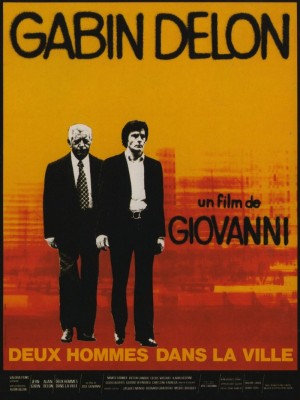 The bleak story has convicted bank robber Gino Strabliggi (Delon) paroled after ten years in prison into the custody of humanist parole officer Germain Cazeneuve (Gabin). Ready for retirement, and on the job since the end of the war, he's unavoidably respected but his belief that career criminals like Strabliggi can ever "go straight" is at best met with haughty disbelief. Days after his release, Strabliggi's girlfriend is killed in an horrific automobile accident caused by joyriders. Strabliggi himself is seriously injured.

Banned from working in France's major cities, Strabliggi, with Cazeneuve's paternal guidance, settles into a small village, going to work for a printing company. His boss (Guido Alberti), who had risked his life printing leaflets for the French Résistance, is impressed by Strabliggi's work ethic. Soon, the childless boss regards the hard-working ex-con as a surrogate son.

Strabliggi's old gang turns up (including, in an early role, a young Gérard Depardieu), but Strabliggi spurns their repeated requests to rejoin them on their next heist. Instead, Strabliggi begins a romance with Lucie (Mimsy Farmer) whom, Strabliggi learns after their first date, works at the local bank.

Aided by Cazeneuve, who helps Strabliggi reveal his dark past to Lucie, things are beginning to look up when the policeman who arrested the ex-con in the first place, Inspector Goitreau (Michel Bouquet) is transferred to the same small town. Vindictive and certain Strabliggi's planning a big job with his old gang, Goitreau mercilessly, obsessively badgers the reformed criminal.

Further, the movie plays up on both Alain Delon's long association with gangster roles and his off-screen troubles, including four months in prison for assault, associations with Corsican gangsters, and his involvement in the Markovic Affair (in which Delon's former bodyguard was murdered, a case still unsolved), all of which leave some doubt in the audience's mind about Strabliggi's sincerity, at least in the early scenes.

Moreover, the basic story - a criminal earnestly trying to go straight in an unforgiving, corrupt world determined to condemn him, whatever his actions - is a longtime staple of movies from all over the world. Two Men in Town had this reviewer thinking about earlier Warner Bros. crime films like Invisible Stripes, the 1939 film with George Raft playing a character quite similar to Delon's.

So, partly, Two Men in Town is like the socially-conscious Hollywood crime films of the 1930s, an indictment against a system in which cons who've served their time are never, ever forgiven or to be believed again, no matter the progress they make against impossible odds. Goitreau's own superior cautions the inspector that he's taking Strabliggi's case personally, that it's clouding his judgment. Yet Goitreau all but wills his bitter enemy to commit a felony, finally threatening to have Lucie fired from her job at the bank, hoping this will finally set him off.

Strabliggi's preordained fate goes from bad to worse. The film finally becomes a treatise against capital punishment, Strabliggi convicted in a grotesque miscarriage of justice. Incredibly France employed the guillotine as late as 1977, but the film may have accelerated France's abolishment of capital punishment, finally, in 1981.

Delon (the film's producer) and Gabin, in their last of three starring films together (the other being 1963's Any Number Can Win) are as magnificent as they are contrasting: Delon edgy, eventually explosive, young and handsome; Gabin old and ruddy, circumspect and relaxed but troubled.

The 1.66:1 1080p transfer of Two Men in Town looks great. A couple of scenes with Farmer are inexplicably very grainy; possibly this was an attempt to rectify a few out-of-focus shots, or maybe the original negative was damaged in those few shots and secondary elements filled the gaps. Mostly though, the film looks great. The LPCM dual mono audio is also excellent; Phillipe Sarde's haunting musical score really delivers, audio-wise. In French with English subtitles.