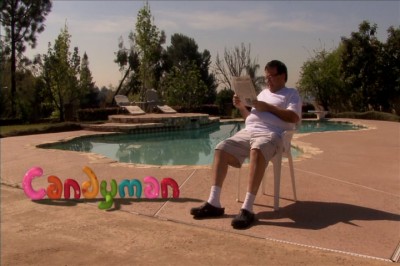 
The Movie
As "Weird Al" Yankovic notes early in Candyman, no one ever really thinks about who invented Jelly Belly, the highly-popular gourmet jelly beans available in a multitude of delicious and, depending on your palette, not-so-delicious flavors. In fact, as you learn in the movie, the official history of the product doesn't once mention David Klein, the wacky character who came up with the idea for the candy, but found himself on the outside looking in as it became a mega-success. Thus it fell to Kiwi director Costa Botes (who brought us the well-received 1995 mockumentary Forgotten Silver) to tell Klein's story (with the aid of producer and participant Bert Klein (David's son.)

Klein is one of the more unique people you'll ever meet in a documentary. A man of amazing enthusiasm and energy, he set in motion the product that would one day become Jelly Belly, and became its mascot, appearing on television shows like Mike Douglas', in costume--as Mr. Jelly Belly--a cartoonish goofball who helped raise awareness of his candy, until business forces behind the scenes, including his own partners and friends, bought the company--the parts he hadn't already given away--out from under him. It's a sad story of betrayal and greed, made all the worse by getting to know the real person it victimized, not to mention his family (with talk of family strife and hints of abuse throughout.) 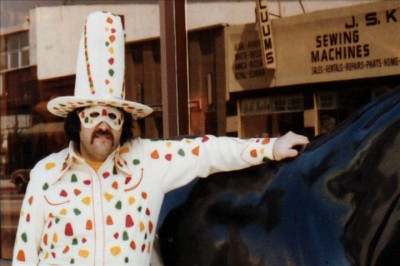 Over the course of the film, through archival footage and photographs, along with some roughly-captured interviews with the Kleins, business associates and industry contemporaries (as well as, for some reason, jelly-bean fan Yankovic, who acts as something of a comedic commentator on the story) the history of Klein and Jelly Belly are laid out, setting up the candymaker's downfall, as well as where his path took him after the pinnacle. The movie takes on the tone of a father-and-son story at times (perhaps betraying Bert's role as producer) but it makes sense since the business affected their relationship. However, the movie is at its best when it is letting David be David, especially when he's being Mr. Gumdrop, a unique persona David took on following the launch of his Jelly Belly. There is nothing like him.

Aside from the use of a moving handheld camera during an interview for no other reason than variety, the movie may be at its lowest power when it sets up David for canonization. It's pretty obvious what Candyman's point of view is--considering it's almost entirely one-sided (whether through intent or a lack of participation on some parties' parts)--but a large portion of the film is all about showing what an amazing and giving person David is to those around him, as a parade of people share the positive effect he had on them. There's no reason to doubt that any of this is anything but true, but it gets to be a little heavy-handed after a while. Sure, it helps sell the narrative, but no one is really doubting who David is at that point. Like eating too many Jelly Bellys, it just becomes too much. 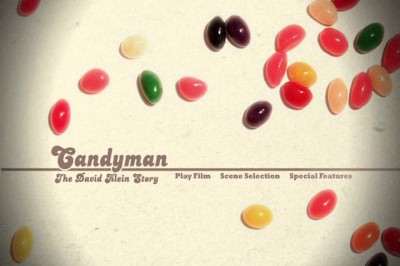 The DVD
The film arrives on one DVD, which is packed into a standard-width keepcase. The disc offers a static widescreen menu with options to play the film, select scenes or check out the extras. There are no audio options, and no subtitles.

The Quality
The anamorphic widescreen transfer is decent, unaided by footage that's often ill-lit, which results in an image that's not quite pleasing, often a touch soft and with color that's muted (along with black levels that lean more toward dark gray.) Stills tend to look rather good, but archival footage shows its age at all turns. When the film is on its game though, it does look quite nice, with a decent level of fine detail, though pixelation is noticeable throughout the film.

The Dolby Digital 2.0 soundtrack is a clean, direct, center-balanced presentation, handling voices and music well, with no concerns about audibility or separation. Nothing particular pops about the audio, but the main song, which appears late in the movie (and on the menus) is crisp and strong.

The Extras
10 deleted scenes, running 30:18 in all, offer a mix of extended footage and cut moments, including almost four minutes of Weird Al (featuring some jelly bean flavor trivia), a look at Dave doing the Jelly Belly Shake, the origin of the Mr. Gumdrop suit and home video of Bert ice skating competitively to the Star Wars theme. Some of these clips were barely connected to the film, so cutting them and offering them separately was a smart move.

Two commentaries are included, one from Botes and one from Dave and Bert Klein. The Botes track is a low-energy affair, during which he does a good deal of narrating what's happening on-screen and tossing in his thoughts on the story as it unfolds (all in that wonderful New Zealand accent.) The track with the Kleins is where it's at though, as you get a great feel of what Dave Klein is all about, with a manic brand of commentary that features a lot of reminiscing, lots of thank yous, and his thoughts on what happened in his past (revealing a few things that didn't make it into the movie, including one completely insane detail.)

A theatrical trailer (1:56) is included, but it's awkwardly constructed. 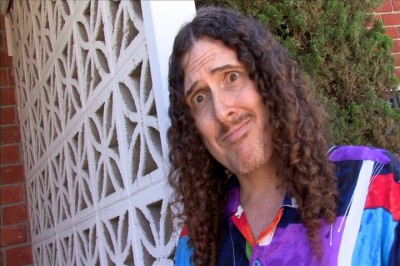 The Bottom Line
Candyman is a sad story we've heard too many times before, as a creative person suffers at the hands of capitalism, but this time the victim is so unique and his creation so ubiquitous that it gives the story something different to offer. The quality of the production however doesn't do many favors to Klein's tale, making it less engaging than it should have been (though the bonus Weird Al is appreciated.) The DVD looks and sounds OK, and offers a nice assortment of extras to check out, making the film more worthy of a look-see than it would be on its own.