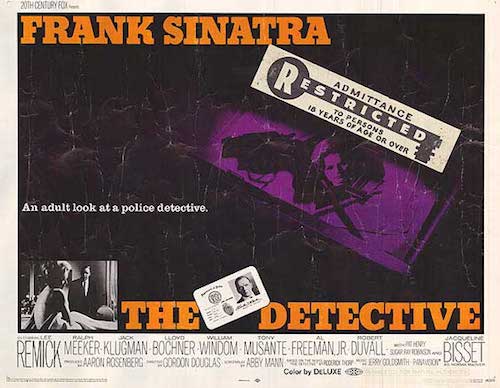 There is no other year in history besides 1968 that Hollywood could have made The Detective. Certainly not in the style it was made. Viewed now, this tale of a New York cop investigating the grisly murder of a gay playboy is both humorously antiquated and surprisingly edgy at the same time. Aging mega-star Frank Sinatra provides the old Hollywood cred as Joe Leland, a cop with smarts and integrity, while the proto-Law and Order: SVU milieu provides audiences with something they hadn't quite seen before. This was a moment when the long-standing production code was in shambles, the ratings system was not yet in place, and audiences were in the mood for films that could provide them "adult themes." That means that the then-groundbreaking and only somewhat misinformed discussion of homosexuality in this flick was mostly a gimmick to get butts in seats. Hence the film is a fascinating half-progressive relic, but one that boasts a surprisingly strong central performance from the underrated Sinatra.

Before checking out Twilight Time's great-looking new Blu-ray, I had only known of The Detective from clips that appear in the 1995 documentary The Celluloid Closet, which discusses the portrayal of homosexuality in Hollywood movies. The film was invoked in a section exploring the vision of gays as either victims or mentally unbalanced predators; The Detective offers a little of both. The opening of the film is a quiet, dry exploration of a crime scene, as Sinatra's Joe Leland glumly noses around the wealthy victim's apartment and examines his dead body. He flatly rattles off to a younger colleague the many inflicted injuries that still needed to be coyly kept off camera, most notably the removal of the victim's penis (Leland notes it is now located on the floor elsewhere in the room). Many of the other cops, including Robert Duvall as a sourpuss named Nestor, are sickened, both by the ugliness of the crime and what they see as the ugliness of the victim's lifestyle. Leland, on the other hand, is low-key and accepting, telling a disgusted colleague, "I've got my own bag."

Leland's contradictions, and Sinatra's, make the lead performance here undeniably compelling. The story of a good cop bristling against his closed-minded and corrupt colleagues is beyond familiar at this point, but Sinatra effortlessly expresses the way Leland's loyalty to traditional attitudes and to his department fights with his common-sense humanism and sense of justice. In his personal life, Leland has trouble reconciling with the fact that his professor wife (a magnetic Lee Remick) is compelled to sleep around, so his traditionalist side makes him leave her. But Leland can't reasonably be so oblivious to the workings of the human libido, because this is the same guy who figures out the best way to get his prime suspect (Tony Musante) to open up during interrogation is to start flirting with him. Maybe it's sloppy writing, but these conflicting details work to make Leland a more intriguing, more fully rounded rogue cop than someone like Dirty Harry or Bullitt. 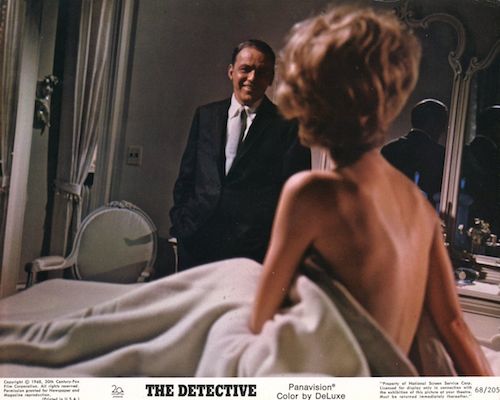 The crime-of-passion murder case seemingly wraps up in the middle of the film, so Leland moves on to the suspicious suicide of a CPA, at the behest of the accountant's young widow (Jacqueline Bissett). No one will be surprised to find out that her husband was indeed embroiled in a conspiracy with some powerful folks, and viewers will be even less surprised to find out that this second case is also tied into the "solved" first case.

The Detective is incredibly entertaining, both for some of the right and some of the wrong reasons. The actors are solid overall (apart from an over-the-top Musante and a sometimes flat, clearly green Bissett). The capable supporting cast includes familiar faces Ralph Meeker and Jack Klugman, the latter of whom you can tell is supposed to be Jewish because he keeps saying things like "Oy Vey!" and his wife (Renee Taylor) tries to overfeed him and his guests at every moment. The mystery plots are plenty interesting, as is the romance between Sinatra and Remick. There's just a residue of phoniness that keeps pushing the film into camp territory now and again. At one point, Leland's chief uses the phrase "eat turd," a cleaned-up version of "eat shit" no human has ever used, let alone a tough cop. In another improbable exchange, Leland is propositioned by a young junkie hooker, who looks like she just came from the beauty salon. On the trail of their suspect, the cops raid some truck trailers where fellas of a certain persuasion were known to hook up; when they open up the cargo door, it looks like a fully clothed sweater snuggle party in there. I laughed for ninety seconds straight.

Yes, the script by Abby Mann (Judgment at Nuremberg), based on Roderick Thorp's best-seller, is silly almost as often as it is smart. And sure, hired-gun director Gordon Douglas (Tony Rome) is sometimes flat-footed in his staging. Clearly, he's just there to make Sinatra look good. But here's the thing: whenever Douglas shoots our star head-on, looking into the lens, complimented by Lee Remick doing the same thing, their blue eyes shining at each other like something out of a dream, all these other flaws can be forgiven. The Detective is an excellent star showcase for Frank Sinatra, revealing surprising depth in the midst of a sometimes shallow story.

The Blu-ray
The Detective comes in a limited edition of 3000 copies. The disc is packaged with a color booklet featuring an essay by Twilight Time's Julie Kirgo.

The Video:
This AVC-encoded 1080p 2.35:1 transfer is quite striking. The image is free from dirt and damage. The level of detail is way above average. Colors are vibrant and lifelike, while the contrast is subtle and attractive.

- Del Valle is a recent addition to the Twilight Time commentary crew, and he is a welcome one. His depth of Hollywood knowledge rivals that of his co-commentators, but his approach is chattier, more gossipy and a bit more tangential. This makes the discussion immensely entertaining, if sometimes a little unfocused. Sinatra is consistently praised. Lee Remick is admired and missed. Director Gordon Douglas is torn down and then somewhat rebuilt (he did direct Them!, after all). Definitely worth a listen.

Final Thoughts:
A committed, conflicted performance by Frank Sinatra is the main appeal here, although the film's outsider view of New York's gay culture also provides some campy unintentional laughs. It's a little too silly to be great, but it's entertaining from start to finish. Recommended. 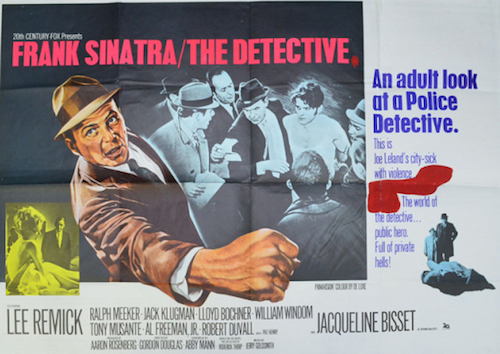