Dark Sky Films // Unrated // January 5, 2016
List Price: $29.98 [Buy now and save at Amazon]
Review by Michael Zupan | posted January 10, 2016 | E-mail the Author
I don't know how the rest of you feel, but I thought 2015 was a pretty lackluster year for horror. I was anxious to see Sinister 2, but the filmmakers veered away from the original's restraint to deliver the same cookie-cutter bullcrap I wanted to get away from. After 8 years of talking about film projects that never came to fruition, Eli Roth returned with not 1, but 2 new feature films. Unfortunately, both The Green Inferno and Knock, Knock only served to remind me how overrated he is as a filmmaker. Paranormal Activity: The Ghost Dimension promised to finally show the stuff that's been hidden throughout the last five films… but, you know, too little, too late. Oh, and the Poltergeist remake? Killer film… as in, its poor performance killed the budgets of future genre flicks, such as the theatrical rendition of Stephen King's IT. You might say, "What about Bone Tomahawk?!" I loved that slice of indie pie, but that's not a horror film. The only saving grace for me last year was It Follows, and if we expand this conversation to television, Ash vs. Evil Dead. That said, I'm not omnipotent. I can't be everywhere at once, nor can I see every movie that's produced. I have some catching up to do, and that effort began with Deathgasm, a New Zealand based horror-comedy that aims to mix heavy metal with buckets of blood. 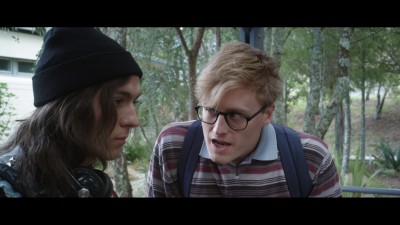 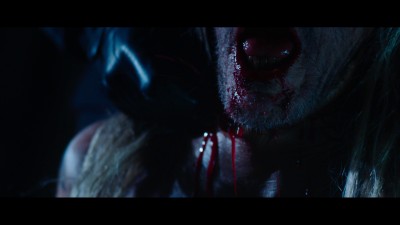 My interest was piqued because yes, the trailer looked fun, but also because I was curious to see how director Jason Lei Howden would pull it off. And this has nothing to do with Deathgasm being his directorial debut, by the way. After all, the best this genre has to offer routinely comes from independent filmmakers. That said, tackling horror and metal in the same film is a dicey way to get your career off the ground. These genres are natural bedfellows, but they tend to come with the most loyal, die-hard fans in their respective industries. If he failed to appease horror buffs, he'd be screwed. If he misrepresented metal heads? Well, I'm a metal guy myself, so if he couldn't convince me, I knew the legions of devil horned head bangers behind me wouldn't buy it, either. And as if that wasn't risky enough, the director decided to make this a comedy. There's precedence for humor in metal, don't get me wrong - see Austrian Death Machine, a band inspired by Schwarzenegger's notable one-liners - but generally speaking, it's an art where album covers can put the goriest horror flicks to shame. Playing things serious would have been safer, but I respect Howden for going balls to the wall.

Especially since it worked. Well, mostly. 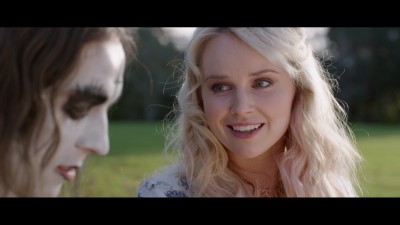 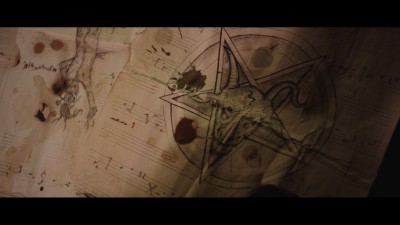 Now, if you were worried the director's take on metal would feature references to Linkin Park or Five Finger Death Punch, you can breathe a sigh of relief. There are nods to Cannibal Corpse, Cattle Decapitation, Anal Cunt, and Trivium (their music doesn't do much for me, but they're amazing live), and we even get to hear a little Emperor and Ihsahn. It would have been nice if the soundtrack was more robust, featuring the very bands the film's protagonists have come to idolize, but I understand why they weren't included. Instead, various other bands were tasked with providing all the thrashy riffs, guttural growls, and finger possessed solos metal fans crave, and man, they deliver with an almost malicious glee. Pathology, Lair of the Minotaur, Nunslaughter, The Wretched End, Bulletbelt, and more? Yeah. Sonically, we're in good hands.

The plot itself is a mixed bag, but it works. Brodie, our main protagonist, is sent to live with God-fearing relatives after his meth-head mom is sent to jail. He's treated like crap because they perceive his love of metal to be a form of devil worship. So, naturally, he forms the band Deathgasm and uses his aunt and uncle's garage for practice. Anyway, new friend Zakk convinces Brodie to break into an abandoned house, where they obtain sheet music for what might be an unreleased track by Rikki Daggers, a metal icon who's been missing for years. Brodie translates some ominous text scrawled in the pages of the Necronomic… er, The Black Hymn, and finds something about a promise of power and wealth to those who play the tune. Not thinking about what the ramifications might be, Deathgasm crank their amps to 11, play what they believe is a Daggers original… and open the gates of hell. 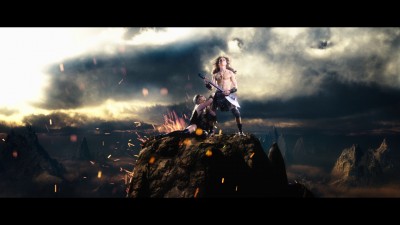 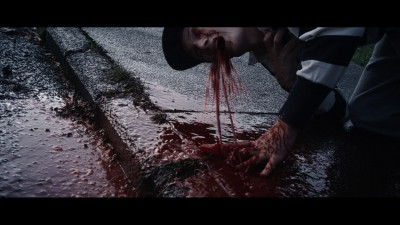 Yes, this premise is silly, but ultimately complements the comedy/horror vibe the director was aiming for. And to a certain degree, this setup pays homage to the likes of Dead Alive (Braindead) and The Evil Dead. Hell, at times, the practical effects and gory gross-out humor even reminded me of something Troma would have done (with a larger budget though, of course). And speaking of effects, this film doesn't disappoint. There's a couple of missed ‘money shot' opportunities, but there's more than enough vital fluid pouring out of every orifice to satisfy a genre fan's bloodlust. The squeamish really need not apply, because I mean EVERY orifice. For everyone else, there's a lot of gooey fun to be had.

Still, as fun as this film may be, there's a couple of subplots I could have lived without. One regards the budding romance between Brodie and Medina, his jackass of a cousin's girlfriend. He turns her on to metal and she loves his non-conforming ways, but we can see their relationship steering towards the rocks from a mile away. While this makes for better overall character development - again, ensuring nobody came off as one-dimensional heavy metal parodies was paramount - I'm not convinced it makes Deathgasm a better film. Frankly, their quarrel tends to slow things down, even in moments where vigilance and perseverance should be their utmost concern… you know, so demons don't gnarl their faces off. This might have been some sort of nod to Shaun of the Dead, but it just doesn't blend as well as it should.

I'll take it over the ‘dark cult trying to rule the world' device, though, because it adds absolutely zilch to the film. "That's preposterous. It has to service the story in some way, shape or form, right?" Wrong. Howden, who was also responsible for the script, could have Sharpie'd this plot thread out of existence, and it wouldn't have made a bit of difference. In fact, it barely would have impacted the overall runtime. 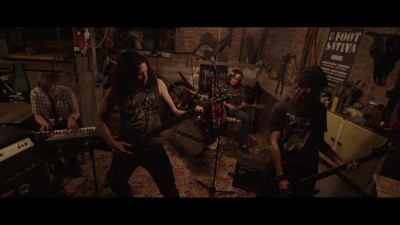 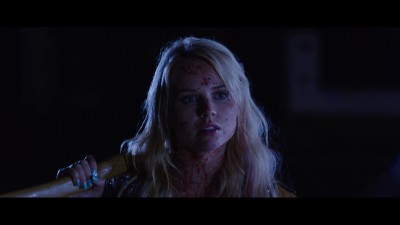 But that's not to say these issues ruin the film. Far from it. Deathgasm may have its flaws, but it's well cast, well shot, well directed, and thoroughly entertaining. Nobody's walking into this film expecting it to be as timeless as Halloween or as profound as The Exorcist. No, they're expecting gobs of goopy red stuff to paint the walls of splatstick central, and that's precisely what's been delivered. Your appreciation for this film may be heightened as a metal fan, but even if you're not, you're still looking at an above-average genre flick which, while not great, stands head and shoulders above most of mainstream Hollywood's offerings in 2015. 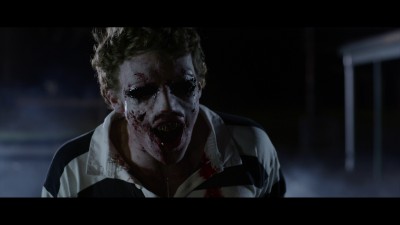 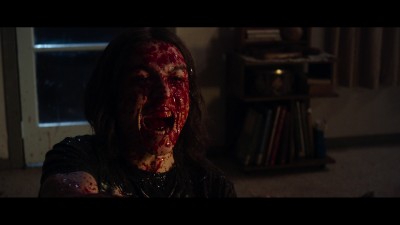 This encode, much like the film itself, is semi-flawed but still manages to impress. Encoded with AVC (2.35:1) at a resolution of 1080p, I'm inclined to think the minor issues on display are inherent to the sources used throughout production, of which there were multiple. Some shots appear softer than they should, or produce a small amount of blocking that can only be noticed when the feature is paused, but everything from a cell-phone on up was used, so that's understandable. These moments aside, Deathgasm looks quite good. The image is often sharp, the detail immaculate, and colors and black levels are replicated with ease. Some might be tempted to just grab the DVD when they see it at Wal-Mart - who, by the way, are selling this film under the name of ‘Heavy Metal Apocalypse' - but trust me, you'll want to hold off for the Blu-ray. The film has highly stylized fantasy sequences that were inspired by metal, and a lot of work went into making sure the intended atmosphere is consistent throughout the feature's runtime. You'll definitely want this disc for the best experience.

Simply put, the 5.1 DTS-HD Master Audio track just SLAYS. I was expecting a modest amount of environment ambience, and I half expected the metal tracks would sound ‘good' and not ‘great' - as can often be the case, since lesser known bands don't always have the best recording conditions at their disposal - but man, I was blown away. Sound effects are appropriately represented throughout the entire soundstage at any given time. There's plenty of moments in Deathgasm that produce gratifying low-end rumbles, and double bass kicks on the soundtrack not only thump, but seemingly aim to make your entire house crumble. Without a man cave to call my own, I probably would have made some uptight neighbors VERY upset. Last but not least, all the dialogue is clean as a whistle. The lossless track on this Blu-ray is reason enough to grab the HD version of this film, period.

-Commentary: Writer/Director Jason Lei Howden - One thing that typically makes me dread going through commentary tracks, is the possibility of lots of dead air. Howden actually understands this, but still struggles to fill more than a few gaps. Still, when he's actually providing information, he's engaging and on-point. If there was ever any doubt that Deathgasm was being treated as a passion project as opposed to just another film, you won't feel that way after hearing him talk about his directorial debut. He goes into everything from conception through the entirety of the film's development. It'd be a mistake for fans to miss this track, for sure.

-Brotherhood of Steel: The Cast of Deathgasm - This short featurette focuses on Milo Cawthorne, James Blake and Kimberley Crossman, who play the three most important characters in the film.

-Demonseed: An Interview with Jason Lei Howden - If you can't justify sitting down to hear Howden's commentary in full, this short featurette will be your best bet. It doesn't provide as much information as the commentary, of course, but Howden does a great job of delivering the broad strokes in a roughly five minute window.

-Gorgasm: The Effects of Deathgasm - There's a LOT of great practical effects in this film, and this featurette will take you behind-the-scenes on how the most notable stuff was done.

The covert art for this Blu-ray is also reversible, for those who want something that looks a bit more ‘metal' than the marketing poster that faces the consumer from retail shelves. 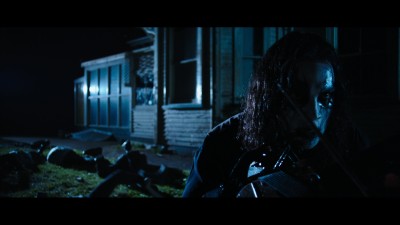 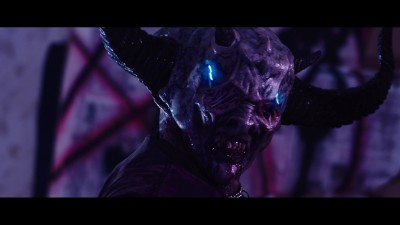 The internet is loaded with hyperbole, so I wasn't surprised to see so many hail Howden's directorial debut as the second coming of Pazuzu. I wouldn't go that far, but those who keep their expectations in check will undoubtedly find Deathgasm to be a fun, metal-fueled romp through one of the goriest demonacalypse setups we've seen since the Evil Dead reboot in 2013. If you felt Hollywood failed you on the horror front last year, I encourage people give this film a whirl. It isn't perfect, but it's on point with all the important stuff: Blood, guts, and METAL! Recommended.