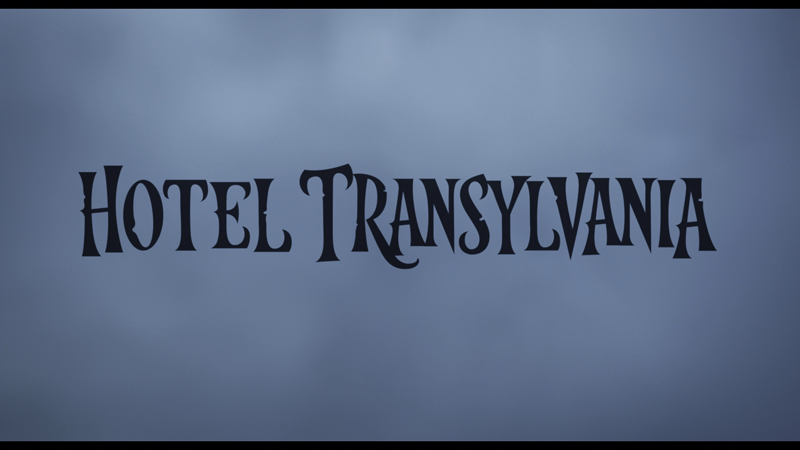 The Movie
If you came to me with a film telling me it starred Adam Sandler, Kevin James and David Spade, there's a good chance that we could come to blows. That's a lineup that just doesn't promise a good time, as their recent films have proven repeatedly. However, keep them confined to the voiceover booth (though Sandler does co-write with Robert Smigel), surround them with an hugely funny cast and put them under the supervision of an animation genius like Genndy Tartakovsky and suddenly they aren't so bad. That's why Hotel Transylvania 2 didn't get dropkicked through the window. That, and my nine-year-old's excitement for watching it.

Settled in with her to watch, the story gets rolling quick, picking up from the end of the first film, when Dracula (Sandler) accepts that his daughter Mavis (Selena Gomez) has fallen for a goofy human named Jonathan (Andy Samberg). Moving quickly through several jumps forward in time, Mavis and Jonathan have now welcomed a child into the world, Dennis (or Dennisovitch, as grandpa Dracula calls him.) The problem for Drac is, Dennis seems to take after Jonathan, and apparently isn't a vampire, having not grown fangs. This could be a major disappointment for grandpa, but he decides that Dennis is a "late fanger." So, after sending Mavis and Jonathan on a trip to visit his human parents (played in limited time by Megan Mullally and , Dracula takes his buddies Frankenstein (Kevin James), Wolfman (Steve Buscemi), Murray the Mummy (Keegan-Michael Key, taking over from Cee-Lo Green), the Invisible Man (David Soade) and newcomer Blobby the Blob, on the road to try to encourage Dennis' vampire side to come out. 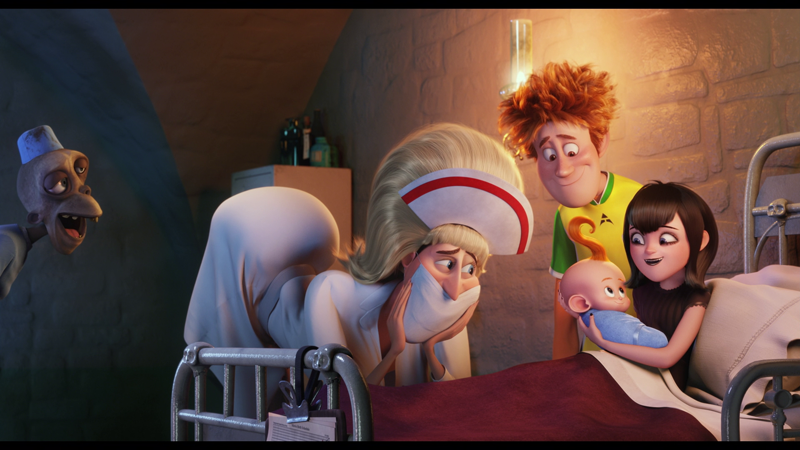 The film is loaded with goofy jokes and silly stunts, essentially delivering a kiddy version of a Sandler film, specifically his Grown-Ups movies, as the monsters find that the world around them has changed, with scary areas being gentrified, family traditions being left behind and mixed marriages becoming the norm. Oddly, once you get past the comedy of Drac and his pals, the film almost feels like something of a cultural/political statement (likely Smigel's influence) as Drac's father, Vlad (the great Mel Brooks doing his Catskills best) is a traditionalist who doesn't believe in humans and monsters living in peace, while his aggressive henchman Bela (Rob Riggle) could be a stand-in for fundamentalists willing to commit violence in order to maintain purity. This is heavy stuff for a kids cartoon, and leads to some frights, but it's mainly the set-up for a big Looney Tunes-style brawl, as the film knows its audience and plays to them, offering pat solutions to legitimate problems.

Returning for the sequel, Tartakovsky manages to bring some of the exaggerated, angular style of his 2D cartoons, which made series like Dexter's Laboratory and Samurai Jack so unique, to the more natural CG animation of this franchise. When putting such techniques up against the deeply detailed CG animation, it enhances the effect of every stretch and squish. This comes across most clearly with Drac, whose head and body are often twisted in order to illustrate how the situation with Dennis, his daughter and his father have stressed him out. Past experience with fast-paced shows like Samurai Jack and Powerpuff Girls has also made him an expert at depicting action, whether it's Mavis' high-flying acrobatics or an all-out battle scene, while the creativity on display in the sets and monster designs (as well as the humans) is impressive.

Hotel Transylvania 2 is a rather basic comedy, never approaching the quality of a Pixar film. Lacking in the subtlety and over-the-kids'-heads jokes of the best family entertainment, it's going to mainly appeal to younger viewers far more than adults. That said, there's always something happening, and the performances are uniformly solid, as Sandler does some of his best work in years as Drac, while Gomez and Samberg are both fun. As a result, though it may not elicit much in the way of laughter, it's never boring. Though personally it wasn't a favorite, Hotel Transylvania 2 has been playing frequently here, and it's rare that my daughter will watch a feature-length film multiple times, so it's obviously struck a chord with her. 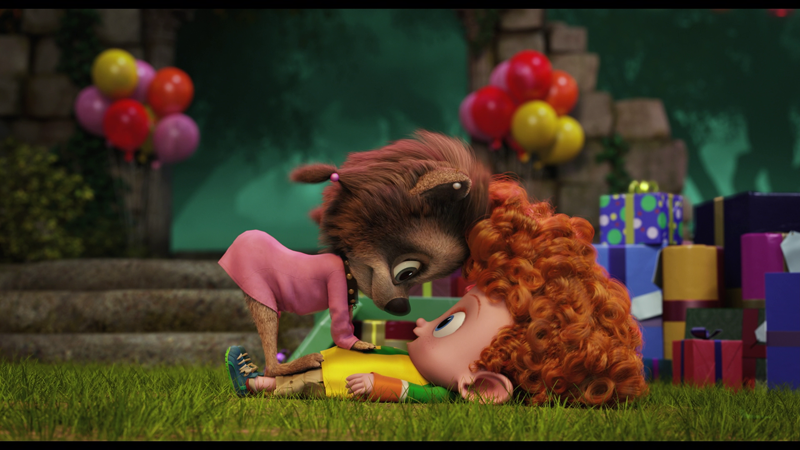 The Discs
This release arrives in a two-disc set (one Blu-ray, one DVD) packed into a standard-width, dual-hubbed Blu-ray keepcase with a slipcover that repeats the cover art. The disc's static menu (hosted by a soundalike for Murray) offers a choice to watch the film, select scenes, adjust the setup and check out the special features. Audio options include English 5.1 DTS-HD Master Audio, English and French 2.0 Descriptive Service and French and Spanish Dolby Digital 5.1, but subtitles are available in English, English SDH, French and Spanish.

The Quality
Watching this 1.85:1, 1080p, AVC-encoded transfer is a real treat for the eyes, as the quality of the presentation is matched by the quality of the animation. Lush, properly saturated colors are seen throughout the film, while the level of fine detail in this crisp image borders on ridiculous, with the smallest bits of info looking crystal clear (and with the texture work in this movie, there's a lot to enjoy.) Black levels are deep and stable (a key for a movie that lives mostly in the dark), and digital distractions are nowhere to be found. It's just a stunning transfer that gets plenty to work with from the animators. In one scene, water swirls up into mist, and the effect is outstanding, while another mimics the look of a fabric puppet perfectly. Fantastic.

While not the reference-level element the image is, the DTS-HD Master Audio 5.1 is a lot of fun nonetheless, an active affair that takes advantage of the side and rear speakers to push effects and music throughout the sound stage, with excellent movement and positioning, giving the film a solid sense of surround sound. Dialogue isn't ignored, sounding clear and well-separated from the rest of the sound, while the low-end is put to work in the music and sound effects, giving the proceedings a good deal of punch. Between this and the transfer, this disc is an impressive outing.

The Extras
The extras kick off with some Blu-ray exclusives aimed at kids, starting with "Monster Lullaby Scary-oke SIng Along with Dennisovitch!" (3:57) The three songs, brief monster-themed variations on classic lullabies, are presented and sung (with on-screen lyrics), by the film's lead kiddo, with art and clips from the movie. Though the songs are brief, you'll find yourself wondering just when (or if) "Twinkle, Twinkle Little Bat" will end.

"Throw the Ultimate Monster Party!" (5:45) offers a video guide for throwing a Hotel Transylvania themed party, including directions for making bat garland, a Frankenstein Punch and Mini Kakie Cakes. Unlike a lot of similar guides, these ideas are pretty easy to pull off, but they will require gathering supplies you probably don't have lying around, despite what the video tells the kids watching.

Seven deleted scenes are available, individually or in a 17:53 reel, including two alternate openings, a scene with Drac's gang in jail and a flashback to a young Dracula at camp. The scenes are a mix of animatics, rough renders and clips that ended up in the film in other locations, with the best being Murray accidentally reanimating a rather amusing person, along with the alternate introduction of Vlad, as you get to enjoy a bit more Brooks.

Back to the kiddie stuff, we get "Make the Scary and Silly Sounds of HT2" (6:24), with Sony foley artist Robin Harlan. Though it's certainly aimed at younger viewers, it's definitely interesting to see how several of the film's sound effects were achieved.

The Blu-ray exclusive extras conclude with "How to Draw Your Favorite Characters" (5:04), in which Asher Blinkoff (the voice of Dennis), learns how to draw Dennis and Dracula, from the film's Production Designer, Michael Kurinsky, while "Meet the New Characters - Animation Progressions" (7:17) allows Kurinsky, Tartakovsky and Visual Effects Designer Karl Herbst discuss how the film's new character designs came together during pre-production, providing plenty of insight into the animation design process and the concepts in the film.

For those picking up either the Blu-ray or DVD, there's an impressive array of extras, starting with a pair of feature-length audio commentaries. Up first is Tartakovsky on a solo track, who naturally focuses on the technical side of the film, discussing animation (and comedy) technique and story points, including talk of how scenes changed over the course of the production (like ideas that were cut) and the challenges CG animation gives to animators looking to introduce more style, as well as the influence of his aborted Popeye project. Though there are a few dead spots, the perspective Tartakovsky offers is excellent for animation buffs. The other track features Sandler and Smigel (joined later by an un-mic'd Allen Covert.) This loose track goes all over the place, from an appearance by Dracula to more talk about kids than a PTA meeting, to production info, joke credits and criticism from Sandler, it's an active commentary that will entertain Sandler fans, but one wonders if the fact that it's a kids movie held the participants back a bit (they directly address any kids listening at some points.) The best part is when Brooks' appearance in the film sets the trio off on a fanboy spree of reminiscing about the legend's films and his influence on the three men.

A music video for girl group Fifth Harmony's tie-in song "I'm in Love with a Monster" (3:42) lets the ladies play glitzy ‘60s dress-up with some low-budget monsters at a spooky hotel, while the footage is intercut with clips from the film. The song is catchy enough to stick in your head for a little while after.

A "Character Sketch Gallery" offers a nice assortment of 92 pieces of art from the film's development, including rough pencil sketches, painted art, finished pencil art, black and white comps and color art of characters and settings. There's some gorgeous work in here that will be appreciated by animation fans, particularly the painted sets, which look great.

The extras wrap with a selection of Sony previews, while the Blu-ray includes a code for an HD stream and download of the film. 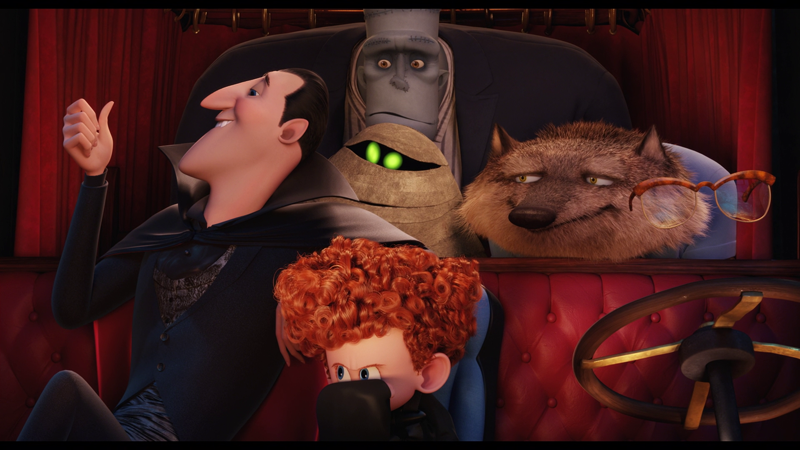 The Bottom Line
Excellently animated under Tartakovsky's direction, Hotel Transylvania 2 maintains the same innocuous level of kid-safe comedy as its predecessor, making it an enjoyable, moralistic tale for youngsters watching and a tolerable experience for the adults in the room, thanks largely to performances by some top comedic talent. The presentation is top-notch, with a nice spread of bonus content for both the grown-ups and kids, making it worth adding to any family's collection, especially if there are Sandler fans in the house.